As early returns pour in from the election in Canada on Monday, Canadian media have projected that Prime Minister Justin Trudeau will hold onto his seat.

According to the Canadian Broadcast Corporation (CBC), Justin Trudeau is the projected winner in Monday night’s election over his closest opponent, Conservative Party’s Erin O’Toole, while the fate of his Liberals remains in doubt.

Regardless of Trudeau’s projected win, the CBC noted that his candidacy put the fate of his party in serious jeopardy after climbing down from a commanding lead in August:

It’s still too early to say whether it will be a minority or majority government.

It’s still a reversal of fortunes for Trudeau. He launched this campaign in mid-August with a sizeable lead in the polls — only to see his support crater days later as many voters expressed anger with his decision to prompt an election during the pandemic’s fourth wave. Two middling debate performances by Trudeau and renewed questions about past scandals also put a Liberal victory in question.

But in the end, voters decided the Liberal team should continue to govern a country that, while battered and bruised by a health crisis, has also fared well on key pandemic metrics like death rates and vaccine coverage.

As Reuters reported early on Monday, Trudeau’s Liberals were “on track for a modest loss of seats in Atlantic Canada, the first region of the country to report national election results on Monday, in a race expected to return him to office with a fragile hold on power.” 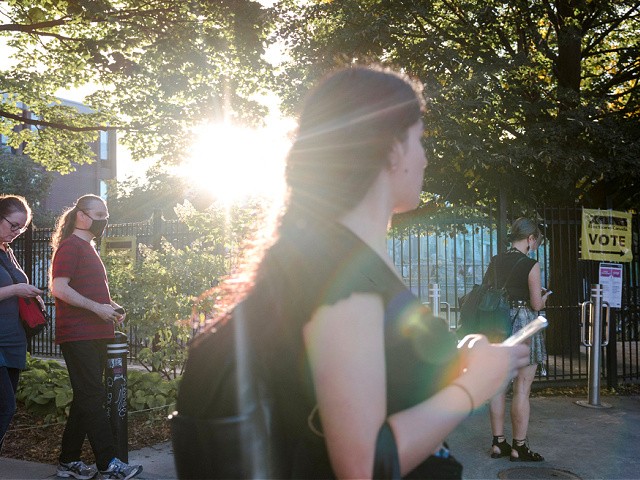 People wait in line to cast their ballots at Ecole Laurier on voting day for the 2021 Canadian election in Montreal, Quebec on September 20, 2021. – Voters lined up to cast ballots in Canadian elections that are headed for a photo finish, with liberal Prime Minister Justin Trudeau’s bid for a third term threatened by rookie conservative leader Erin O’Toole’s strong challenge. (Photo by ANDREJ IVANOV/AFP via Getty Images)

Trudeau had hoped to expand the Liberals from a minority to a majority in this election, but strategists “now concede it will be hard for the party to win a majority of the House of Commons’ 338 seats”:

In the first set of regional results, Liberals were leading in 23 of 32 parliamentary districts, called ridings, in the four Atlantic provinces. The Liberals held 27 seats before the election.

Erin O’Toole’s opposition Conservatives had focused on adding to their four Atlantic seats, and were leading in nine.

Polls closed at 9:30 p.m. EDT (0130 GMT Tuesday) in all other provinces and territories except British Columbia and Yukon. The two most-populous provinces, Ontario and Quebec, have 199 seats, or more than half of the national total.

Scott Reid, a former Liberal adviser, said while it is still too early to make any projections, Atlantic Canada results “would be worrying for the Liberals” if they signaled a national trend. Roughly 800,000 mail-in ballots for this election will not be counted until Tuesday.