The White House continues promoting coronavirus vaccine mandates, defending the imposition as a way to get more people vaccinated despite concerns it is a draconian step exceeding federal government authority.

Tomorrow, @POTUS heads to Chicago with a clear message: vaccine requirements work. Across the country, we’re seeing strong actions across industries for measures that keep workers safe from COVID-19. On this thread, I will outline just how effective these measures have been.

Biden was expected to travel to Chicago to promote vaccine mandates on Wednesday, but canceled his trip to negotiate his $5 trillion domestic spending agenda. 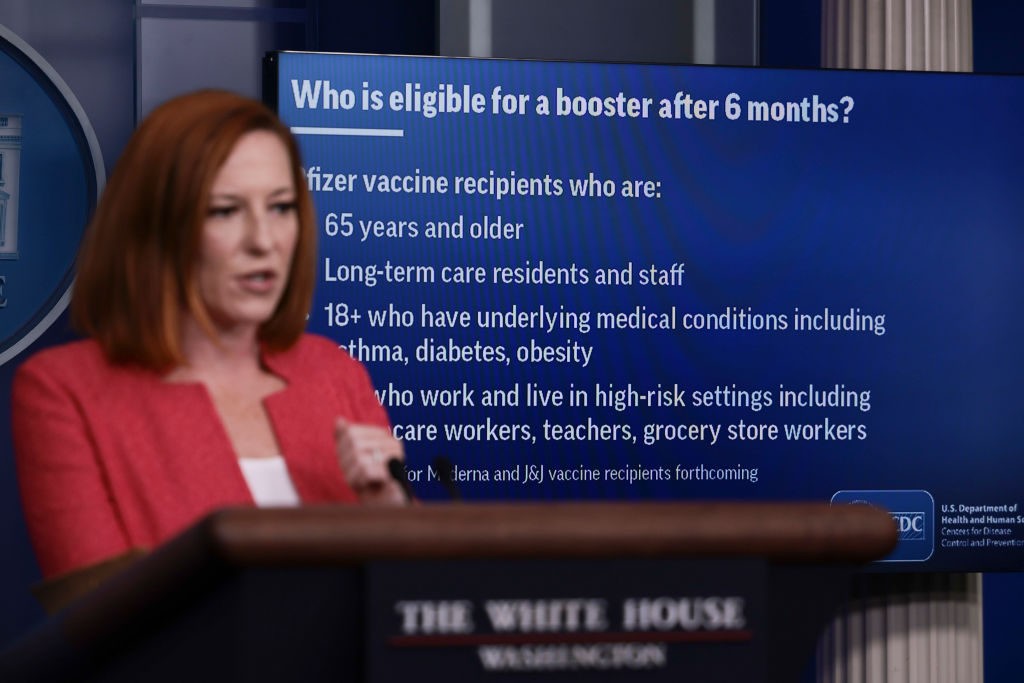 A TV screen displays details on eligibility for a Covid-19 booster behind White House Press Secretary Jen Psaki at a briefing on September 27 2021 in Washington, DC. (Anna Moneymaker/Getty)

“The American people are widely supportive of these measures,” she wrote. “A recent Fox News poll showed a strong majority were in support of these vaccine requirements.”

The Fox News poll conducted between September 12-15 showed 56 percent support for businesses requiring employees to get a vaccine.

“We’re seeing in a lot of places that this is working, it’s effective, it’s creating more certainty and protection in their workforces,” Psaki said at the daily press briefing at the White House on Monday.

But recent polling shows Americans are more reluctant to support vaccine mandates, when asked if people should lose their jobs for refusing to comply.

A Republican polling firm Trafalgar released a poll showing that 65 percent of Americans don’t believe workers should lose their job for objecting to the vaccine.

United Airlines moved Wednesday to fire 593 employees who refused to get vaccinated.

Psaki’s new support for mandates shows a dramatic turnaround from the White House position in July, when she said that vaccine mandates were “not the role of the federal government.”

“Vaccine requirements work — making all of us safer,” Klain wrote, sharing a New York Times article showing vaccination rates for New York hospital employees increased to 92 percent by the deadline to get their first dose of the vaccine.

President Biden has not issued the final enforcement vaccine mandate rule from the Occupational Safety and Health Administration — even though he announced his decision to do so at the beginning of September.

“This is not about freedom or personal choice,” Biden said about his plan to require private businesses over 100 employees to issue a vaccination mandate or face a fine. “It’s about protecting yourself and those around you.”

It is clear that Biden believes a vaccine mandate for private businesses will work, as he expressed his hope on Monday that the country could get a vaccination rate of up to 98 percent.

“Look, I think we get the vast majority — like is going on in so many – some industries and some schools — 96, 97, 98 percent,” Biden said, when asked what vaccination rate he would need to get the country back to normal.