Sen. Joe Manchin (D-WV) added another caveat to his long list of caveats in his opposition to President Joe Biden’s massive reconciliation bill: It must include the Hyde Amendment, which bars taxpayer-funded abortions.

As noted by National Review, the $3.5 trillion reconciliation bill, over which Manchin has already expressed hesitancy, contains a “Medicaid-like” provision that excludes the Hyde Amendment. Since Medicaid is typically funded by appropriations bills that require 60 votes, the Democrats had hoped to use the reconciliation bill as an opportunity to override the Hyde Amendment. The Hill reported:

Some Democrats are pushing to include a Medicaid-like program in the reconciliation package in which the federal government would step in and provide coverage in the 12 GOP-led states that have so far declined to expand Medicaid under the Affordable Care Act.

The Democrats’ proposal does not include language reflecting the Hyde Amendment.

Democrats are trying to move a massive spending package that could include the Medicaid language through a process known as budget reconciliation, which prevents it from being filibustered. This means they could move the package through the Senate with no GOP votes, but they cannot afford a single Democratic defection.

Manchin told the outlet that the reconciliation bill would be “dead on arrival” if it did not include the Hyde Amendment. 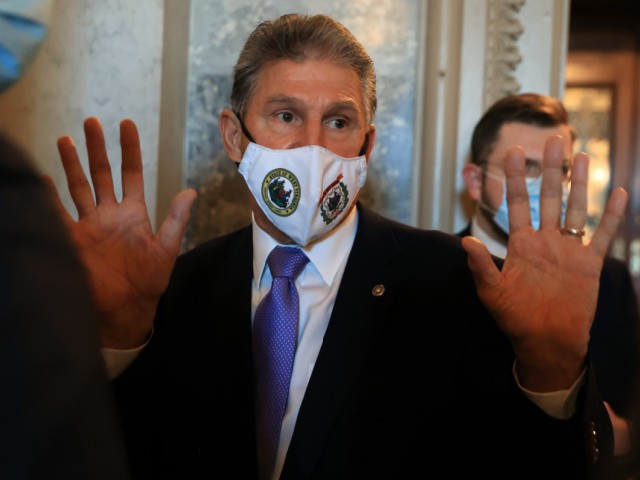 Sen. Joe Manchin (D-WV) talks very briefly with reporters after walking out of the Senate Chamber at the U.S. Capitol on September 30, 2021, in Washington, DC. A moderate Democrat, Manchin has been negotiating with his fellow senators and the White House over the spending limits on the Build Back Better Act and whether he will put the budget reconciliation plan in jeopardy. (Photo by Chip Somodevilla/Getty Images)

“We’re not taking the Hyde Amendment off. Hyde’s going to be on,” he said.

Government spending bills have included the Hyde Amendment since 1976, which President Joe Biden routinely supported until the 2020 election.

“I can’t justify leaving millions of women out of access to care they need and the ability to exercise their constitutionally protected right,” Biden said in 2019. “If I believe health care is a right, as I do, I can no longer support an amendment that makes that right dependent on someone’s ZIP code.”

Manchin told Bloomberg News this year that he would support the Hyde Amendment “in every way possible.”

“I’m going to support Hyde in every way possible."