Mexico’s government has agreed to slow and regulate the flow of migrants heading to the U.S. border, a migration expert at the Center for Immigration Studies (CIS) told Breitbart News.

Todd Bensman from CIS said he believes the agreement is part of secret negotiations between Mexico and the White house jumpstarted by Mexico’s release of thousands of mainly Haitian migrants bound for the U.S. all at once, most of whom crossed into Del Rio, Texas, and camped under a bridge near the border.

The encampment triggered a bipartisan backlash from lawmakers who blamed the mishandling of the humanitarian crisis at the Del Rio camp —albeit for different reasons — on President Joe Biden’s failed immigration policies, likely prompting the administration the make a deal with Mexico to get them to stop the flow of migrants, the CIS expert said.

That deal would give the two governments what they want — a low visibility flow of migrants for the White House and perhaps more Chinese coronavirus vaccines and concessions on immigration for Mexico.

“What the Biden people don’t want is for the migrants to come in one big chunk. They want to trickle them up so that it’s politically unnoticeable,” Bensman said. “They did that even during the [former President Donald] Trump years.”

The expert claimed the reason for the secret negotiations is that the “Biden administration is asking the Mexicans to beat these migrants. That’s really what it comes down to. It has to be done by force. The only way to shut the caravans down there is to beat them up,” he added.

“I think that they don’t want to be on the record requiring the Mexicans to do that,” Bensman pointed out. 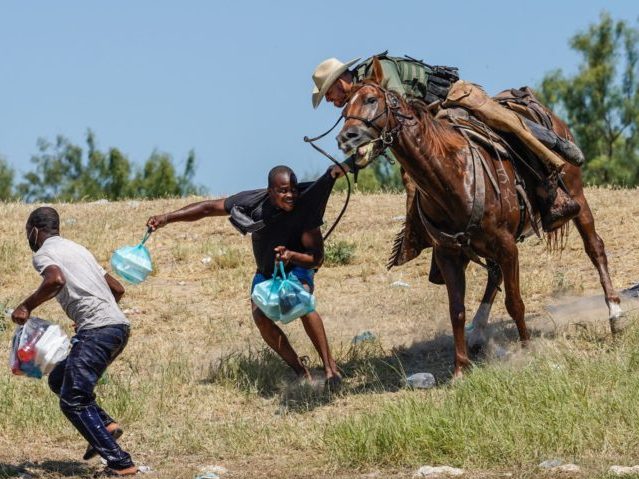 TOPSHOT – A United States Border Patrol agent on horseback tries to stop a Haitian migrant from entering an encampment on the banks of the Rio Grande near the Acuna Del Rio International Bridge in Del Rio, Texas on September 19, 2021. – The United States said Saturday it would ramp up deportation flights for thousands of migrants who flooded into the Texas border city of Del Rio, as authorities scramble to alleviate a burgeoning crisis for President Joe Biden’s administration. (Photo by PAUL RATJE/AFP via Getty Images)

U.S. Secretary of State Antony Blinken will travel to Mexico on Friday to lead an American delegation, including Secretary of Homeland Security Alejandro Mayorkas and Attorney General Merrick Garland, for high-level security talks between the two countries.

Many migration activists oppose any deal that requires Mexico to “meter” the migrants to prevent another visible Del Rio disaster.

Activist Irineo Mujica, a U.S. citizen with the nonprofit Pueblo Sin Fronteras, threatened this week that a new Haitian migrant caravan would depart for the U.S. border from southern Mexico on October 25 with or without the clearance from President Andres Manuel Lopez Obrador’s (AMLO) administration.

“This time, with [Mexican approved travel] papers or without papers, we are ready for war,” Mujica declared on social media.

Mexico’s immigration restrictions in the wake of the Del Rio disaster, which Bensman believes came at the behest of the Biden administration, have again created the sort of bottleneck of mainly Haitian migrants in southern Mexico that preceded the release of thousands of migrants that led to the formation of the makeshift camp.

After the Del Rio, a new caravan is “going to find that the Mexicans have a backbone all of a sudden,” Bensman said. “So I think they’re going to get beat up” at the request of the Biden administration.

The estimated 15,000 migrants gathered at the now-cleared camp under the Del Rio International Bridge from September 12 through 24 triggered a political crisis for President Joe Biden. 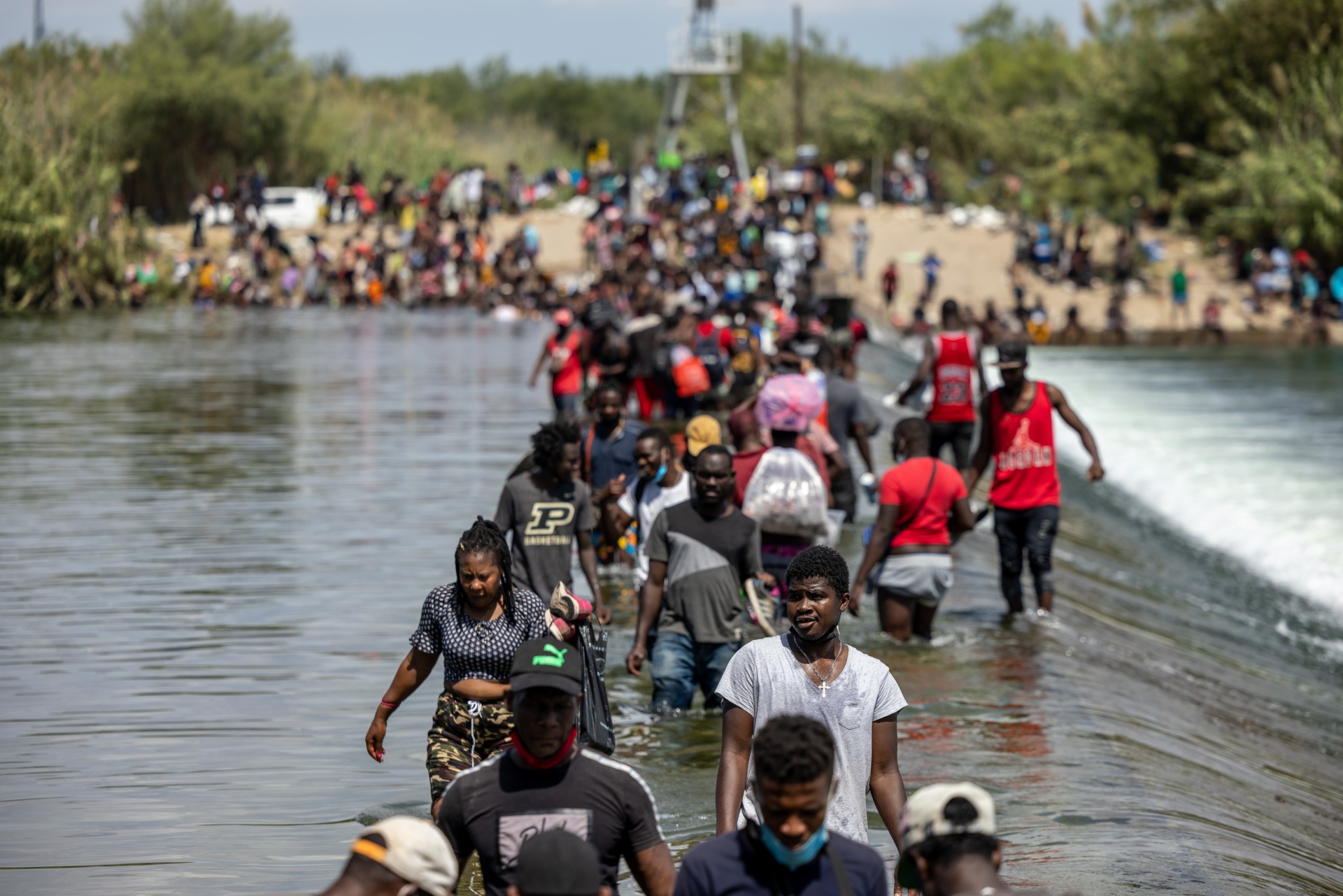 DEL RIO, TX – SEPTEMBER 18: Migrants cross the Rio Grande River near a temporary migrant camp under the international bridge on September 18, 2021 in Del Rio, Texas. The temporary migrant camp under the international bridge in Del Rio, TX has rapidly grown to more than 14,000 people and a lack of supplies has forced many migrants to cross the Rio Grande back into Mexico for basic necessities several times each day. (Photo by Jordan Vonderhaar/Getty Images)

Bensman witnessed firsthand when Mexican authorities abruptly changed everything they were doing in one day and began cracking down on the very same U.S.-bound migrants they had released days earlier.

“I’m sure there was a lot of backdoor anger and negotiations,” Bensman said, referring to the Biden administration’s reaction to the Del Rio crisis.

“The Mexican government reversed itself” and began arresting as many of the migrants as it could, again requiring them to obtain travel permits, Bensman told Breitbart News.

Before releasing them, the AMLO administration forced the migrants to wait in southern Mexico for the so-called permits that never came, creating a bottleneck of thousands of migrants that the Mexican authorities ultimately released all at once.

Suggesting that there was coordination between the Biden administration and Mexico over dealing with the Del Rio debacle, DHS Secretary Mayorkas told USA Today, “Critical to preventing it is the fact that not only did we learn from it, but the lesson is shared with our partners to the south,” he said, without elaborating. 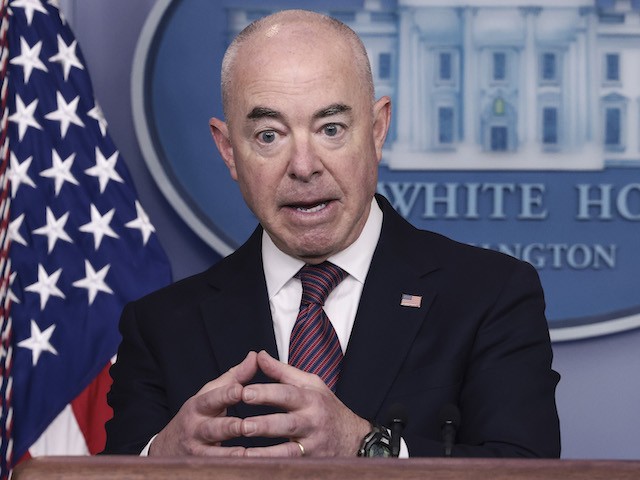 Homeland Security Secretary Alejandro Mayorkas gestures as he speaks at a press briefing at the White House on September 24, 2021 in Washington, DC. (Anna Moneymaker/Getty Images)

He added that the Biden administration is ready to deal with the influx of more Haitians amid reports. As of the end of last month, the number of Haitians taken from the camp in Del Rio released into U.S. communities exceeded those who had been removed.

The CIS expert believes Mexico, unafraid of how the Biden administration would react, released the migrants who camped in Del Rio to create a more pleasant environment for the country’s special El Grito national independence celebrations, free of migrant protests.