We’re in the middle of a transportation crisis, and Pete Buttigieg is sitting at home. Meanwhile, cargo boats are unable to dock and shelves are sitting empty. Pete needs to either get back to work or leave the Department of Transportation. It’s time to put American families first.

Blackburn’s comments come after Politico reported that Buttigieg has been on paid leave since mid-August, electing to spend time with his husband, Chasten, and their two newborn babies rather than doing his job as transportation secretary.

“For the first four weeks, he was mostly offline except for major agency decisions and matters that could not be delegated,” said a spokesperson for the Department of Transportation. “He has been ramping up activities since then.” As he does that, Buttigieg will “continue to take some time over the coming weeks to support his husband and take care of his new children,” the spokesperson added.

On September 22, ports in both Los Angeles and Long Beach reported more than 150 ships docked in port, which included 95 container ships. The number of ships docked Wednesday was more than double that of pre-pandemic averages when the ports typically dealt with 60-70 ships at once.

Americans are beginning to feel the impact of these supply chain disruptions as they hurt 88 percent of small business owners. These disruptions will also impact Americans during Christmastime. The White House admitted “there will be things you can’t get” for Christmas while we battle with the supply chain issues. 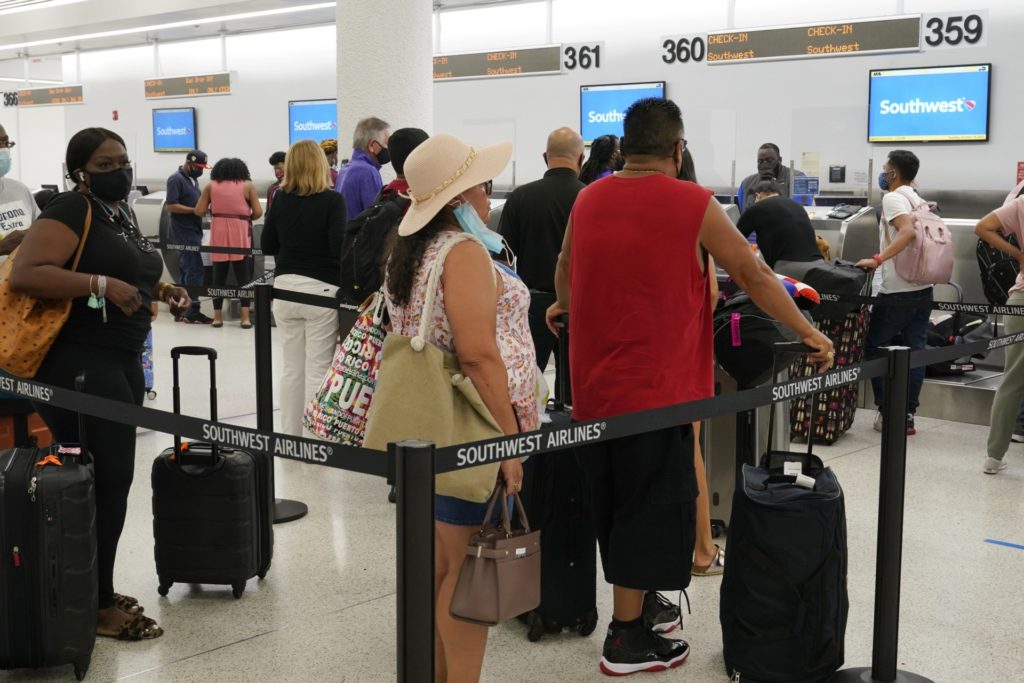 Southwest passengers wait to check in at Miami International Airport, Tuesday, Oct. 12, 2021, in Miami. Southwest Airlines appears to be fixing problems that caused the cancellation of nearly 2,400 flights over the previous three days. (AP Photo/Marta Lavandier)

Port delays are not the only issue currently affecting American transportation. Beginning last weekend and continuing into this week, Southwest Airlines canceled over 2,000 flights and delayed hundreds more.

Although federal workers are now eligible for paid leave, as cabinet secretary, Buttigieg is not eligible for the benefits afforded to lower-level federal workers. “Individuals in the executive branch who are appointed by the President to positions in the Executive Schedule are not covered by the leave system,” an Office of Personnel Management spokesperson said. “They do not earn leave and serve at the pleasure of the President. The President can choose to allow him to take time off.”