Democrats on Thursday continued to struggle to seal President Joe Biden’s far-left reconciliation package despite the endless optimism some Democrats are publicly displaying.

Sen. Jon Tester (D-MT) told Fox News the $3.5 trillion reconciliation package is close to being completed. “I think we’re very, very close to having a deal,” he said. “When I talked to the White House Day before yesterday and I think it’s just a matter of not letting the perfect be the enemy of the good… The top line is what’s important.”

“We’ve rounded the turn, and we’re almost to the stretch,” House Speaker Nancy Pelosi (D-CA) echoed Tester Thursday. “And we’re making great progress to our goal of securing a framework agreement for Build Back Better in a timely fashion.”

Sen. Joe Manchin (D-WV), however, has different ideas, telling reporters the deal between him and the far-left will not be done “anytime soon.”

Biden’s Build Back Better agenda, which has been delayed due to Manchin and Sen. Kyrsten Sinema (D-AZ), has other Democrats frustrated on the postponed timeline and the number of items being scrapped from the proposal.

One of those frustrated is Rep. Maxine Waters (D-CA), who is upset over the reduced subsidies for free housing due to the negotiations. “We cannot build back better without investing in our nation’s crumbling housing infrastructure. Housing is not a miscellaneous afterthought, a nice-to-have, a ‘something that can wait until later,'” Waters said. 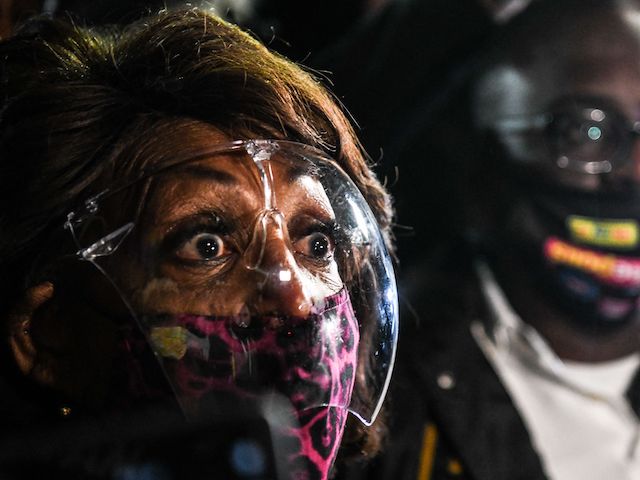 Rep. Maxine Waters (D-CA) speaks to the media during an ongoing protest at the Brooklyn Center Police Department in Brooklyn Centre, Minnesota, on April 17, 2021. (Chandan Khanna/AFP via Getty Images)

Sen. Chuck Schumer (D-NY), who signed an agreement with Manchin to reduce the topline number of the massive spend and tax package to $1.5 trillion, said Wednesday in a floor speech no Democrat will “get everything they want.”

“Everyone is going to have to compromise if we are to find that legislative sweet spot that we can all get behind. Nobody will get everything they want,” Schumer (D-N.Y.) said.

Sen. Dick Durbin (D-IL), the number two Senate Democrat, admitted to reporters that Biden and the far-left oversold their idea of increasing the welfare state by the largest amount since Lyndon Johnson’s Great Society in the 1960s. “We oversold it and underperformed for too long. But now we get a chance to close it the right way,” Durbin said. 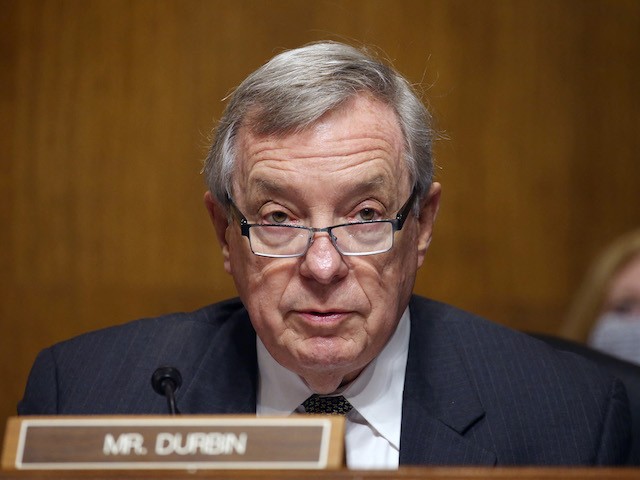 Sen. Dick Durbin (D-IL) makes his opening statement during a hearing of the Senate Judiciary Subcommittee on Privacy, Technology, and the Law, at the US Capitol in Washington, DC, on April 27, 2021. (Tasos Katopodis/AFP via Getty Images)

Thus far, radical Democrats have lost the extended child tax credit from the coronavirus package in March, which would only be lengthened for a year, while subsidized family leave benefits would also be reduced from twelve weeks to four. Free community college also is reportedly canceled.