President Biden’s 11-point drop in averaged approval ratings over his first three quarters in office marks the most significant decline in approval during the same point in any presidency since 1953, according to Gallup.

Since September, the United States has dealt with supply chain issues, a worker shortage, and inflation.

In August, his rating hovered at 49 percent, but the disastrous withdrawal from Afghanistan, which resulted in the death of 13 U.S. servicemembers likely led to the six-point drop between August and September, according to Gallup: 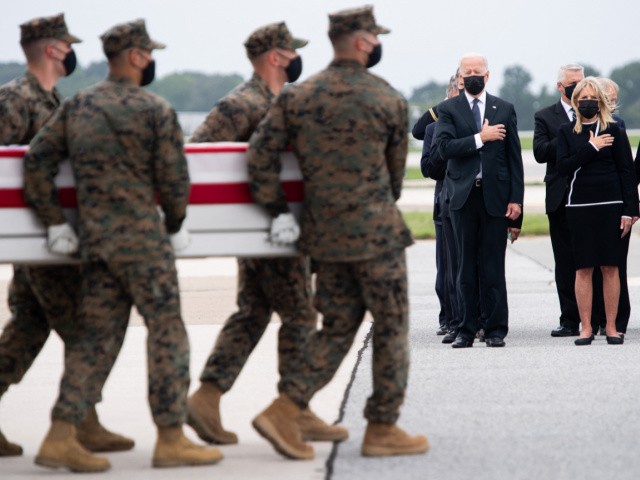 US President Joe Biden(C) attends the dignified transfer of the remains of a fallen servicemember at Dover Air Force Base in Dover, Delaware, August 29, 2021, one of the 13 members of the US military killed in Afghanistan last week (SAUL LOEB/AFP via Getty Images).

Gallup’s latest survey, conducted from October 1-October 19, shows that 92 percent of Democrats approve of Biden’s performance, while 6 percent of Democrats disapprove, according to Gallup. Among Republicans, four percent approve of the job Biden is doing, while 94 percent disapprove. “The 88-point partisan gap in job approval is the largest for Biden thus far in his presidency and ranks among the largest in more than eight decades of Gallup measurements of presidential approval,” Gallup reports.

The three Democrat presidents who preceded Biden all had sharp drops in approval that are similar to Biden’s at the same point during their tenures in office, according to Gallup. Barack Obama dropped ten points between his first- and third-quarter averages, Bill Clinton fell seven percentage points, and Jimmy Carter’s approval rating declined nine points. The last Democrat president to gain public support between his first and third quarters was John F. Kennedy, whose approval rating climbed 2.5 points.

Gallup’s latest poll was conducted October 1-October 19 and randomly sampled 823 adults older than 18 years of age throughout all 50 states and Washington, DC. The margin of error is plus or minus four percentage points and the confidence level of 95 percent.