Jayapal told reporters she and her caucus remain as holdouts until both the $3.5 trillion reconciliation package and the $1.2 trillion “bipartisan” infrastructure are voted upon immediately after one another.

Democrat leadership has floated the idea of voting on the “bipartisan” bill with only a framework in place for the reconciliation package. But allowing one measure to pass without a vote on the other would reduce the leverage the far-left has worked to maintain.

The demands to have the reconciliation package written could take weeks longer. Only parts of the package are reported to be written. The legislative text of the package is important to the far-left because it would guarantee certain radical provisions would be included. 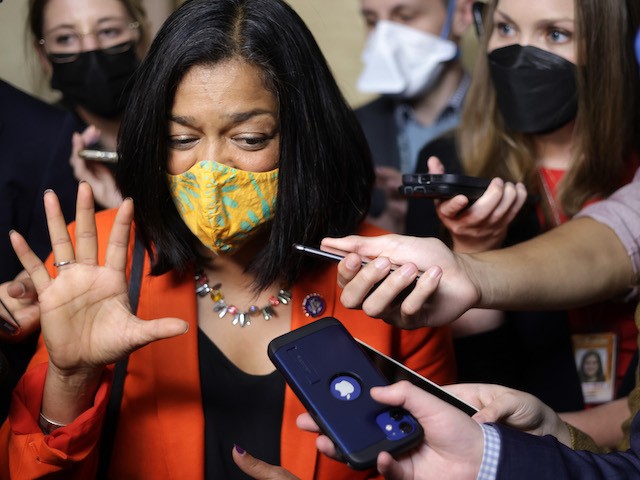 Rep. Pramila Jayapal (D-WA) speaks to members of the press outside a House Democratic caucus meeting at the U.S. Capitol on October 1, 2021 in Washington, DC. (Alex Wong/Getty Images)

“As Sen. Manchin said, you don’t really know everything that’s in here until the text [of the reconciliation package] is drafted. And my understanding is that we’re pretty close on the text, so let’s just get it right, let’s get it done,” Jayapal said. Hopefully we can do it within a week at the most.”

“Obviously there’s two senators we have to get full agreement from,” Jayapal said about Sen. Joe Manchin (D-WV) and Sen. Kyrsten Sinema (D-AZ). “We’re really close, and I think if we can just take another week and finalize all these details and get the language done and vote [on] both the bills. I think we’ll be in good shape.”

“The vast majority of our priorities are in, but there are a couple of areas where that’s still not the case,” Jayapal added. “What we’ll continue to do is push as hard as we can, but just recognize that there are 50 senators and we have no margin in the Senate.”

Jayapal’s reference to the ticking clock to pass the largest welfare spending measures since Lyndon Johnson’s Great Society in the 1960s comes as Biden is feeling the pressure to find a legislative win. Biden is presumably seeking a triumph this week to help two Democrat gubernatorial candidates in elections this coming Tuesday.

Only the peasantry must wear masks. Democrat Elites can do whatever the hell they please. Now mind your betters and don your obedience masks, peasants! #EliteLogic https://t.co/DhN6SfBMfm

Biden and the Democrats are facing governor races in Virginia and New Jersey, which are closer than expected. The races are considered bellwether races for the 2022 midterms. A defeat for Biden and his Democrat Party in either state would effectively stall the president’s agenda moving into an election year.