CNN and CBS News are up in arms over Missouri’s Second Amendment Preservation Act (SAPA), suggesting it endangers people by preventing local law enforcement from working with federal agents on matters related to gun control.

Throughout my law enforcement career and now as Governor of the state of Missouri, I have and always will stand for the Constitution and our Second Amendment rights. This legislation today draws a line in the sand and demonstrates our commitment to reject any attempt by the federal government to circumvent the fundamental right Missourians have to keep and bear arms to protect themselves and their property.

On November 5, 2021, CNN explained that legislators “in at least 17 states have introduced bills this year taking aim at possible federal gun restrictions.” They noted that the bills in the 17 states vary in degree but suggested that Missouri was a state that went too far in the language used against federal gun control. 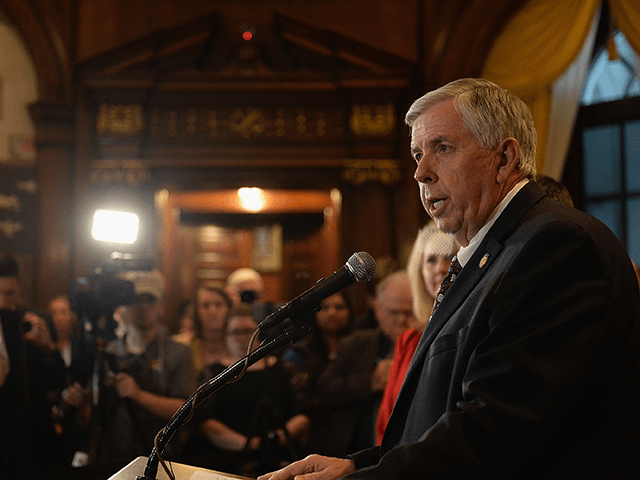 Missouri Governor Mike Parson addresses the media on the last day of the legislative session at the Missouri State Capitol Building on May 17, 2019, in Jefferson City, Missouri. (Michael B. Thomas/Getty Images)

CNN spoke with University of Illinois’ Professor Alexandra Filindra about Missouri’s law, and Filindra described it as “part of an ideological system” which rests on the assumption “that the other side — in this case, the Democrats — are devious and intent on taking political rights away and imposing a socialistic tyranny.”

Filandra added, “Information that conflicts with this narrative is dismissed. Saying Biden is a Democrat and coming for your guns is a great way to motivate anger and get people to vote in the midterm, especially.”

On November 7, 2021, CBS News spoke with two prosecutors who have issues with SAPA.

Butler County, Missouri, prosecutor Kacey Proctor said, “What I oppose about it, and what I would ask for to be– to be looked at and possibly fixed is the ability for law enforcement officers to interact with their federal partners to go after people who are violent in nature and are– committing crimes in our community.”

KMIZ pointed out upon signing SAPA, Gov. Parson intimated the law was necessary to help federal lawmakers understand that restrictions passed under the Biden administration would face opposition in Missouri.

Parson said, “[SAPA] puts those in Washington D.C. on notice that here in Missouri we support responsible, law-abiding gun owners, and that we oppose government overreach and any unlawful efforts to limit our access to firearms.”