The CBO, which marks how much money taxpayers must fork over to pay for the legislation, is not scheduled to have a complete score on Biden’s reconciliation framework before Pelosi and Jayapal whip a vote for the package. The two congresswomen suggested Tuesday they intend to hold a vote on the legislation on or before November 15. But the CBO said Tuesday only parts of the scoring will be completed before the target vote date.

“We anticipate releasing estimates for individual titles of the bill as we complete them, some of which will be released this week.,” the CBO explained. “Other estimates will take longer, particularly for provisions in some titles that interact with those in other titles. When we determine a release date for the cost estimate for the entire bill, we will provide advance notice.” 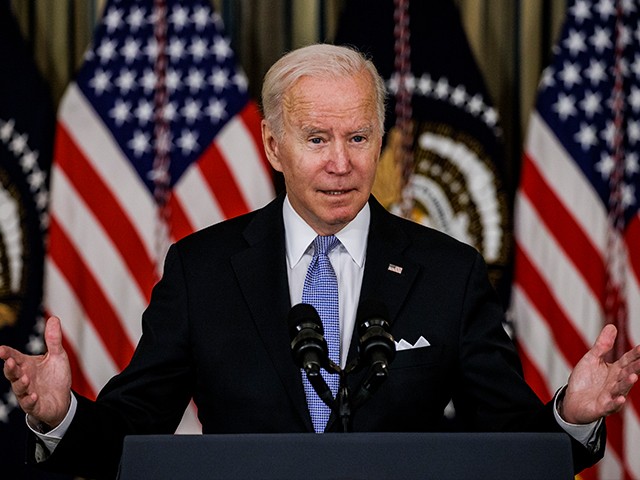 President Joe Biden speaks during a press conference in the State Dining Room at the White House on November 6, 2021, in Washington, DC. (Samuel Corum/Getty Images)

A likely incomplete CBO score will not prevent radical Jayapal from plunging ahead in the House, pushing “moderate” Democrats to go along with the reconciliation package without knowing how much it will cost.

“To clarify for everyone: the agreement we made w/our colleagues was NOT for CBO score,” Jayapal said of the deal she apparently cut with the moderates. “It was for some additional financial information from CBO. Agreement also says that in no event would the vote take place later than the week of Nov. 15. We trust our colleagues’ commitments.”

Pelosi echoed her consent on Tuesday to Jayapal’s rushed schedule. “That is our plan – to pass the bill the week of November 15th, as is indicated in our statements that were made at the time of passing the infrastructure bill,” Pelosi said in Glasgow, Scotland.

The Democrat House leaders are seemingly aiming to force the less radical side of the caucus to take a vote on a package that would likely increase the national debt and cost American taxpayers at least $2.40 trillion.

In order for Pelosi to successfully pass the package out of the House, she needs 218 votes spread across the Democrat caucus. It is probable House Democrats will not have any help from the 13 Republicans who voted for the “bipartisan” infrastructure bill Friday night.

Whether Pelosi can whip the votes to pass the measure remains unseen but not out of the question. Less radical and more vulnerable House Democrats have opposed voting for the package without a CBO score. But with such a massive piece of spending, there is sure to be payouts to members’ districts to entice a “yes” vote.

If vulnerable Democrats do vote for the package without a score, Republicans would be able to highlight their vote in the 2022 midterms as partisan and negligent.