CNN followed up the Kyle Rittenhouse “not guilty” verdict by leading with an op-ed from John Blake proclaiming there is “nothing more frightening in America today than an angry white man.”

Putting it as the lead on the front page with a photo of the acquitted Rittenhouse, the op-ed essentially lumped the 18-year-old in with men like Jacob Chansley, a.k.a the “QAnon shaman,” and the white supremacists who participated in the “Unite the Right” rally in Charlottesville. 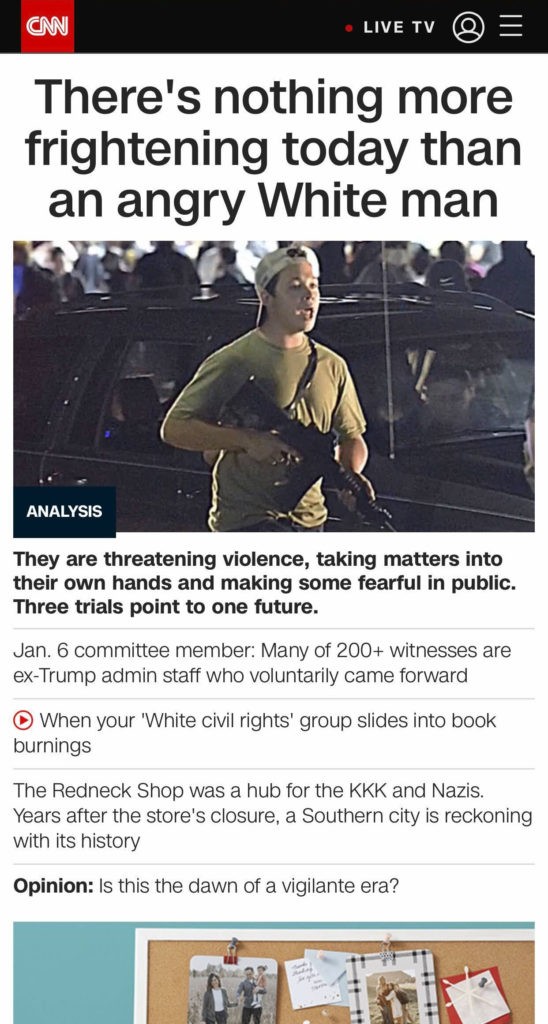 Though Blake admitted the “vast majority of White men are no menace to society,” citing the numerous left-wing men who “wallowed tear gas and braved rubber bullets while marching with demonstrators during last year’s protests over the murder of George Floyd,” Blake asserted that the time has come to put a certain character trait on trial: “a vision of White masculinity that allows some White men to feel as if they ‘can rule and brutalize without consequence.’”

“This angry White man has been a major character throughout US history,” Blake lamented. “He gave the country slavery, the slaughter of Native Americans, and Jim Crow laws. His anger also helped fuel the January 6 insurrection at the Capitol.”

“It’s this angry White man — not the Black or brown man you see approaching on the street at night — who poses the most dangerous threat to democracy in America,” he continued.

Lest people accuse him of racism, Blake admitted his statement condemning white men so broadly was a “sweeping claim” while maintaining that the rise of the angry white man, fueled in part by former President Trump, has led to a spike in political violence. His chief example: Rep. Paul Gosar (R-AZ) sharing an anime cartoon in which he kills socialist Rep. Alexandria Ocasio-Cortez (D-NY) with a sword. Though Blake acknowledged the 2017 attack in which a Bernie Sanders supporter attempted to assassinate Republican members of Congress, he believes that too many white conservatives fantasize about killing their opponents:

Talking about assaulting and killing political enemies has become so normal — and seemingly acceptable — in conservative circles today that a White man felt comfortable enough to ask a right-wing activist at a public forum in Idaho last month:

“When do we get to use the guns? … How many elections are they going to steal before we kill these people?”

Add to this toxic political atmosphere another element: Laws that not only protect White vigilante violence but, in some cases, seem to embolden vigilantes.

Blake further feared that the conservative-leaning Supreme Court could make gun ownership more legal throughout the United States, which would therefore encourage vigilante justice similar to what America witnessed during the post-Civil War reconstruction. He cited the January 6 riot on Capitol Hill as a “sequel” to those violent years.

“That period, known as Reconstruction, was destroyed primarily by the violence of White men who used terrorist and vigilante groups like the KKK to assassinate elected officials, prevent Blacks from voting and overthrow state government,” Blake said.

“The January 6 insurrection wasn’t unprecedented. In many ways, it was a sequel,” he added, citing an 1898 case in Wilmington, North Carolina, where white supremacists killed members of the multi-racial local government.

Blake did not so much as even acknowledge how the wave of angry far-left activists (black and white) burned their way across the United States in 2020, destroying businesses, homes, and neighborhoods.

Blake concluded his piece with a warning that Rittenhouse and other cases point to a frightening future.

“This is what that future looks like: More angry White men emboldened by ‘stand your ground’ and citizen’s arrest laws, inspired by a conservative interpretation of the Second Amendment. And more dead Americans,” he concluded.

The “not guilty” verdict in the Rittenhouse trial has led to scores of far-left media figures lamenting that white supremacy will go unchecked. Speaking on MSNBC, NAACP President and CEO Derrick Johnson even went as far as to say that the Rittenhouse acquittal was worse than the acquittal for those who killed Emmett Till.

“This was worse than the Emmett Till trial. This was worse [than] so many trials where we know, for a fact, individuals committed murder and yet they were not brought to justice,” Johnson said. “It is unfortunate, but this is America.”

This only further validates the need to abolish our current system. White supremacy cannot be reformed.