The federal government will run out of money on Friday amid a jammed Senate schedule in December that may further delay the passage of the $1.9 trillion reconciliation package into next year.

Along with funding the government in December, the Democrat-controlled Senate must raise the debt ceiling before December 15 and pass the National Defense Authorization Act (NDAA), a typically bipartisan piece of legislation for 60 years.

The reconciliation package is also in the mix to be pushed through the chamber, though the clogged Senate calendar may delay the passage until January.

Funding the government, however, is the most immediate crisis for the Senate Democrats. Democrats’ strategy may be to introduce a stopgap funding bill potentially on Wednesday. The stopgap funding would need approval from Senate Republicans and Sen. Mitch McConnell (R-KY), “but that isn’t expected to be a major problem,” Punchbowl News reported. 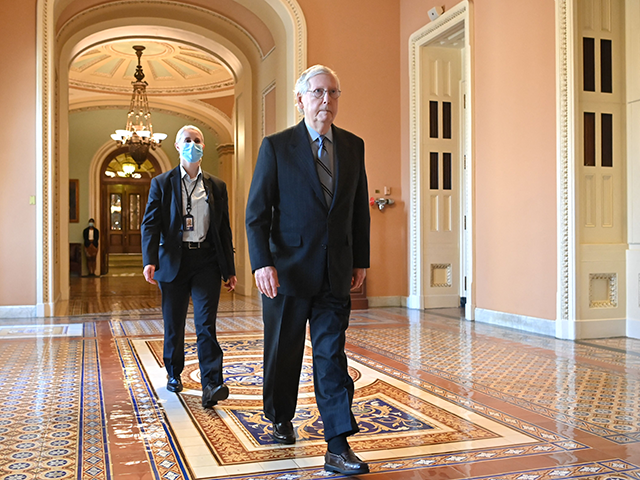 If Republicans cave and help Democrats fund the government, the funding may reportedly last until the last week in January.

McConnell wrote to Biden that Schumer “poisoned the well” in a Thursday rant on the Senate floor by suggesting “Republicans played a risky and partisan game” with the debt ceiling. “And I am glad their brinkmanship didn’t work,” Schumer said Thursday, not acknowledging that McConnell helped Schumer raise the debt ceiling with 11 votes.

As a result of the offensive, partisan speech, McConnell told the White House he will not be a part of any additional “assistance” in increasing the debt limit.

The NDAA is also a major piece of legislation requiring Senate approval. Republicans and Democrats were not able to agree on the measure before Thanksgiving, so debate will continue into December. The measures under consideration are “repealing the 1991 and 2002 Iraq AUMFs, women in the draft, China,” Afghanistan, and other measures impacting the military-industrial complex.

Sen. Joe Manchin (D-WV) and Sen. Kyrsten Sinema (D-AZ) are unlikely to vote for the House’s package as is, as it is chock full of far-left goodies, such as subsidized prescription drugs, enhanced Medicare coverage, two free years of community college, amnesty, free housing, and free child care.