“The Rubio amendment is a poison pill in the sense that it blows up the bill,” Schumer said during a rant on the Senate floor.

Senate Republicans and even Democrats have criticized Schumer for waiting so long to bring the National Defense Authorization Act (NDAA) to the Senate floor for a vote. The defense bill authorizes the Pentagon’s yearly budget and its activities and is considered must-pass legislation.

Republicans have objected to Schumer now wanting to pass the NDAA with a limited number of amendments, but on Wednesday there were negotiations with Schumer on a list of 25 amendments that all 100 senators could unanimously consent to adding to the NDAA.

However, Rubio objected to the move since his amendment was not included in the list. Rubio’s amendment would effectively ban the import of solar panels made with Uyghur slave labor in China, and is reportedly opposed by the Biden administration. 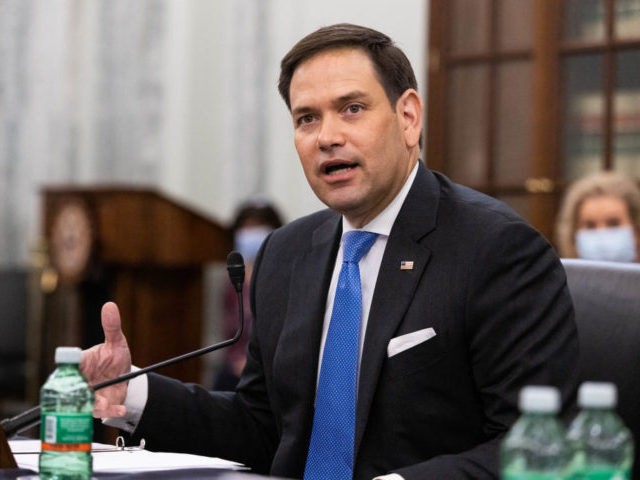 Schumer claimed that Rubio’s amendment, if attached to the NDAA, would kill it altogether since it would produce revenue and any bill that produces revenue would have to come from the House, and the House would kill the bill.

Schumer said on the Senate floor:

The senator from Florida stood in the way of us moving forward. The Senate rules…allow any one senator to block us from moving forward and the senator from Florida insisted on his amendment. The irony, the sort of absurdity and the sadness of this is if his amendment were on the bill, it would automatically kill the bill. Because it would be what’s called ‘blue-slipped’ I the House, which means that any bill that produces revenue must start from the House and the House will kill a bill that has an amendment that contains it.

Can you get more absurd than this? It makes no sense, no sense whatsoever, I would ask Marco Rubio to sleep on this overnight.

Rubio blasted that argument in a Senate floor speech, saying Democrats are broadly interpreting the clause in the Constitution about revenue generation starting in the House to prevent his amendment from being included in the bill.

“They can just apply it to anything they don’t like. And so this is really not about revenue generating…This is about the fact that they don’t want the bill to pass over in the House,” he said.

Rubio noted his bill to ban the import of goods made with Uyghur slave labor already passed in the Senate earlier this year with bipartisan support, but that the House version of his bill has been held up in the House, reportedly due to pressure from Biden’s climate czar John Kerry.

Kerry has publicly voiced concern the bill would prompt China not to cooperate on climate change, but there is also evidence Kerry has financial ties to Chinese companies that produce solar panels with Uyghur slave labor, as reported by Breitbart News and other outlets.

Rubio also cited companies such as Apple and Nike that have also lobbied against the bill. “They make a lot of money by making stuff by people who aren’t paid to make it. And they’re lobbying against this thing,” he said.

“The bottom line is the House doesn’t want to pass this or at least some people over there don’t,” he said. “If this was a revenue issue…pass the House version of our bill and send it over here and it becomes the law. … You know why they haven’t done that? Because they’re not for this. They’re not for it. And they wield the blue slip thing to mean whatever they want it to mean,” he added.

Rep. Jim Banks (R-IN), chairman of the Republican Study Committee, tweeted, “Just goes to show that that Chuck Schumer is not at all interested in holding China accountable. Thanks for your leadership @marcorubio!”

Just goes to show that that Chuck Schumer is not at all interested in holding China accountable. Thanks for your leadership @marcorubio! https://t.co/Q99PGO91ZJ

Sen. Mitt Romney tweeted: “.@MarcoRubio is right: the bill to penalize China’s products made with slave labor — which unanimously passed in the Senate — should now become law.”

.@MarcoRubio is right: the bill to penalize China’s products made with slave labor—which unanimously passed in the Senate—should now become law. https://t.co/0iNy6llxiL