Former President Donald Trump told Breitbart News exclusively that he thinks it is “laughable” to claim the media are tougher on President Joe Biden than they were on him.

“They are treating him [Biden] with kid gloves,” Trump responded when asked in an interview to respond to a Washington Post column that claimed the media are tougher on Biden than they were on him.

Trump appeared on the program to promote his new book, Our Journey Together, a collection of photos from his time in the White House. The book, which is available at 45Books.com, is published by Winning Team Publishing and has now sold more than 140,000 copies since it was first released.

Trump’s comments came in response to a column from Dana Milbank in the Post, which Biden’s chief of staff, Ron Klein, also promoted on his Twitter account endorsing the sentiment Trump considers “laughable”–that the media are tougher on Biden than they were on Trump. 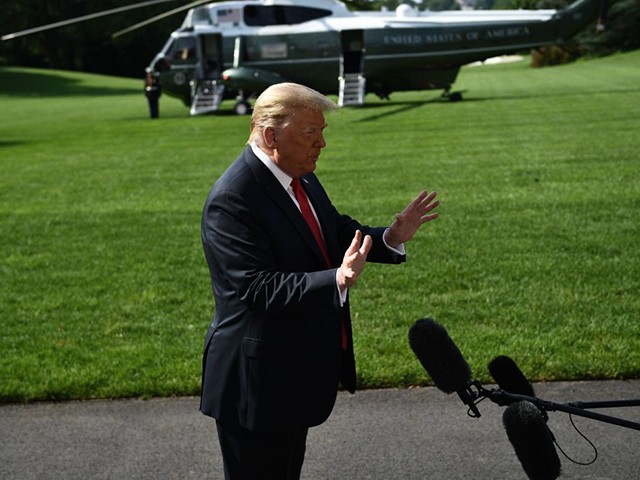 US President Donald Trump speaks to the media on the South Lawn of the White House before departing, en route to Arizona on June 23, 2020, in Washington, DC. (BRENDAN SMIALOWSKI/AFP via Getty Images).

“The media treats Biden as badly as — or worse than — Trump. Here’s proof” was the headline of Milbank’s column, which cherry-picked a handful of negative headlines on Biden that several establishment media outlets have run in recent weeks.

“Submitted for your consideration,” Klain, Biden’s chief of staff, shared on social media with a link to the article.

Trump, as he made clear in the Breitbart News exclusive, however, clearly does not see it that way. He noted that the media ignored major accomplishments of his administration and media outlets regularly cover up for Biden’s failures.

“We’ve done things that nobody has ever done,” Trump said. “Peace in the Middle East—we would have had that also, but we had four countries sign. We would have had peace—the Abraham Accords, it’s called. So many different things. I will say, at the end, people are starting to see we did a massive amount of work, whether it was military or taxes or all the different things we did. We had a great economy with no inflation. I did it twice because I had to rebuild it after COVID hit the world. The world was hit actually relatively harder than us. I think it’s not even a contest. I think they’re treating him with kid gloves. You know why? There’s so much damage that has been done to our country, and this new bill, this Build Back Worse bill, is just a disaster—a disaster for the country.”

Another clip from Trump’s interview that aired on Thursday morning demonstrates just how much he despises Senate Republican leader Mitch McConnell. 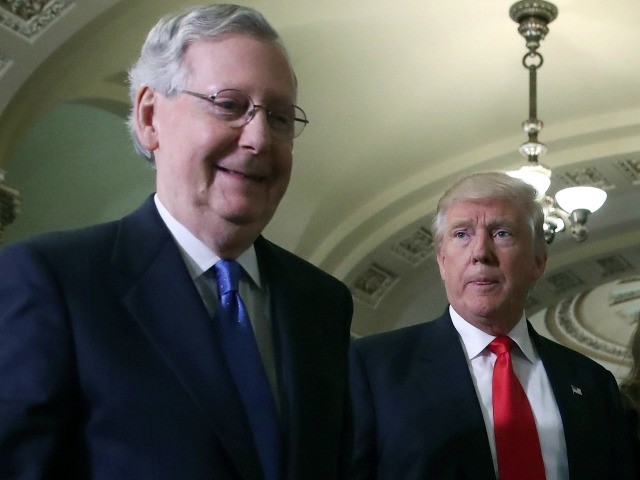 “I got him elected because when I endorsed him and helped him with his commercials and other stuff, I got him elected,” Trump said. “I regret I didn’t run somebody in the primary against him because he’s been terrible. He’s now giving it away with the debt ceiling. He could have used the debt ceiling to get rid of Build Back Worse. He could have used it, and he would have won. It’s a powerful thing. He gave it away today for nothing. He got nothing from it. Also, breaking up the bill was a disaster because it made it much easier to get this catastrophe that’s getting ready to come—they’re not going to be able to be stopping it. If you kept it together, it was tougher to get the votes. Then, of course, he gave them a two-month extension. What was that all about? That gave them time to get their act together, and they did. They’ll probably be passing this other one, and I’ll say more then probably; it’s going to be almost definitely passing. With the debt ceiling, he could have killed the other one. He could have said no debt ceiling, we’re not going to go along with it unless you stop with the Build Back Worse bill. He didn’t do that. He didn’t do that. Even with the wall, it took almost two and a half years of litigation by mostly the Democrats—11 different lawsuits, and we won, won them all. It took two and a half years, but then we built it, and another three or four weeks, and it would have been finished, but then he [Biden] decided not to build it. He [McConnell] should have said that with the ‘Unfrastructure’ bill—that’s the infrastructure bill, but because there’s very little infrastructure, I call it the ‘Unfrastructure’ bill. There’s only 11 percent infrastructure—but they could have said just for the asking, ‘We’re not going to give you those 19 votes.” They gave them 19 votes. What a shame, including McConnell. He should have said, ‘You got to finish the wall or we’re not going to do it, and they would have done it.”

More from Trump’s interview will come this weekend.

LISTEN TO CLIPS FROM TRUMP INTERVIEW WITH BREITBART NEWS: