Hunter Biden has revealed the humble ethos that drives his newfound love of painting. He told Vanity Fair a recent Manhattan gallery show left him thrilled because “I wasn’t there to sell my art” and people going “wow” is its own reward.

The president’s son opened up about his self-effacing objective in the magazine interview, explaining the creative process satisfies him rather than tawdry suggestions he is only in it to trade off the family name.

Hunter claims about 95 per cent of the people at his recent opening in New York City were people he knew rather than art speculators. They included such celebrities as Moby, graphic artist Shepard Fairey – who designed the Obama ‘Hope’ poster – and Sugar Ray Leonard.

He called putting paint on canvas “the most true thing that I’ve ever done,” after previously saluting himself for his “courageous” work and business model.

Even though Hunter is eschewing the pursuit of dollars for paintings, others are interested in why he is doing it at all.

As Breitbart News reported, Rep. Mo Brooks (R-AL), a candidate for Alabama’s U.S. Senate seat up for grabs in 2022, has called for a full select committee investigation into Hunter Biden’s art dealings.

The Alabama Republican suggested the investigation take place once Republicans took control of the House of Representatives after the 2022 elections. 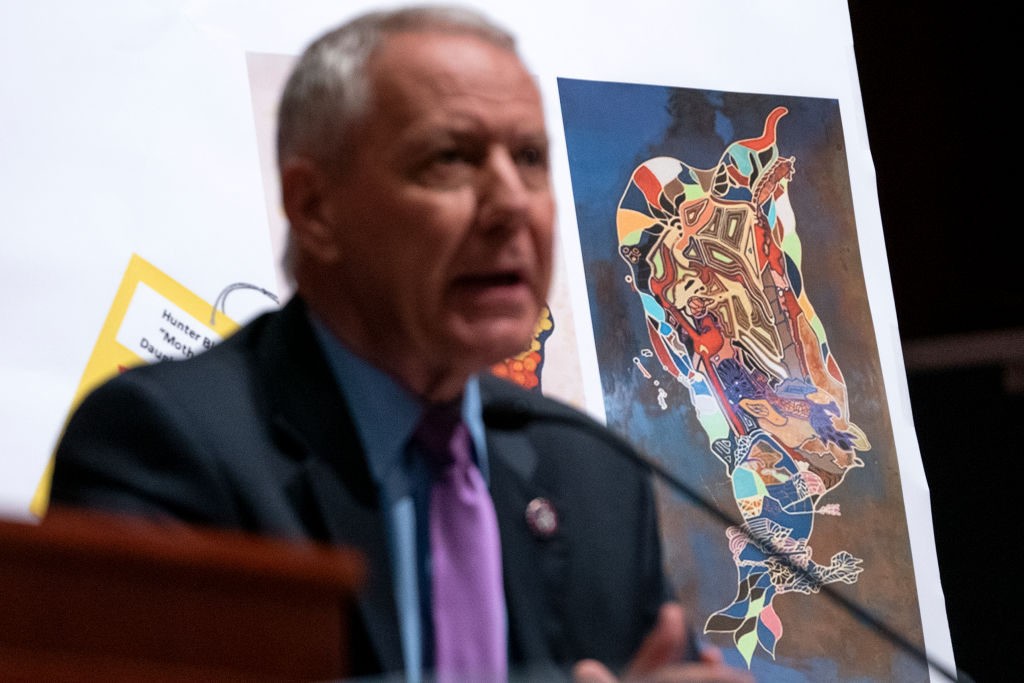 “While Socialist Democrats claim you can identify as just about anything you want, everyone can agree that Hunter Biden can’t identify as an artist,” Brooks said in a statement given to Breitbart News.

“Despite this, his paintings sell for tens of thousands of dollars. The White House released a report that the art market is ripe for financial corruption. Yet somehow, they claim Hunter is immune from this. It’s quite apparent that people are not paying these outrageous prices for the ‘art.’”

Others are just as worried about the principles involved in those who sell art to anonymous buyers – including the White House, which has flagged the practice for investigation.

Hunter has reportedly sold multiple pieces of art for at least $75,000 this fall to anonymous buyers, and the New York Times reported first lady Jill Biden has allegedly displayed Hunter’s artwork in the White House.

There are critics enough who simply pan the works as amateur and contrived daubings of an enthusiast who can somehow hold exhibitions where paintings are sold for up to $500,000.

Hunter Biden’s art dealer, Georges Bergès, begs to differ. He announced to the New York Times in October that Hunter’s artwork is a testament to the “American story.”

To that end, Bergès has reportedly managed to sell multiple paintings by his untrained client for a total of $375,000.