Former Rep. Lou Barletta (R-PA) believes Democrat leaders in Pennsylvania have contributed to Philadelphia’s record-breaking wave of murders by failing to prioritize law and order, he said during an interview on SiriusXM’s Breitbart News Saturday.

“When you put all this liberalism in one basket, this is what we get — not only a record number of murders in Philadelphia, but a record number of overdoses,” Barletta said. “It’s just unbelievable. People are afraid to go out of their homes. And that’s what you get when you talk about defunding the police and some of these policies that are destroying our great cities in America.”

2021 will go down as the deadliest year in recent history in Philadelphia in terms of homicides. The Philadelphia Police Department reported that as of December 9, the city had seen 524 homicides, up from 499 in 2020 and surpassing the record set in 1990 of 500.

“The numbers speak for themselves. I mean, people are alarmed. Businesses are alarmed,” Barletta said, adding that he visited Philadelphia this past week and spoke to a business owner there who said he was attacked once on his way home.

The Pennsylvania Republican highlighted what he perceived to be failures of Democrat leaders in his state that have given way to an increase in violent crime. 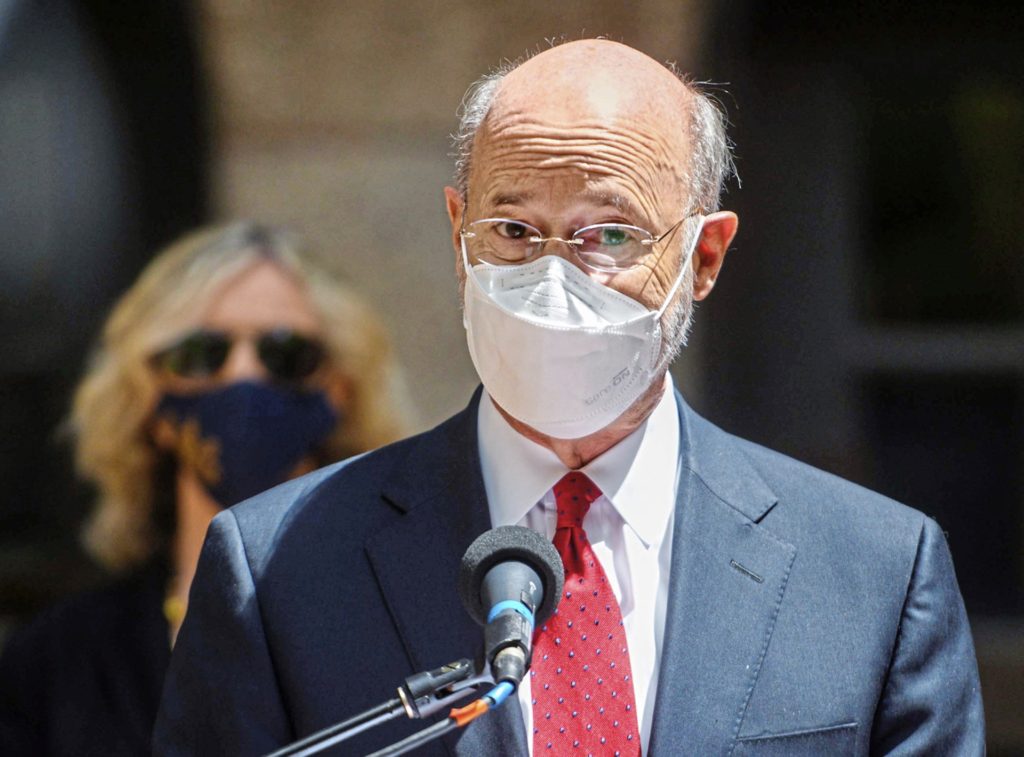 Gov. Tom Wolf encourages Pennsylvanians to vote “No” on disaster response ballot questions on the upcoming primary ballot during a news conference at the Allegheny County Courthouse on May 12, 2021, in Pittsburgh. (Steve Mellon/Pittsburgh Post-Gazette via AP)

Wolf last year marched with “BLM protesters who [were] holding up signs that said ‘blue lives murder,’” Barletta said. Wolf, a Democrat governor at the helm of a Republican-majority state legislature, also just vetoed a bill this month that would have made Pennsylvania the 22nd state to allow constitutional carry.

Another prominent Pennsylvanian, Shapiro, who is running for governor on the Democrats’ side, “would rather go after the Little Sisters of the Poor than go down into the Kensington part of Philadelphia, which is the largest open air drug market east of the Mississippi,” Barletta contended, making a reference to the litigation between Shapiro and the Trump administration over exempting the Little Sisters of the Poor and other employers from providing insurance-covered birth control.

As another example of law and order disregard, Barletta pointed to Philadelphia Mayor Kenney’s celebratory dance he did in 2018 when a court ruling further solidified the city’s immigration sanctuary status.

Needless to say, I think @janeslusser and @PhillyMayor are pretty excited about today’s ruling affirming Philadelphia as a Sanctuary City. pic.twitter.com/gdnnjZT9ps

Yesterday, I expressed my regret and acknowledged any pain my comments last week may have caused survivors, co-victims, and communities experiencing our city's gun violence crisis:https://t.co/J00j8ZvLD9

While Philadelphia has not moved to strip funding from its police department, Barletta said the “defund the police” sentiments of the far-left members of the Democrat Party, which sprang from Black Lives Matter protests and riots over police brutality last year, have nevertheless also contributed to the violent crime wave.

“This is exactly what happens when all this talk about defunding our police and the police are wrong,” Barletta said. “You know, the Democrat Party, this is not the party that we grew up with. This is now a party of lawlessness, and that ends here in Pennsylvania. Law and order is coming back in the 2022 election.”

Should he be elected governor, Barletta, who made headlines during his decade-long tenure as Hazleton mayor for his fight against illegal migration, said banning sanctuary jurisdictions would be a top priority as he seeks to control crime in the Keystone State.

“We’re not going to sit back, and you know, when you declare yourself a sanctuary city, if you’re a criminal alien, where the hell are you gonna go? … They’re going to go to those cities [where they] are being protected by their elected officials at the expense of the taxpayers, who feel helpless right now in Philadelphia.”