Parents and their children in Albemarle County, Virginia, have filed a lawsuit against the county’s school board over its efforts to “indoctrinate students with an ideology that teaches children to affirmatively discriminate based on race,” through critical race theory.

Represented by Alliance Defending Freedom, parents and their children in the county are targeting the Albemarle County School Board, Superintendent Matthew S. Haas, and Assistant Superintendent for School Community Empowerment Bernard Hairston.

“Defendants claim that they want to stand against racism,” the lawsuit states. “But rather than eliminate racism from the School District, Defendants have done the opposite.”

Ultimately, the plaintiffs say “the question is whether Defendants may use unconstitutional means to indoctrinate students with an ideology that teaches children to affirmatively discriminate based on race.” [Italics in original].

BREAKING: We just filed suit against Albemarle County Public Schools, challenging its CRT-inspired indoctrination program that teaches kids to view everything and everyone through the lens of race, fostering division.

As Breitbart News previously reported, the county adopted a “radical ‘anti-racism’ policy aimed at ‘building the racial consciousness’ by requiring children to deconstruct their racial and sexual identities and ‘understand that anti-racism is an action’ for which they have a ‘personal responsibility.'”

But discriminating on the basis of race is exactly what the parents argue is going on in their children’s schools.

Defining the “anti-racists” policy explicitly as “critical race theory” — in spite of the county’s repeated denials that they use critical race theory, even in the face of a plethora of evidence to the contrary — the parents argue:

Far from exploring ideas or philosophies surrounding justice and reconciliation, that ideology fosters racial division, racial stereotyping, and racial hostility. So does the [anti-racist] Policy.

The plaintiffs also point out the defendants’ fundamental re-definition of what “racism” means.

“Racism” is defined as “A system of advantage based on race. The subordination of people of color by white people,” according to the lawsuit. The parents argue:

This new understanding [of racism] classifies all individuals into a racial group and identifies them as either perpetually privileged oppressors or perpetually victimized members of the oppressed, denying agency to both. It assumes that racism terminally infects our social institutions, requiring their dismantling.

Pointing out that the policy does not recognize being “not racist” as a possible category, the lawsuit says the defendants “impute[] racism not only to those who consciously discriminate based on race, but also to those of a certain race (white) who do not actively participate in the prescribed dismantling.”

As Breitbart News previously reported, Albemarle County and other CRT adherents believe “anti-racism is an action” and a “personal responsibility.” CRT teaches that if:

…you are white or a part of so-called white ‘power structures,’ you are inherently racist and part of an oppressing class. By operating under this framework, CRT argues the only way to establish ‘justice’ is to completely revolutionize society by overthrowing the oppressor’s institutions.

If I identify forms of racism, and I do absolutely nothing about it, then I become a practitioner of racism. Now consider this controversial statement by some researchers, ‘You are either a racist or an anti-racist.’ It is time for you to think about how you will own this required antiracism training and the policy.

Critical race theory is not just embedded in the general policies of the school district, but also heavily in the curriculum.

As Breitbart News reported, the district started implementing a critical race theory-based curriculum through a pilot program at Joseph T. Henley Middle School called “Courageous Conversations about Race,” which has since reporting gone through several name-changes.

The lawsuit cites several slides, many of which drive the point that, “absent of making antiracist choices, we (un)consciously uphold aspects of white supremacy.” The lawsuit says:

Defendants also urged certain students to consider their privilege or lack of privilege, and to strive to be ‘anti-racists.’ Because ‘[i]n the absence of making antiracist choices, we (un)consciously uphold aspects of white supremacy, white-dominant culture, and unequal institutions and society.’ 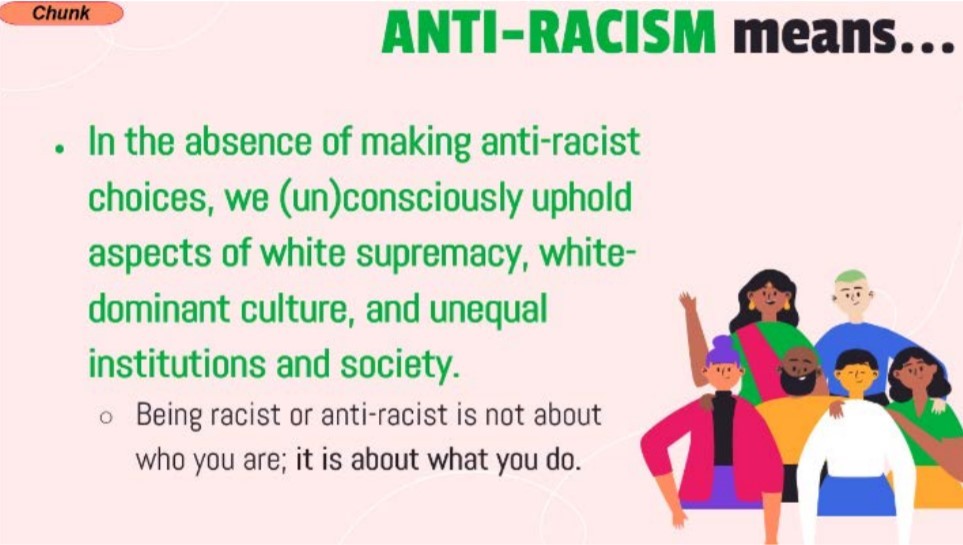 The pilot “redefined ‘racism'” as “[t]he marginalization and/or oppression of people of color based on a socially constructed racial hierarchy that privileges white people.” 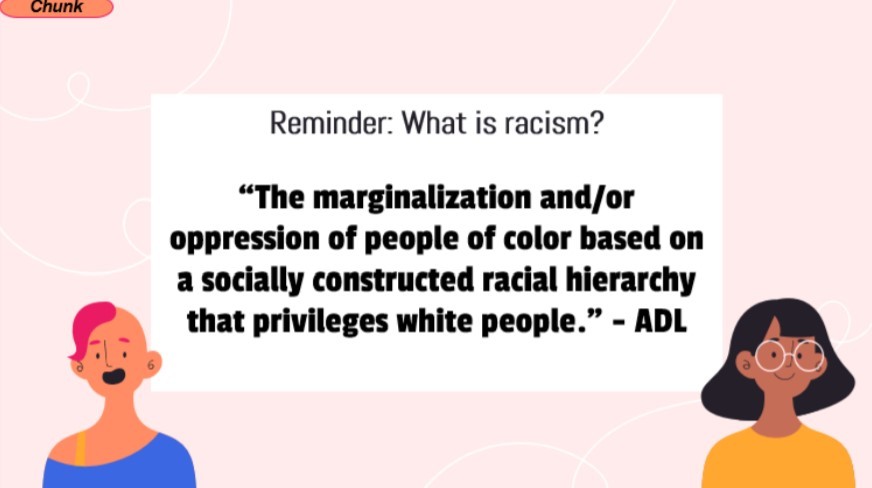 Albemarle County redefinition of race in curriculum. (Screenshot via Lawsuit).

The “pilot program teaches Albemarle Public School students that unless they fight against ‘white dominant culture,’ they are racists,” the lawsuit continues.

Pointing to another slide in the program, the lawsuit argues that “failure to engage in ‘anti-racist’ actions ‘uphold(s) aspects of white supremacy, white-dominant culture, and unequal institutions and society.'” 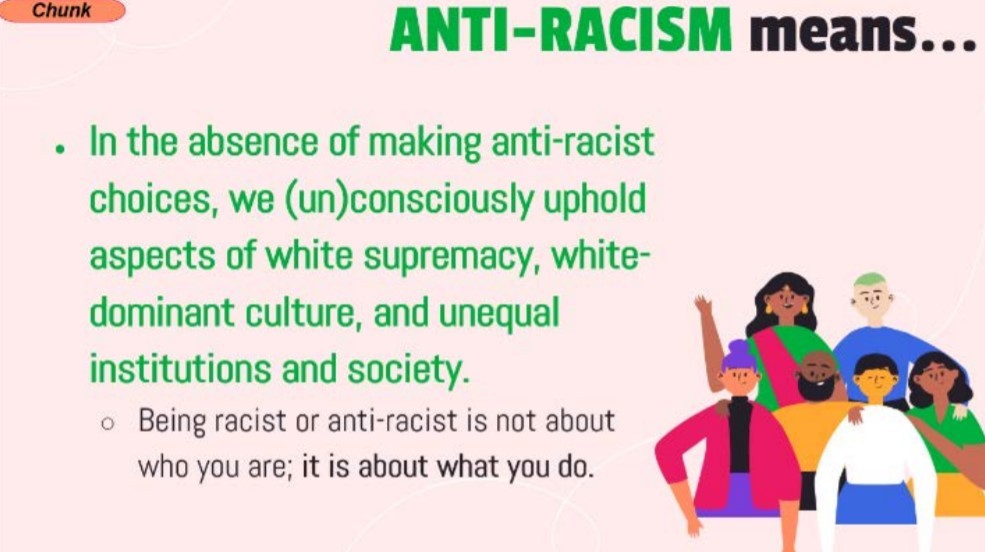 “It speaks of ‘white people’ as a monolith who gain or lose power by perpetuating a system based on racial discrimination,” the lawsuit says.

Hiring and training practices are also steeped in critical race theory. According to the lawsuit, the defendants “also conducted division-wide training for teachers where they focused on ‘white privilege.'”

“The training explained that white teachers must be pushed to consider ‘privilege systems, whiteness, [and] race,'” the plaintiffs wrote, “to realize that the ‘myth of meritocracy…isn’t true,’ to recognize ‘systemic white racism,’ and to move from color-blindness to racial consciousness.”

In addition, Hairston stated in the aforementioned video that “staff needed to think about whether they were on the ‘anti-racism school bus or if you need help finding your seat and keeping your seat or if it’s time for you to just get off the bus.'”

Quoting U.S. Supreme Court precedent, the lawsuit says “[g]overnment action dividing us by race is inherently suspect because such classifications promote ‘notions of racial inferiority and lead to a politics of racial hostility.’”

“One of the principal reasons race is treated as a forbidden classification,” the argument continues, “is that it demeans the dignity and worth of a person to be judged by ancestry instead of by his or her own merit and essential qualities.”

The plaintiffs also take on directly the use of deceptive language that is standard in the implementation of critical race theory, so as to try not to draw attention to the policy.

Defining “equity” as fundamentally different from “equality,” the lawsuit says “to focus on equity is to direct that different races must be treated differently, and unequally, just because of membership in a certain racial category. No other aspect of personhood is relevant.” [Italics in original].

“Anti-racism,” furthermore, “draws from the poisoned well of racism itself,” they continue.

As Breitbart News has reported, given the emergence of critical race theory as a major political issue, institutions that wish to implement it may surreptitiously refer to it by other means, or camouflage it behind phrases like “culturally responsive teaching” — which uses the same CRT acronym — “culturally competent,” “anti-racist,” and “equity.”

The defendants define an “anti-racist” as “someone who practices identifying, challenging, and changing the values, structures, and behaviors that perpetuate systemic racism” who must overcome their “bias and prejudice” and “help dismantle structures and practices that intentionally and/or unintentionally disadvantage historically marginalized people,” according to district-provided resource “Am I an Anti-Racist.”

However, the plaintiffs point out that there is only one type of privilege to overcome: “white privilege,” which is “[a]n unacknowledged system of favoritism and advantage granted to white people as the beneficiaries of historical conquest.”

In training slides, staff are encouraged to move from a “colorblind” view to a “color conscious” view of race. 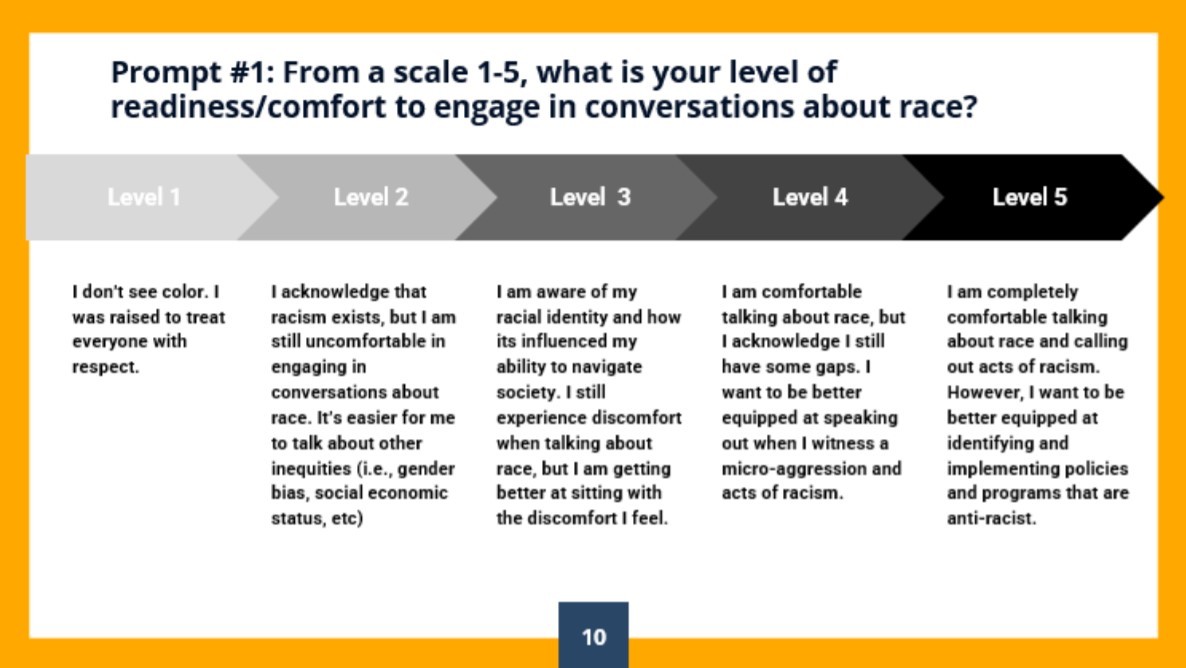 The training also included a chart titles “Communication is a Racialized Tool,” which “characterize[s] some communication methods—’verbal,’ ‘impersonal,’ ‘intellectual,’ ‘task oriented’—as exclusively ‘white talk,’ implying that people of color do not, and cannot be expected to, communicate in these ways,” according to the filing. 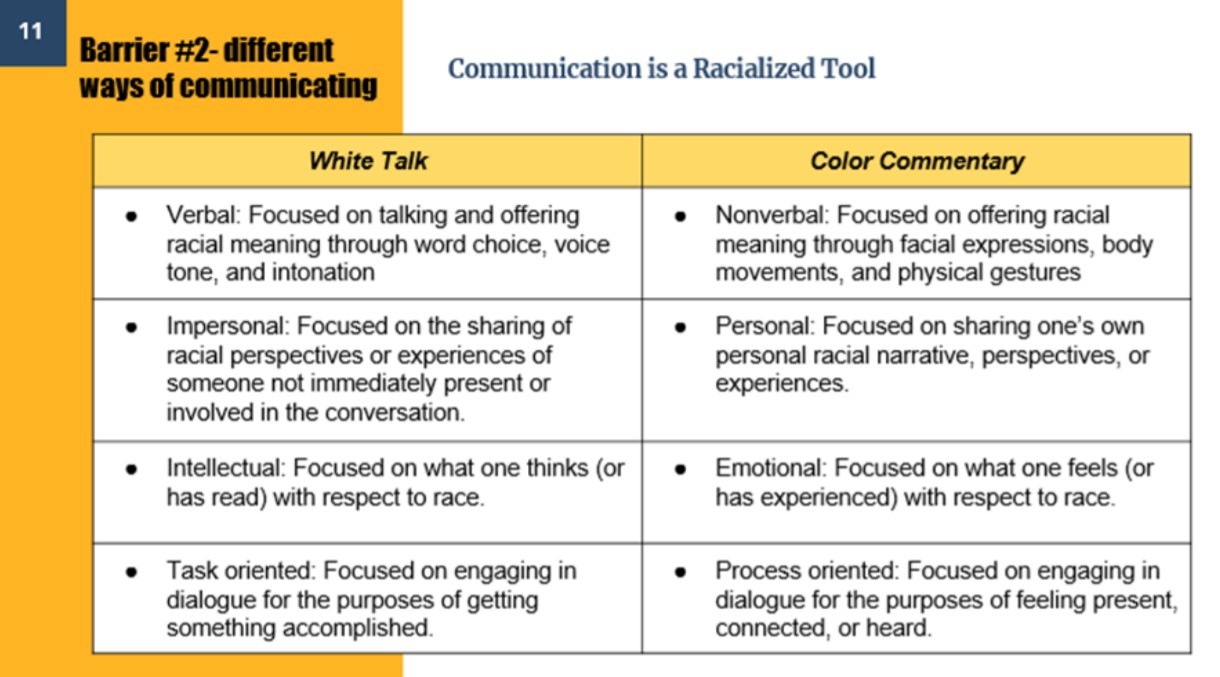 Albemarle County, “Communication is a Racialized Tool.” (Screenshot via Lawsuit).

Additionally, “they characterize other communication methods—’nonverbal,’ ‘personal,’ ’emotional,’ and ‘process oriented’—as ‘color commentary,’ implying that ‘white people’ do not, and cannot be expected to communicate in these ways.”

Furthering the argument, staff are taught that there is a “White way of thinking, which is White Consciousness,” and include a chart that lists “acts of ‘passive racism’ such as being ‘colorblind,’ ‘celebration of Columbus Day,’ and ‘over familiarization with POC [people of color]’ as direct support for ‘Hate Crimes’ and ‘Lynching,'” according to the lawsuit. 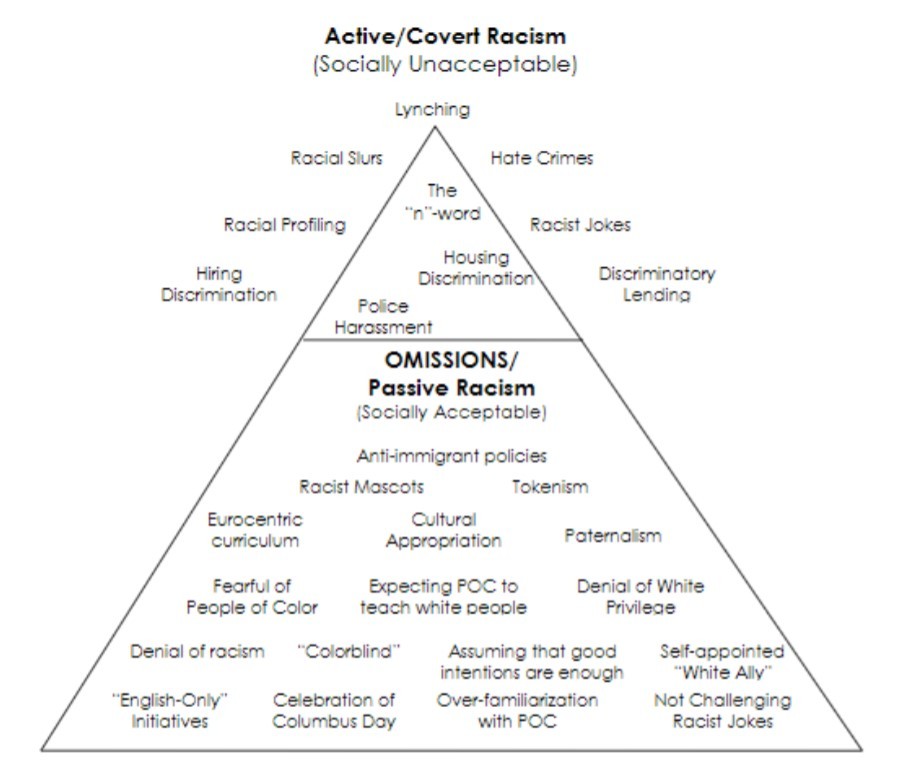 As Breitbart News reported, Diversity Teacher Chris Booz told parents the critical race theory ideology “is going to be woven through in all of the classes in Albemarle County.”

The defendants also argue that the policy both chills speech and unlawfully compels speech.

The disciplinary action appears to have extended to teachers as well. Breitbart News reported a Henley Middle School teacher having been fired for sharing the curriculum with parents.

Quoting Alexandr Solzhenitsyn’s The Gulag Archipelago, the defendants write, “[T]he line separating good and evil passes not through states, nor between classes, nor between political parties either—but right through every human heart— and through all human hearts.”

The case is C.I. v Albemarle County School Board, and has not yet been assigned a docket number in the Circuit Court for the County of Albemarle, Virginia.