An Oregon father who saluted President Joe Biden on a livestream with “Let’s go, Brandon” during the annual White House NORAD Santa-tracking phone call says it was offered as “a joke,” according to a report.

“Merry Christmas, and let’s go, Brandon!”Jared Schmeck said, referring to the popular conservative phrase to signal dissatisfaction with the president after Biden spoke with his kids on the phone last Friday.

“At the end of the day, I have nothing against Mr. Biden, but I am frustrated because I think he can be doing a better job,” the father of four and former cop told the Oregonian.

“Let’s go Brandon, I agree,” was the president’s cringemaking reply.

Schmeck posted video of his end of the call on YouTube, during which it appeared the connection was breaking up at the end of the exchange.

“I thought it would be automated. We just waited on hold and then they answered,” he told the Oregonian. “And I thought, ‘wow, this is real.’”

The dad smiled throughout the exchange, laughing when the president asked what he wanted for Christmas.

“Maybe a quiet night,” he said, chuckling as he sat in what appeared to be a child’s bedroom. 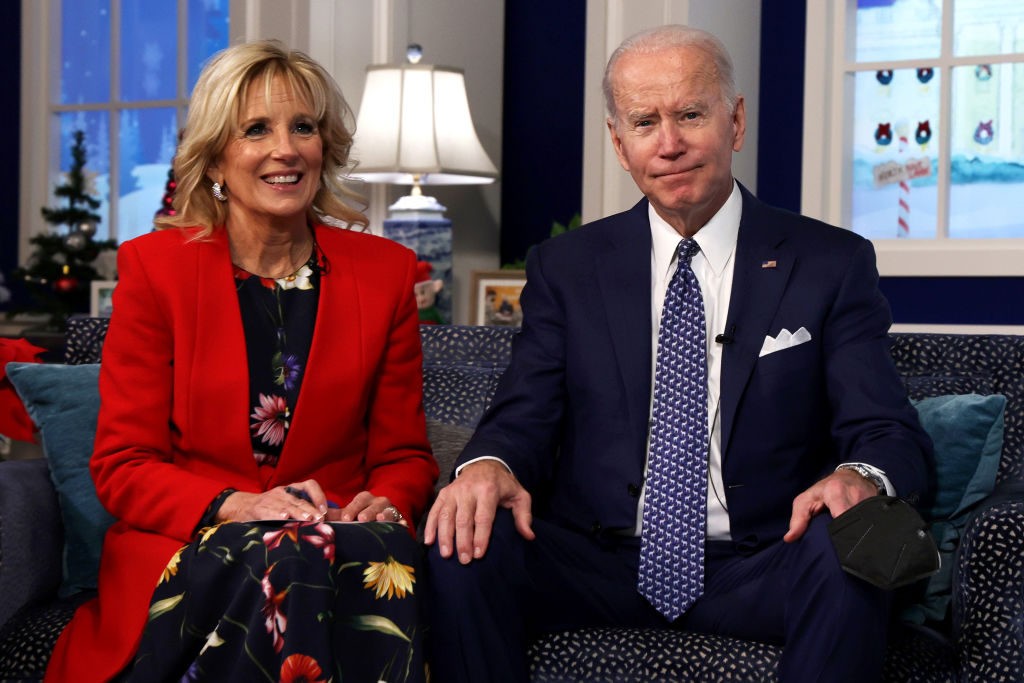 U.S. President Joe Biden and first lady Dr. Jill Biden participate in an event to call NORAD and track the path of Santa Claus on Christmas Eve in the South Court Auditorium of the Eisenhower Executive Building on December 24, 2021 in Washington, DC. (Alex Wong/Getty Images)

“I understand there is a vulgar meaning to ‘Let’s go Brandon,’ but I’m not that simple-minded, no matter how I feel about him,” Schmeck insisted to the newspaper. “He seems likes he’s a cordial guy. There’s no animosity or anything like that. It was merely just an innocent jest to also express my God-given right to express my frustrations in a joking manner … I love him just like I love any other brother or sister.”

Schmeck said he “stood 100% behind what I did and what I said,” adding he’s not a supporter of former President Donald Trump but is frustrated with Biden policies such as federal vaccine mandates, along with issues like inflation.

Despite saying his comment was just a jocular taunt, others are taking it more seriously.

Schmeck claims to be getting threats after the exchange, telling the Oregonian that he’s been receiving what reporter Maxine Bernstein identified as “vague but threatening phone calls.”
“[N]ow I am being attacked for utilizing my freedom of speech,” Schmeck said.

He’s not alone in his frustration; the “Let’s go, Brandon” salutation has taken off around the country.

The White House claimed in November that Biden did not focus on it.

On Friday’s call, Biden spoke with several couples and children during the traditional Santa tracking event with military families, a tradition for the presidents on Christmas Eve.

First Lady Jill Biden led the call, while the president chimed in on occasion.