New documents released in a federal lawsuit against the Fairfax County, Virginia, school board over admissions to an elite high school reveal school board members knowingly pursued an admissions policy discriminatory against Asian students.

Speaking about admissions at Thomas Jefferson High School for Science and Technology (TJ), the nation’s top public high school, board member Abrar Omeish texted her colleagues, “I mean there has been an anti asian [sic] feel underlying some of this, hate to say it lol,” to which another school board member Stella Pekarsky replied, “Of course it is. Which is why I always told people talking about TJ is a stupid waste of tome [sic]. It’s about making a political point.” 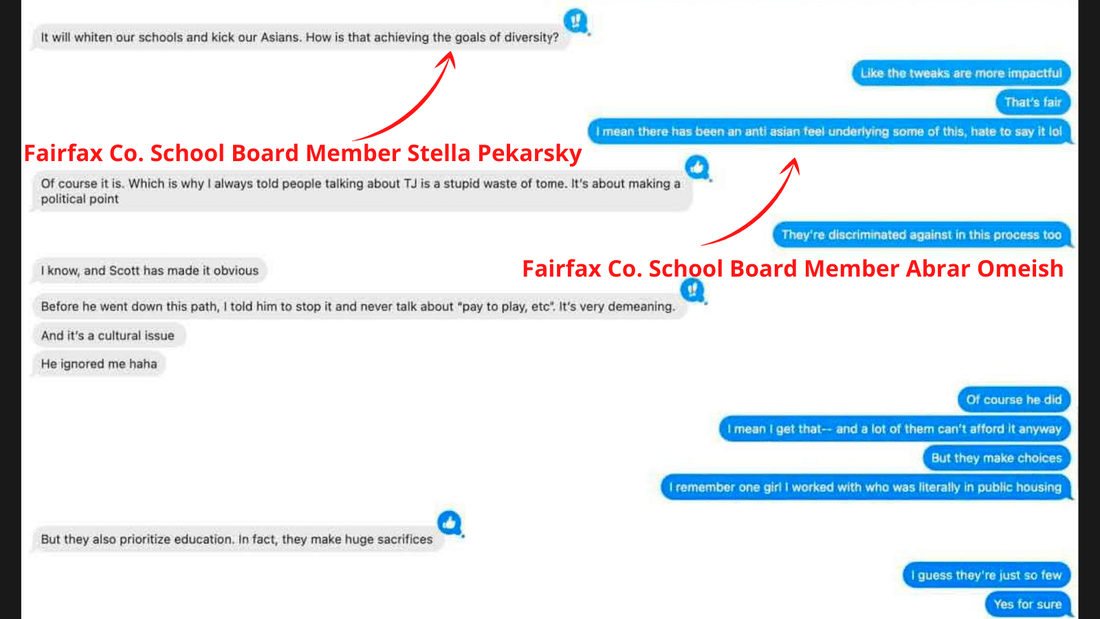 Even though it is a public school, TJ required an admissions exam for entry. In the past, the Science, Technology, Engineering, and Mathematics (STEM) based high school has had student demographics heavily dominated by Asian and Asian American students — about 70 percent. About 20 percent of students were white, and 10 percent black, Hispanic, or multiracial.

After former Superintendent Scott Brabrand eliminated the entrance exam and took other steps to reduce the Asian population of the school in order to “embed[] an equity focus throughout the division,” over 5,000 parents, students, teachers, and staff created the group Coalition for TJ and sued the school for discrimination. Coalition for TJ is represented by the Pacific Legal Foundation.

As education advocacy organization Parents Defending Education PDE detailed, “The new admission process was a move away from a race-blind, objective evaluation to a subjective race-based evaluation that removed nationally-normed academic merit testing.”

In fact, communications also revealed how officials “rigged the numbers so they could get the race-based results that they wanted with ‘bonus points'” on the scoring rubric, as PDE Vice President for Strategy and Investigations Asra Nomani put it, with Brabrand asking, “Can we go back and look at points – would 200 points be a game changer.”

The new documents reveal what appears to be a concerted effort by school board members to reduce the Asian population at the school.

In the aforementioned conversation between school board members, Pekarsky texted Omeish that the new admissions proposal “will whiten our schools and kick our [sic] Asians.” 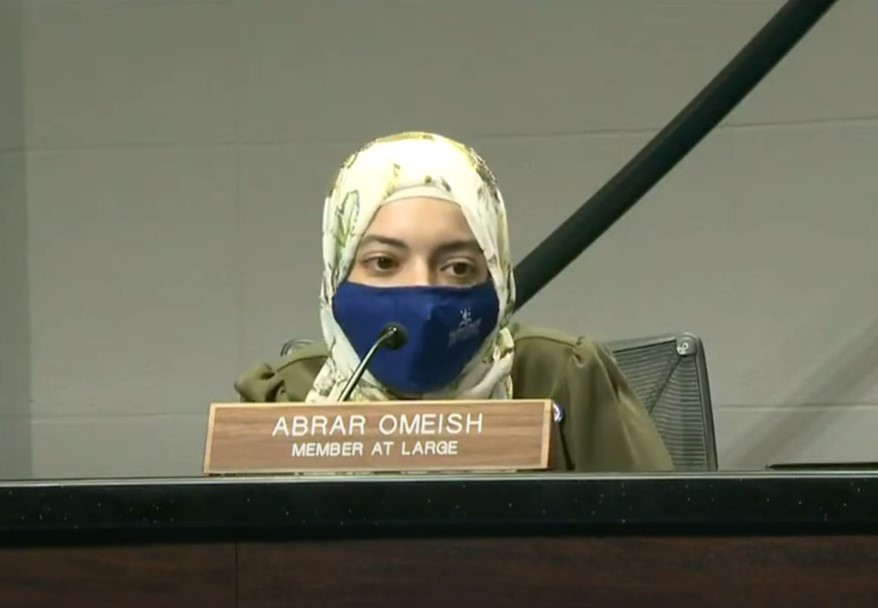 Conversation among district personnel show officials were likely aware of the repercussions of the proposed changes. Official Sloan Presidio said “we have enough black and Hispanic students … to fill an entire TJ class,” while another described Brabrand as “trying to be responsive to the times – BLM [Black Lives Matter] and a super progressive board.”

But Pekarsky appeared to have an issue with Brabrand’s policy changes, telling Omeish that Brabrand “screwed up TJ and the Asians hate us.” [Emphasis added].

Omeish replied that Brabrand was “just dumb and too white.” [Emphasis added]. 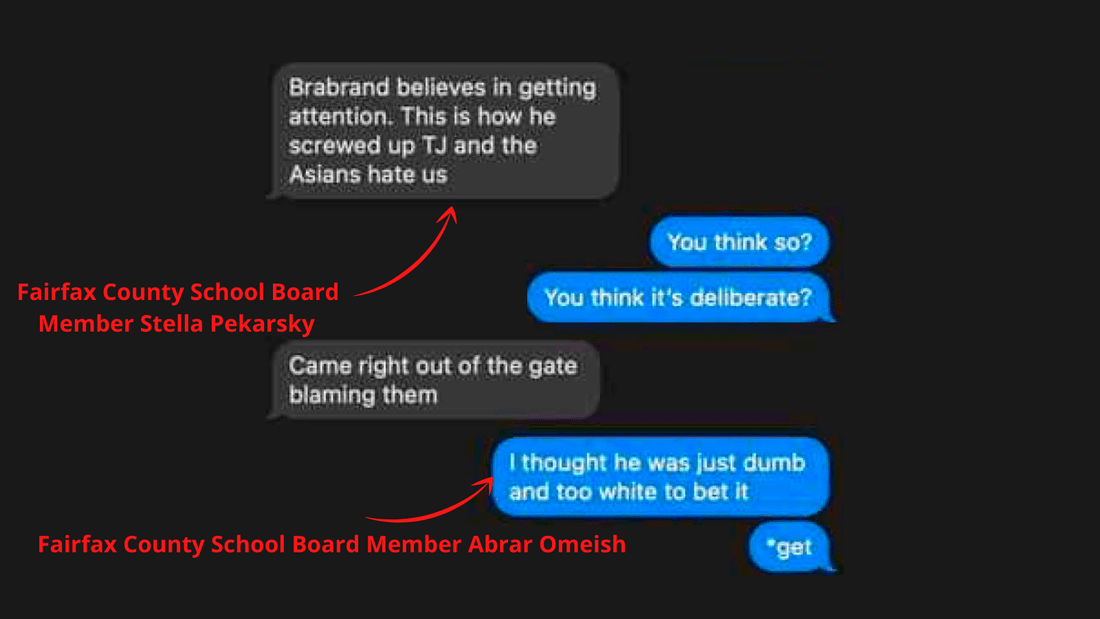 “The back and forth by the board members is damning, insulting and indicting of political corruption and self-admitted racism and incompetence,” Nomani wrote. “It’s a window into what so parents around the country endure from corrupt school board members who make a mockery of our precious democracy.”

Local parents call the new documents the “TJ Papers,” akin to the “Pentagon Papers” that revealed governmental misconduct during the Vietnam War. As PDE said in their report of the revelations, “Racial balancing and the ‘right type’ of diversity were at the center of the overhaul.”

“‘LOL.’ It’s the disrespect now being heard around the nation, with parents sharing this text by school board member Abrar Omeish in group chats, Facebook pages and emails,” Nomani told Breitbart News. “We wouldn’t know anything about the racism promoted in the name of ‘equity’ if it weren’t for the emails and texts uncovered by the mostly Asian parents who have dared to stand up to the Fairfax County school board, with the incredible representation of the lawyers at Pacific Legal Foundation.”

“This demeaning, rude ‘LOL’ text  and all the other revelations in the treasure trove of emails and texts is now flying across Fairfax County, the state of Virginia and the country like wildfire,” Nomani continued, “because they capture the mockery that school board officials everywhere have made of parents, students and education.”

But the move to racialize admissions at TJ was not solely of the school board’s doing. Indeed, a “statutory mandate” required an the equity push as well. When the TJ class of 2024 was announced in 2020, Virginia state Sen. Scott Surovell (D) informed then-board chair Karen Corbett Sanders that a report on the school’s new “diversity goals” was expected October 1, 2020.

Surovell has been working on the racialization, it seems, for several years. In 2018, the senator brought a former Fairfax County teacher as a witness, who testified about the  “‘ravenous’ parents from India, who ‘come here however they come here,’ to ‘only’ have their children attend TJ.”

“Our country owes a huge debt of gratitude to the mostly immigrant parents in Coalition for TJ who overcame their fears to stand up to political corruption with incredible moral courage,” Nomani told Breitbart News, “to protect the American Dream.”

Furthermore, an email from Omeish reveals clear motivation behind hers and others’ actions when she differentiates “equity” from “equality” and advocates for the former. “To be clear,” she wrote, “I plan to support the proposal towards greater equity, to be clearly distinguished from equality.” [Emphasis added].

Our @fcpsnews students are leading the way on equity statewide!

Incredibly proud of @WTWoodsonHS @Cavcongress who were invited to present on their work at @RichmondMERC this year.

High school students: take a look at this model and see how you can implement it at your school! https://t.co/9kW5ny5DVy

Given the emergence of critical race theory as a major political issue, institutions that wish to implement it may surreptitiously refer to it by other means, or camouflage it behind phrases like “culturally responsive teaching” — which uses the same CRT acronym — “culturally competent,” “anti-racist,” and “equity.”

“Racism is no laughing matter,” Nomani concluded to Breitbart News. “Every school board member in Fairfax County, Virginia, must resign immediately for their complicity in the mockery they made of democracy, railroading the community, gaslighting parents and destroying America’s No. 1 high school.”

The case is Coalition for TJ v. Fairfax County School Board, No. 1:21-cv-00296-CMH-JFA, in the U.S. District Court for the Eastern District of Virginia. Judge Claude Hilton will hear the case January 18 at 10 a.m.