Far-left Canadian Prime Minister Justin Trudeau told reporters on Thursday he did not believe deploying the Canadian military against a mostly peaceful anti-coronavirus mandate protest in Ottawa was “in the cards.”

Trudeau’s rejection of turning the nation’s military on a civilian exercise that has resulted in no significant violent or property damage followed remarks from Ottawa Police Chief Peter Sloly in which he said there may be no “policing solution” to ending the protests, suggesting a military solution was an option. Sloly had previously stated on Monday that police had no evidence of violence or major disruptions at the congregation of thousands in the capital city, which is calling for an end to vaccine passports, sanitary mask mandates, and all civil rights violations in the name of containing the Chinese coronavirus pandemic.

Trudeau made the remarks during a “virtual” press conference from an undisclosed location where he has been in hiding since announcing that he tested positive for Chinese coronavirus.

“One has to be very, very cautious before deploying military in situations engaging Canadians. It is not something that anyone should enter in lightly,” Trudeau said, according to the Globe and Mail. “But as of now, there have been no requests and that is not in the cards right now.”

Trudeau has severely condemned the protesters in the past, accusing them without evidence of being racists and misogynists for opposing lockdowns and mandates.

“The concerns expressed by a few people gathered in Ottawa, right now, are not new, not surprising, are heard,” Trudeau said during remarks from the undisclosed location on Monday, “but are a continuation of what we’ve unfortunately seen in disinformation and misinformation, online conspiracy theorists, about microchips, about God knows what else that go with tinfoil hats.”

Trudeau’s resistance to using the military to dislodge the protesters appears to be an attempt to diminish concerns prompted by Sloly during a briefing on Wednesday. As Ottawa police chief, Sloly is in charge of maintaining order and public safety on the streets.

“This is a national issue, not an Ottawa issue. I am increasingly concerned there is no policing solution to this,” Sloly said. He estimated that it would take about 50,000 officers to seal the city to prevent people from out of town from joining the protesters; Ottawa has less than 1,500.

Sloly conceded that a military response to a peaceful protest may “mitigate some risk, but escalate” the situation.

Prior to those remarks, on Monday, Sloly said that “all options are on the table” for ending the protests, even while conceding that they were not violent. 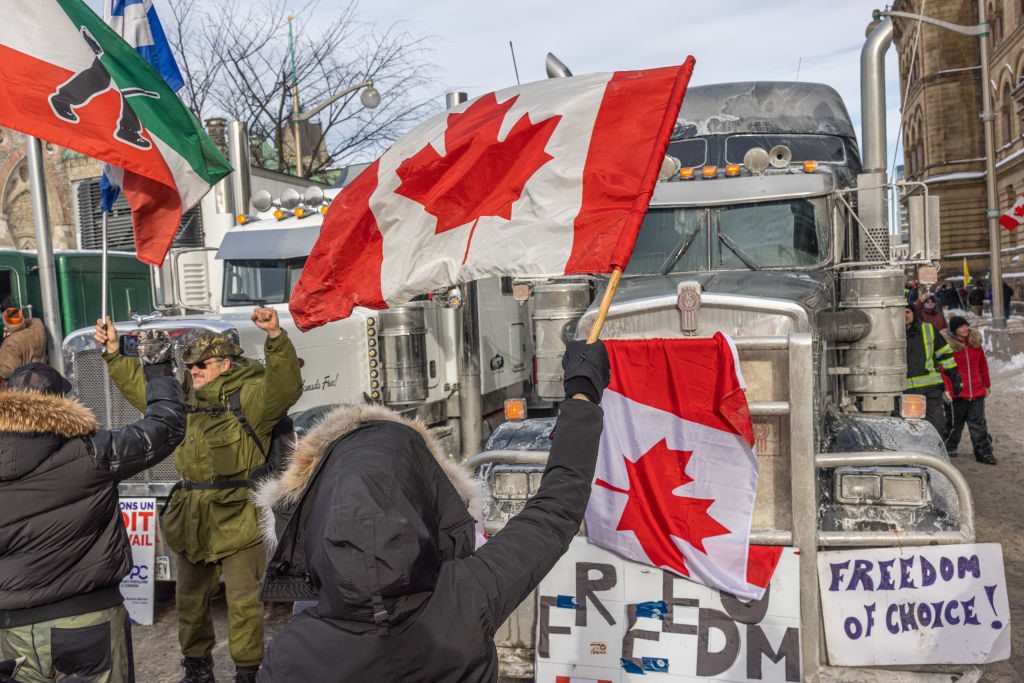 A woman waves a flag and cheers on truckers in protest of COVID-19 vaccine mandates on January 30, 2022 in Ottawa, Canada. (Alex Kent/Getty Images)

At the same press event, the mayor of Ottawa, Jim Watson, promised that his government was “doing everything possible to bring this to an end peacefully.”

The protests are referred to as the “Freedom Convoy” because they have been led nationwide by convoys of truckers, who have been among the most vocal in opposing vaccine mandates to travel across Canadian provinces given the nature of their world. The convoy amassed the support of thousands of vehicles nationwide and drove into the capital last weekend, using car horns to honk loudly in protest in front of government buildings and demand an end to all restrictions.

While Sloly had described “negotiation” as one of the many options on the table, Trudeau dismissed this on Thursday, insisting he would not lift any federal civil rights limitations related to the pandemic. Trudeau implied that the opponents of the mandates were seeking to overthrow a democratically elected government, without citing any remarks by any protesters or protest organizers that would support this claim.

Canadian Prime Minister Justin Trudeau and his family have reportedly fled their home in Ottawa for “a secret location,” as thousands of truckers traveling in a “freedom convoy” to protest vaccine mandates made their way to its capital city. https://t.co/ZMKF6EEw8z

“So having a group of people who disagree with the outcome of an election, who want to go a different way and bring in an alternative government is a non-starter in a responsible democracy,” Trudeau said, according to the Globe and Mail.

Authorities are preparing for an expected influx of protesters this weekend as the protests gain popularity. Reports indicate hotels in the city are full and police intelligence is planning for much larger populations to join the crowds.

Popularity for the protests has grown due to mounting signs that they are succeeding.

While Trudeau has rejected negotiating with the protesters on policy in any way, the governments of various provinces have begun discussing an end to vaccine passports and mandates.

Quebec announced on Monday that it would no longer implement a planned tax on people who had not received the government’s allotted doses of a Chinese coronavirus vaccine product that would have likely faced legal challenges.

Officials in Alberta, Saskatchewan, Manitoba, and British Columbia have also openly begun discussing lifting civil rights restrictions by the end of February, policy changes they had not expressed openness to before the protests.