Regional governments in Canada have begun announcing plans to drop onerous civil rights restrictions on their citizens meant to contain the Chinese coronavirus this week following mounting pressure from national protests, most prominently the “Freedom Convoy” in Ottawa.

The “Freedom Convoy,” initially led by truckers but now a movement of thousands of people, arrived in the national capital this weekend demanding an end to lockdowns, business restrictions, mask mandates, vaccine mandates, and other restrictions in effect as a result of the pandemic. Protesters have vowed to remain in the capital until the government of far-left Prime Minister Justin Trudeau lifts all such restrictions. Trudeau is currently in an undisclosed location recovering from an alleged coronavirus infection but has issued remarks from that location dismissing the protesters as racist, violent “tinfoil hat” wearers.

Local police disagree. While Ottawa Police Chief Peter Sloly warned this week that “all options are on the table” to end the protests, he admitted that authorities had not documented any incidents of violence.

On Monday, Quebec Premier François Legault was the first to announce changes to coronavirus policies since a weekend of widespread peaceful protests in the capital. Legault walked back a plan to implement an extra tax on individuals who have not received doses of a Chinese coronavirus vaccination product. The initial plan was to tax unvaccinated people at higher rates on the grounds that they would allegedly be a burden to the government healthcare system because they would contract more severe cases of Chinese coronavirus. The tax would have forced its victims to pay up to $800 Canadian dollars, or about $630 USD. 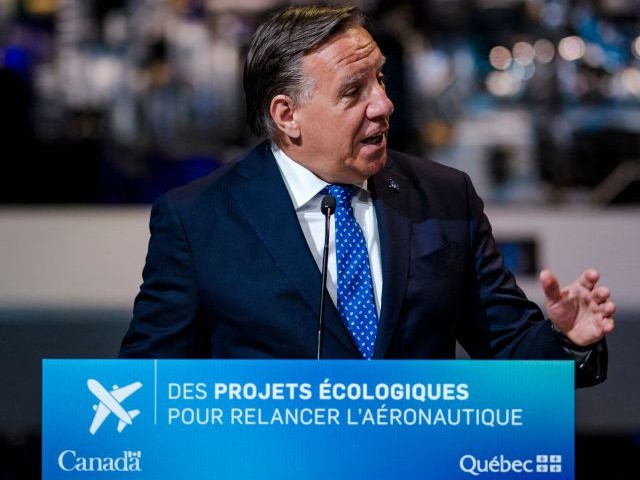 “I understand this divides Quebecers,” an apologetic Legault said on Tuesday. “It’s time to work together.”

Canada’s Global and Mail noted in its coverage of Quebec scrapping the plan that the tax would have “raised legal and logistical issues” that may have resulted in it never being implemented at all. The plan had prompted nationwide outrage, which Legault acknowledged in his remarks, stating that he hoped to “rebuild bridges” with those offended.

At least four other Canadian provinces have announced either an end to vaccine-related travel restrictions or at least a plan to come up with an exit strategy for the current status quo this week. Saskatchewan, one of the provinces with milder restrictions, announced that the “vaccine passport” program would not continue in place past February. Premier Scott Moe told reporters that he did not believe coronavirus vaccines were making any significant difference in containing the spread of the virus, noting that both he and Trudeau were fully vaccinated when they tested positive.

“It’s quite obvious that the virus itself has adapted through Omicron and transmits among vaccinated and unvaccinated individuals quite freely,” Moe asserted.

The premier also cited public dissatisfaction with the policies as a reason to get rid of them.

“People are asking their government for a return to normal, a removal of public health restrictions,” he said.

“At present, all Saskatchewan residents must show proof that they have received two shots of the COVID-19 [Chinese coronavirus] vaccine to enter restaurants, bars, and other businesses. They also have the option to provide a negative COVID-19 test,” the CBC noted.

Alberta, home to one of the largest anti-mandate protests in the country, issued a similar announcement, but its premier promised only the partial removal of restrictions.

“Once we begin to see a sustained reduction in COVID pressure on the hospitals, I am looking forward to being able to make decisions about moving toward relaxation of public health measures at that time,” Premier Jason Kenney said on Tuesday. “I believe that will happen this month.”

“The restriction on unvaccinated truck drivers doesn’t make sense and it’s going to further force up food prices and create challenges for supplies, including food,” Kenney said, indicating that a recent visit to Washington was precisely meant to encourage the United States to drop such limitations on Canadians.

Truckers and allied protesters have blocked the border between Alberta and the United States in Coutts, a border municipality, and refused to leave. This protest is an extension of the “Freedom Convoy” in Ottawa. Reports indicate that local companies have refused to tow away the protesters, complicating law enforcement attempts to end the assembly.

The governments of British Columbia and Manitoba have also issued similar but more cautious remarks indicating optimism that restrictions on free movement were weeks away from ending.

A poll released on Monday by the Angus Reid Institute found that a plurality of Canadians agrees with the goal of the protests – to end the restrictions on individual rights in the name of public health. About 54 percent of respondents agreed with repealing all mandates, a 15-percent increase from the results of the same poll at the beginning of the month.