A pair of German climate protesters who blocked entry to a major Australian seaport have been arrested, had their visas canceled and on Thursday were being readied for immediate deportation after a court appearance.

They will be expelled by the conservative coalition government in Canberra “on good order grounds” and in the public’s interest.

The brothers, aged 21 and 23, were charged after allegedly suspending themselves from poles to block road and rail entry to coal shipping facilities.

Both stunts kept freight truck drivers at a standstill, while emergency services worked to remove the men, as local outlet Channel 7 News reports:

In making this decision, I carefully considered information provided to me by the Department of Home Affairs and the Australian Border Force.

Families going about their business, driving to school or work, do not deserve to be disrupted by the attention-seeking stunts of unlawful protesters. Australians expect guests in our country to comply with our laws.

Earlier Thursday the NSW state government announced it would strengthen penalties for activists causing disruption on bridges and roads.

If passed by parliament, the new offence will carry a maximum penalty of two years in prison or a $22,000 fine, or both.

Climate activist group Blockade Australia has claimed responsibility for the protests, live streaming footage of the demonstrations to social media, as they seek an end to all Australian exports of fossil fuels especially coal. 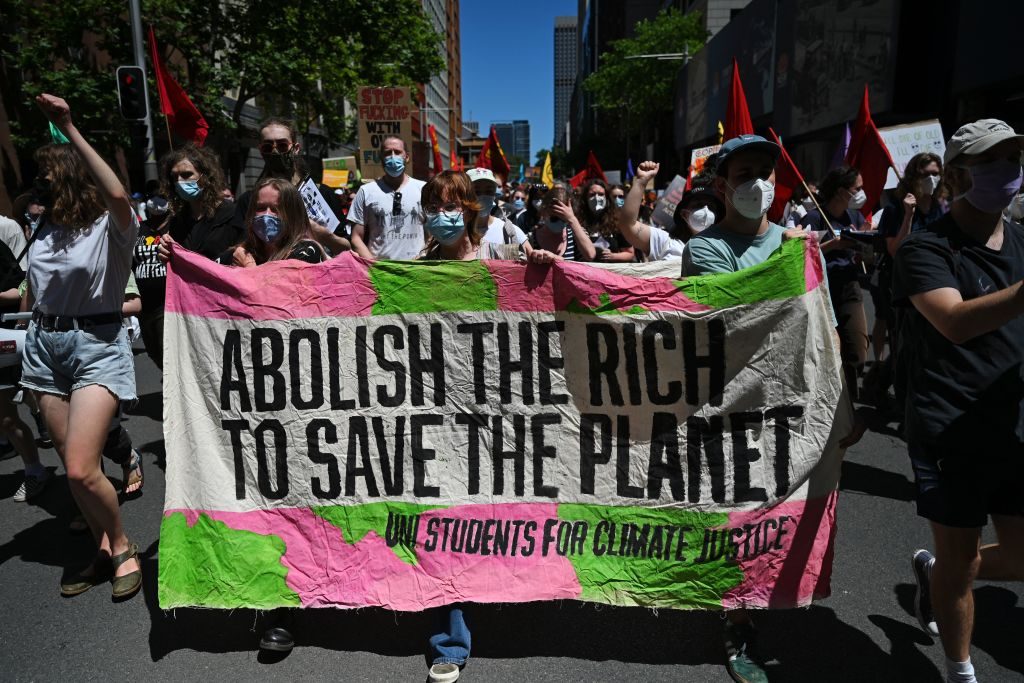 People participate in a rally during a global day of action on climate change in Sydney, Australia, on November 6, 2021, as world leaders attend the COP26 UN Climate Change Conference in Glasgow. (STEVEN SAPHORE/AFP via)

The deportation of the climate protesters comes just 48 hours after Australia reaffirmed its intention to continue exporting coal to markets around the world, as Breitbart News reported.

An estimated 300,000 Australians’ jobs rely on the coal sector. The Minerals Council of Australia itself says the coal industry directly employs 50,000 workers while supporting another 120,000 jobs.