The Trump endorsement is “now the most sought-after thing in politics” because Americans see the clear contrast between America under former President Donald Trump’s leadership and President Joe Biden’s, Lynne Patton, a senior adviser to Trump and his Save America PAC, told Breitbart News Saturday.

Patton spoke to Breitbart News Saturday ahead of Trump’s big rally in Selma, North Carolina, in support of Rep. Ted Budd (R-NC), who is leading in the GOP Senate primary. Patton, a longtime Trump family aide, made it clear Trump “remains the undefeated leader” of the GOP and Trump’s endorsement gives Budd a significant advantage, as polls indicate he holds a double digit lead in a race that both parties consider “critical” to having a majority in the Senate.

After Trump’s endorsement, Budd experienced a “huge reversal” in his numbers, Patton said, citing a statistic showing that 59 percent of primary voters say Trump’s endorsement makes them more likely to back a candidate. She said it is “absolutely no surprise” that Trump’s endorsement is “now the most sought-after thing in politics.” She also referenced another poll showing Budd doing well against his presumptive Democrat nominee Cheri Beasley, former Chief Justice of North Carolina, by 50-43 among registered voters. So this rally, she said, serves as an “opportunity for Budd to address his constituents and future voters.”

“Voters and Americans across the country, including liberals themselves, are missing Trump now more than ever. You know, as we saw in Virginia and Ohio and New Jersey and Texas, American voters are unapologetically America First and family first,” she said, noting that they are seeing what is happening to this country, which she deemed “just a colossal embarrassment.” Patton used rampant inflation, which costs each American over $433 more per month, and rising crime, as well as surging illegal immigration, as a few examples.

“And because of this you know, the GOP is at its best midterm election position in over 40 years,” Patton, the former Housing and Urban Development administrator for New York and New Jersey, explained.

“It’s no wonder that, you know, the Trump endorsement is alive and well because parents just want to be able to put food on their table, cheap gas in their car, and not have their kids be indoctrinated at school with gender identity and CRT,” she said, noting that Trump’s approach boils down to “common sense.” 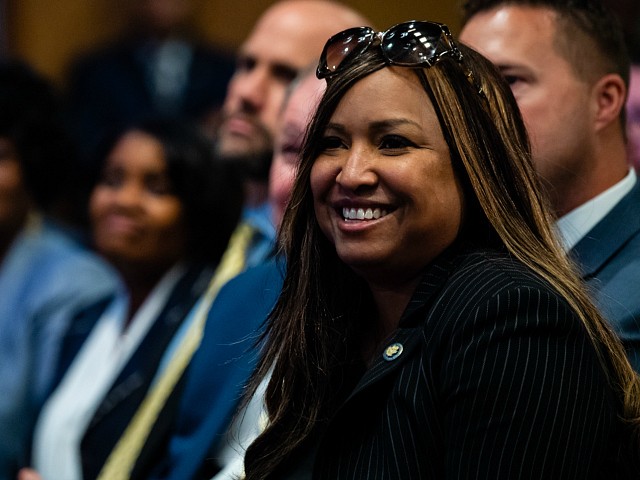 Trump promoted “common sense policies” such as school choice, a strong economy, and cheap energy, she said — things that “always stand the test of time” and voters “realize that.”

“Democrats don’t have an agenda that delivers results,” she said, adding that recent polls show most Americans think the country is more divided now.

Americans would rather have “mean tweets and food on their shelves” than what they are seeing now with “bare shelves” and things costing “twice as much,” she said.

“Democrats just don’t have a message and Americans know it. And Donald Trump obviously, his message has always been clear and that’s America First,” she added.

Patton, the “highest ranking black female in the Trump administration during his last year in office,” also spoke about the inroads the GOP has made with minorities, thanks to Trump.

“Because of Trump’s policies that directly benefited minorities under his presidency, you know, nonwhite voters turned out to reelect President Trump in numbers not seen by any presidential incumbent or candidate since Ronald Reagan,” she said, noting that roughly 1 million Americans lifted themselves out of poverty under Trump’s presidency, primarily due to his Tax Cuts and Jobs Act.

“Unfortunately,” she said, over 25 percent of black Americans and over 33 percent of Hispanics regret voting for Biden.

“At our core, our cultures are extremely conservative,” she explained, citing traditional family values and beliefs in Jesus Christ and personal accountability.

“These are things the Republican Party has subscribed to for years,” she said, explaining that Trump gave more money to historically black colleges and universities than any other president in history.

“I think really what black Americans recognize, and Hispanics too, is that Trump puts them first instead of illegal aliens,” she said, noting those are the two groups most likely to benefit from immigration enforcement.

Patton also briefly named a few things the media ignored that Trump accomplished during his administration.

“Trump made America energy independent for the first time in history,” she said, adding that Trump was able to reduce carbon emissions after leaving the Paris Climate Accord without spending trillions of dollars. For further perspective, Patton noted that oil was $36 a barrel under Trump, now it is $150. She also named Trump’s Tax Cuts and Jobs Act, which propelled unemployment to low numbers. She also said Americans cannot discount the fact that Trump made the strongest southern border in modern history by not only building a physical wall but instilling immigration policies that “forced immigrants that were trying to come here to stay in Mexico,” which Biden lifted.