Following a story on Breitbart News about vulnerable Rep. Susan Wild (D-PA), Washington Post reporter Marianna Sotomayor ran cover for her stance on abortion after a recent tirade where Wild claimed a ban on interracial marriage could be next if Roe v. Wade is overturned by “extremist politicians and judges.”

In the Post’s article on Wild, Sotomayor only mentioned that the congresswoman “made clear where she stood on abortion” and that she “strongly advocates for abortion rights” but did not indicate how radical Wild’s stance is regarding abortion.

Rather, in omitting the congresswoman’s true views on abortion — but couching them in language such as giving a “passionate speech at a courthouse rally” that was “reminiscent of 2018” when Democrats took the House — the Post‘s article reads much more like a public relations piece to clean up the extremist’s position on killing unborn Americans.

The congresswoman is a supporter of late-term abortions — up until the moment of birth — which is a key tenet of the bill for which she voted and of which she was an original co-sponsor, the Women’s Health Protection Act. The legislation, which passed the House and failed in the Senate, is an extreme federal takeover of abortion regulation.

The Women’s Health Protection Act, as summarized by the Catholic News Agency:

The act’s text lists a series of specific restrictions it would do away with, on everything from limitations on telemedicine to restrictions around viability, which the act defines as the point when a fetus can survive outside the womb — determined by “the good-faith medical judgment of the treating health care provider.”

However, despite her vote on the Women’s Health Protection Act, the Post — while diligently using language like “full-term fetus” instead of “babies” — called attacks on her “supporting legislation that would abort full-term fetuses” false accusations.

Fascinated by this profile of @RepSusanWild.

It says she has been "clear" on abortion, says attacks that she is for late-term abortion are "false accusations," but ignores her vote for a bill to allow abortion through 9 months of pregnancy.https://t.co/vmXdjdIb6s

While Wild has extreme views on abortions, the Post assures its readers that the Democrat “has spent months avoiding culture-war topics in her moderate district.”

Continuing along with the “moderate” narrative, the Post makes sure to point out that Wild “defines herself as pro-business Democrat, has carefully tried to explain how her party is attempting to confront these problems and reach voters who aren’t sure which political party to trust.”

On these issues, the Post says in flowery language, “Wild listened” and “made exuberantly clear that she is not a member of her party’s liberal wing.”

Despite that, writes the Post, Wild can be seen “speaking forcefully about abortion,” saying, “you better believe reproductive freedom is going to dominate serious attention in the coming weeks and months, because people’s lives and liberty are on the line.”

“There is nothing I take more seriously,” she said, while also claiming she is “not a single issue Congresswoman.”

Wild appears to be telling the truth, as she feels strongly enough about advocating for abortions that she supports taxpayer-funded access.

She was an original co-sponsor of the “Equal Access to Abortion Coverage in Health Insurance Act,” which would reverse the Hyde Amendment and allow anyone who receives health care or insurance from the federal government — such as Medicare, Medicaid, TRICARE, and Veterans Administration — to obtain coverage for abortions.

Additionally, Breitbart News’s original story laid out Wild’s claim that “far-right forces” are trying to violate the “will of the American people” since the intent by “extremist politicians and judges” is “not to stop with the issue of reproductive choice,” but rather to see a “dystopian view, vision of a society” take root across the country.

She then claims a plethora of other rights are under attack that have nothing to do with abortion or Roe.

“It’s clear that the intent is not to stop with the issue of reproductive choice. What’s next?” Wild questioned during her tirade, suggesting that women will be stripped of all personal agency if Roe is overturned. “Contraception? Deciding how many children to have, or whether to have children at all? Whether you can marry the person you love, regardless of gender or color? Whether women can get credit in their own names, or buy a house, or choose to even have a job?” 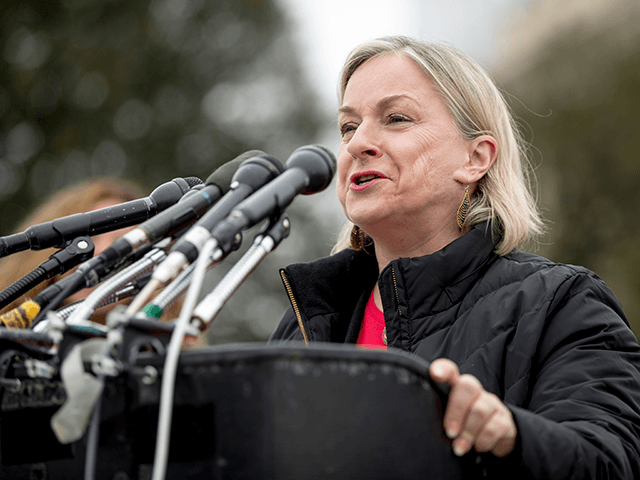 In an apparent attempt to rebrand Wild’s tirade, the Post reporter claimed that the Pennsylvania Democrat “bluntly ask[ed] constituents in her swing district to consider what other rights might be at risk” if Roe were overturned.

Cutting against the joint narrative of the Post and Wild, as Breitbart News reported, even if Dobbs v. Jackson Women’s Health Organization were to be decided as overturning Roe, abortion would not suddenly become illegal in the United States. Indeed, as Justice Samuel Alito wrote in the leaked draft opinion, “It is time to heed the Constitution and return the issue of abortion to the people’s elected representatives.”

In an attempt to dismiss federalism, Wild placed blame at the feet of former President Donald Trump, who she made a point of mentioning “lost the popular vote” — a common redirection among leftists who believe the Electoral College is illegitimate, despite the fact that its sole purpose is to counter a tyranny of the majority.

According to Wild, Trump’s three appointees to the Supreme Court “outright lied during their confirmation hearings,” claiming Roe was settled law.

The Post’s piece also claimed that Wild — who only narrowly won her congressional seat with just under 52 percent of the vote — has tried to avoid involving herself with the “culture-war debate” and wants to focus her campaign on different issues that her constituents care about and what Republican attack her on such as rising prices, the workforce, the supply chain.

Wild has spent months avoiding culture-war topics in her moderate district, but her passionate speech at a courthouse rally Tuesday night was reminiscent of 2018, when Trump’s presidency invigorated liberal activists, many of them women. That year, Democrats flipped dozens of seats long held by Republicans — including Wild’s district in eastern Pennsylvania that includes suburban Allentown and Bethlehem.

But as she rallied with sign-holding activists on Tuesday, Wild made clear where she stood on abortion — even if it might upset conservative voters in her district. Two years ago, Wild held a town hall in a rural part of the district and was confronted by attendees who falsely accused her and other Democrats of supporting legislation that would abort full-term fetuses.

But even in speaking forcefully about abortion, Wild says she plans to continue focusing on the issues that her constituents ask her about often and that her Republican opponents will continue to attack her on: rising prices, the workforce and the repercussions of supply chain logjams in a largely manufacturing and labor community.

Sotomayor did not respond to a request for comment from Breitbart News.

A spokeswoman from the National Republican Congressional Committee (NRCC) also took aim at the Post for ignoring Wild’s abortion stance and fawning over her.

“ICYMI since it wasn’t included in the piece, [Wild] voted yes on legislation to allow full-term fetuses to be aborted,” NRCC spokeswoman Samantha Bullock tweeted. “But while the MSM fawns over Wild’s abortion distraction tactics.”

ICYMI since it wasn't included in the piece, @wildforcongress voted yes on legislation to allow full-term fetuses to be aborted.

But while the MSM fawns over Wild's abortion distraction tactics, here's a reality check:https://t.co/ahBxmMfM73 https://t.co/TC6mswu3Kl pic.twitter.com/GyFSorHMnF