As Pride Month unfolds, a growing number of parades taking place across the country are banning police from participating.

Leftwing media outlets reported on the development, including Axios, which said police shootings of black Americans and the Stonewall riots in 1969 that launched a LGBT rights movement are driving the anti-police sentiment.

Axios reported on these efforts in San Francisco, Seattle, and Minnesota.

In San Francisco, Police Officers Pride Alliance said they would not march in this year’s parade because they were banned from wearing their uniforms.

Suzanne Ford, executive director of San Francisco Pride, said in the Axios article that police in uniform in the parade was “difficult” and that they could march in T-shirts if they wanted to march.

“Let us be clear,” the officers said in a statement. “This committee would not order the leather community to wear polyester at the parade.”

In Seattle, organizers of PrideFest said they asked police not to show up on festival grounds for the June 26 event. But Seattle Pride is allowing police to take place in the parade.

OutFront Minnesota will not take part in the Twin Cities Pride festival because police will be present, according to Axios. 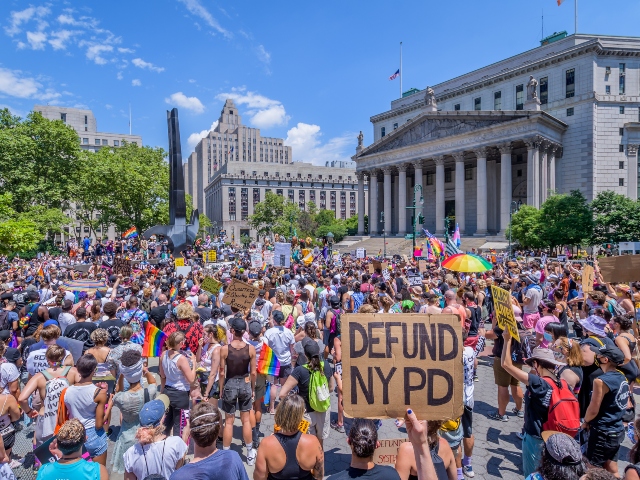 A participant holding a Defund NYPD sign over the crowd of thousands rallying at Foley Square. (Photo by Erik McGregor/LightRocket via Getty Images)

Taxpayer-funded National Public Radio (NPR) interviewed organizers of pride events in Philadelphia about the disbanding of Philly Pride Presents because of alleged “racism and transphobia” remarks from the group on social media.

A few weeks later, a separate post that described the Stonewall Riots referred to the trans women who led the resistance as “those dressed as women,” implying that trans women aren’t actually women.

“That really was the worst kind of insult you could pay,” said José de Marco, a longtime organizer with the HIV/AIDS coalition ACT UP Philadelphia. “People saw this and had absolutely enough of Pride and their B.S.”

To [Elicia] Gonzales, honoring police at Pride was offensive — since the annual parade started with the 1969 Stonewall Riots in New York City. That’s when a group of LGBTQ patrons at the Stonewall Inn finally pushed back against constant raids of gay bars and violence by the police. The protest is known as the catalyst for the annual Pride parades — and the modern LGBTQ rights movement as a whole.

“To be so brazen… to celebrate the police at your event was not even a dog whistle,” Gonzales said. “It was blatantly harmful.”