The survey showed Mace leading two weeks ahead of the June 14 primary. Mace clocks in with 46.4 percent support, while 40.5 percent back Arrington. However, 13.1 percent are undecided — a figure far greater than the gap between the two candidates.

Arrington, a Trump-backed candidate, has continued to draw a contrast between herself and the Republican incumbent, deeming Mace a “RINO in every sense of the word” and blasting her for blaming January 6 on the former president,

Nancy Mace has turned her back on this district,” Arrington during an appearance on Breitbart News Saturday last month.

“Since that time, Nancy [has done] nothing but cozy up to the Democrats and the radical left to, you know, promote her moderate, you know, liberal agenda. I mean, she literally is a RINO in every sense of the word, and this district has had enough,” Arrington said. 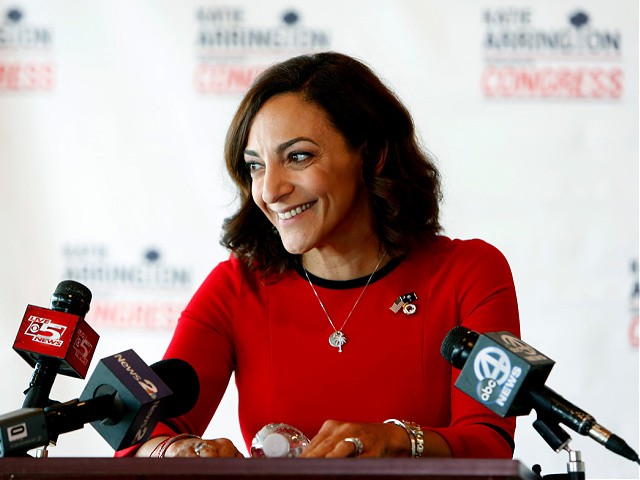 Katie Arrington during a press conference at the Staybridge Suites in Mt. Pleasant, South Carolina, on November 7, 2018. (AP Photo/Mic Smith)

“Her district,” she continued, wants an “America first agenda where you prioritize the things that are important to those people living in the low country,” including “inflation, national security at our border and abroad, our education system,” and becoming “energy independent again.” She also blasted Mace for touting an “optimistic” outlook after President Biden’s State of the Union address.

“I don’t understand where she’s coming from and what bizarro world she lives in. We have record high inflation, record high gas prices. It’s disgusting. The fact that our country has a baby formula shortage. We’re the greatest country on the planet, and yet the federal government under the Biden leadership has driven it to the point where babies are going hungry in our own country, and she thinks this is optimistic,” Arrington said.

“I cannot wait for June 14th so that we can send a message to people like Nancy Mace —  that turn on President Trump, that [turn] on the America First agenda —  that we don’t want you around anymore,” she added.

Former President Trump has also made his feelings toward Mace abundantly clear, describing her as “nasty, disloyal, and bad for the Republican Party.”

“Her opponent, Katie Arrington, is wonderful and will do a much better job for both South Carolina and the Republican Party. Katie Arrington has my Complete and Total Endorsement!” he said in March:

“Fox News is putting on the terrible Nancy Mace of South Carolina at every opportunity they get. Fox Board Member (too bad!) Paul Ryan is pushing her so hard it’s ridiculous. She’s nasty, disloyal, and bad for the Republican Party. Her… pic.twitter.com/HEwzYN9GRF