Jim Bognet, a Trump-endorsed Republican congressional candidate in Pennsylvania’s Eighth Congressional District, told Breitbart News Saturday’s host Matthew Boyle that the Supreme Court overturning Roe v. Wade was an “amazing day for our culture of life,” which is why it is important to elect conservative fighters to office.

Following the Supreme Court’s historic 5-4 opinion overturning Roe v. Wade after ruling on the Dobbs case, which determined the right to abortion is not included in the Constitution, Bognet said it was “an amazing day for life” and “for our culture of life.”

“It’s something that we’ve been working for and praying for,” Bognet added. “And now we’re on the first step of, first giant step on the way back to installing a culture that reveres and respects life and helps mothers and supports families. And it’s just, it’s just an amazing day for human liberty.”

Bognet, agreeing with Boyle that it would not have been possible to overturn without electing former President Donald Trump — ultimately defying all the Never Trumpers — said, “This is why it’s so important to have fighters in office to have not just conservatives but conservative fighters, people that are willing to throw down with the left and fight for what they believe.”

He explained that Trump stood up for Kavanaugh during the “dark days of 2018” when people were pushing the former president to “dump Kavanaugh and come up with some moderate to assuage the lunatic left, and he kept fighting.” Noting that “this is all connected,” Bognet added that “the politics of personal destruction and lies and innuendo were brought up in the fall of 2018 and brought to the fore like we’ve never seen before … And President Trump stood by and fought for Kavanaugh.”

“President Trump fought for [all of his conservative Justices],” Bognet added. “And that’s what I think is so important. And I think your audience instinctively knows we need conservative fighters that won’t back down that won’t be cowed because only if you’re willing to fight will we have the incredible victories that we have yesterday and throughout the Trump presidency.”

When talking about his opponent, Democrat incumbent Rep. Matt Cartwright, Bognet called him a “classic, out-of-touch faker” because he was elected by “pretending to be pro-life in 2012” and “went around telling people, ‘I’m a good Catholic, I’m pro-life.'” 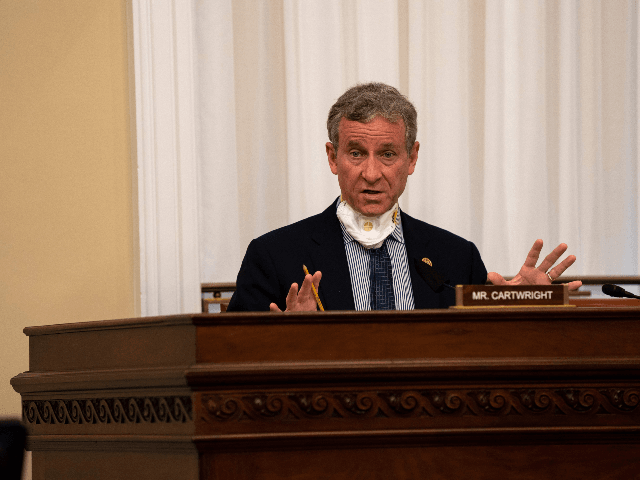 Rep. Matt Cartwright (D-PA) speaks at a hearing with the Subcommittee on Military Construction, Veterans Affairs, and Related Agencies on Capitol Hill in Washington DC, on May 28th, 2020. (Photo by ANNA MONEYMAKER/POOL/AFP via Getty Images)

However, Cartwright “joined the pro-choice caucus … And he only joined that last year. He has sold out to Biden and Pelosi and the left-wing money.”

Noting that Cartwright has voted with President Joe Biden 100 percent of the time and Speaker Nancy Pelosi (D-CA) 99 percent of the time, Bognet said, “Pelosi and Biden give him $5 million of left-wing money from pro-abortion on-demand people across the country, and he votes with them.”

“A vote for Matt Cartwright is a vote for Joe Biden’s liberal agenda,” he added. “Cartwright’s voted for abortion on demand. He voted against the Born Alive Protection Act, which says, if an abortion occurs and the baby survives, you have to give it health care. Think of the barbarity of that. It’s disgusting. It’s horrifying for anybody who reveres life.”