Welcome to Joe Biden’s 4th of July, the most expensive in history!

You get what you vote for, and you idiots voted for the highest gas and food prices in history.

His Fraudulency Joe Biden used the last 4th of July to gaslight Americans into believing inflation was no big deal, nothing more than a Republican talking point. Remember this nonsense with all the bad puns from the White House — this horseshit that ignored the fact that gas was already well over $3.00 a gallon (which now sounds like the good old days)…

Planning a cookout this year? Ketchup on the news. According to the Farm Bureau, the cost of a 4th of July BBQ is down from last year. It’s a fact you must-hear(d). Hot dog, the Biden economic plan is working. And that’s something we can all relish. pic.twitter.com/7h9qLauIbC

Well, welcome to Joe Biden’s Dystopian America on the 4th of July in the year 2022… Welcome to record-high prices for your Independence Day barbecue…

Ground beef prices are up 36% from a year ago, while chicken breasts gained by a third, according to a survey from the American Farm Bureau Federation. Overall, revelers can expect to spend 17% more on food for a barbecue, marking the biggest increase since the lobbying organization began tracking data a decade ago.

In 2021, the cost of an Independence Day cookout declined by less than 1%, according to the group. But much has changed since then. Costs for fuel, labor and key farming inputs like fertilizer have soared. Russia’s invasion of Ukraine has worsened the situation by disrupting global agriculture supply chains [LOL!], according to Roger Cryan, chief economist for the Farm Bureau.

Paying more for burgers and lemonade (up 22%) hits just as one measure of US consumer sentiment fell to an all-time low. How that will impact spending remains to be seen, but the shoppers did pull back in May, and there are more predictions of a looming recession. [emphasis added]

That’s just the cost of food. That doesn’t include record-high gas prices, the highest in history…

Grocery prices are shocking, demoralizing. Last week, I paid close to $8 for five bratwursts. You walk out of the store with a couple bags and $100 poorer. And it freaks you out, which is why we are headed into a recession.

I had all kinds of summer plans to do this and that. New carpeting, maybe. Remodel a bathroom. But these prices have a psychological effect. They make you want to hunker down and save, burrow in and wait it out. And once we stop spending, that’s when you hit a recession — and as I’ve been warning for more than a year now, we are headed for a recession.

You cannot explode gas prices like Biden has and not slow the economy. Energy *is* the economy. I’m no genius. I’m just someone who can’t be fooled and gaslit by talking points. I’m a very uncomplicated guy, and therefore I never lose track of the basics… Gas is $5.00 a gallon? Welcome to a recession. 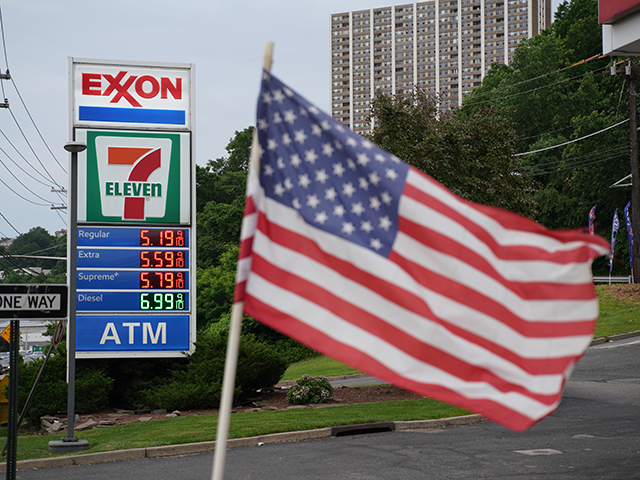 Gas prices over $5.00 a gallon are displayed at gas stations in New Jersey, USA, on June 7, 2022. (Photo by Lokman Vural Elibol/Anadolu Agency via Getty Images)

And because Biden refuses to do what’s necessary (and easy) to bring the cost of gas down (drill, baby, drill), this will be a long recession. Cheap energy brings down the cost of everything, from manufacturing to shipping to storage to the cost of retail outlets to keep the lights on. Biden begging the Saudis will not solve this problem. The Saudis hate us and love using this power to make our lives harder. America is abundant with natural resources, especially energy. All we need are leaders who care more about everyday Americans than the corrupt liars in the global warming (which is a hoax) movement.

Remember this… Human beings need food, energy, and shelter to survive. Those are the basics that not only sustain life but the make the difference in our quality of life. If we have a place to live, plenty to eat, and climate control (by way of energy), life is not only good; it is better than it ever was in the history of mankind.

Democrats like Joe Biden are aggressively and deliberately looking to undermine that. Under Democrats, energy and food prices explode, housing becomes scarce and super-expensive (see: California).

Because Democrats see human beings as a disease, like a virus killing their precious Mother Earth. They especially hate everyday Americans because they cannot control us (which is why Americans are awesome) — and this is why Democrats flood the country with illegal aliens hoping to replace us. They want all of America to be like Southern California.

There is no reason with 21st Century technology that a state like California should be suffering water, housing, and energy shortages. Nuclear power! Desalination plants! Reservoirs! Endless square miles of empty land to build homes on! Endless supply of lumber to build those homes! But they won’t, and that’s a choice, a deliberate choice.

Democrats want a country filled with cheap labor living in squalor while they enjoy life in air-conditioned high rises.

This is not a drill.