Democrat Rep. Vicente Gonzalez (D-TX), who previously held accounts with the Bank of China, has not yet filed his Financial Disclosure Statement, which every lawmaker is required to do under federal law by May 15, Breitbart News can reveal.

EDITOR’S NOTE 7/29/22 12:33 p.m. ET: After publication of this story, Gonzalez’s office pointed to an extension document filed on March 15, which allows the congressman until August 13 to file his Financial Disclosure Statement.  That extension document should have been publicly available on the Clerk of the U.S. House of Representatives website, but it was not due to a clerical error, according to Gonzalez’s office. Prior to publication of this report on Thursday, July 28, shortly before 1 p.m. ET, Breitbart News had made at least two inquiries to Gonzalez’s spokesman James Rivera at 9:11 a.m. and 11:51 a.m. ET.  Those inquiries were not responded to until after the article was published.  In an email sent at 2:28 p.m. ET,  Rivera provided the document which had just been uploaded to the Clerk’s website, even though it was filed back in March. Rivera later told Breitbart News that the issue at hand was an error by the Clerk. “Congressman Gonzalez filed all paperwork on time,” Rivera said in a follow-up email Friday morning. “Due to a clerical error on the part of the House of Representatives, the documentation did not show up.” As a result of these revelations, Breitbart News has updated this story to accurately reflect the situation.

According to the Clerk’s website, Gonzalez has not filed any Financial Disclosure Statements but after the publication of this article a 90-day extension that he filed in March allowing him to file the required document later this summer in mid-August was made available. That extension document did not appear before publication of this story due to an error on the park of the Clerk of the House of Representatives according to the congressman’s office.

If the congressman had not filed neglect to file the statement or an extension before the due date that would have made makes him over two months late and represented a violation of federal law. Since the congressman did file the extension document–even though an error from the Clerk made it not publicly available at the time of this story’s publication and for weeks leading up to it–he has until August 13 to file the proper paperwork.

Previously, there were “no results” on the Clerk of the House of Representatives website when searching for a Financial Disclosure Statement or extension for Gonzalez under the year 2021 or 2022. 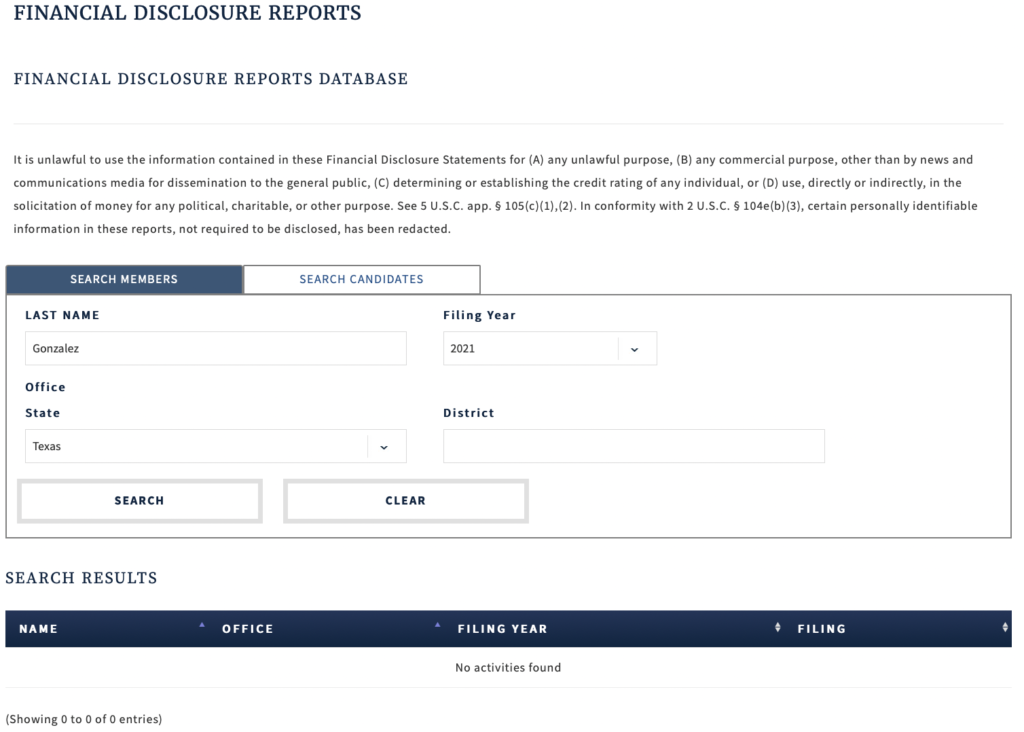 Under federal law — the Ethics in Government Act of 1978 (EIGA) — Members, officers, certain employees, and candidates are required to file Financial Disclosure Statements with the Clerk of the House of Representatives, which are due annually on May 15 for the previous year.

Kendra Arnold, the executive director of the Foundation for Accountability and Civic Trust — a federal ethics watchdog — said it’s “alarming” anytime members of Congress do not follow laws that ensure they are being transparent and not “acting in bad faith and profiting from their position.”

“The financial disclosure laws are of utmost importance and every disclosure must be filed promptly,” Arnold told Breitbart News, before expanding on the need for financial probity.

“The laws must be followed not only to reveal whether our elected officials are acting in bad faith and profiting from their position, but also to maintain the public trust in a fair and impartial government. Members take an oath to uphold the law; and its alarming anytime we see these laws not being followed.”

The delay in filing could be routine in nature, or it could mean something politically problematic for Gonzalez. This is not the first time Breitbart News has uncovered potentially politically damning information about Gonzalez’s finances.

It also revealed that he was getting interest from the bank totaling between $2,501 and $5,000 each year.

REVEALED: Democrat Rep. Vicente Gonzalez (D-TX) has on his three most recent financial disclosure forms filed with the clerk of the U.S. House of Representatives reported holdings worth more than $100,000 in the Bank of China. https://t.co/kNZ7o3BWW8

Nonetheless, not only did the money with the Bank of China raise questions, but the amount of interest the congressman was receiving at the time did as well. Gonzalez reportedly had between $250,001 and $500,000 in at least two other banks, in which he received no interest in one and collected only between $201 and $1,000 in interest in the other.

At the time, Gonzalez refused to do an interview with Breitbart News after multiple requests and his local news stations — which raised many questions about the congressman from his constituents.

However, after the reports of the congressman having money with the “state-owned commercial bank” of China, Gonzalez said he closed his accounts. News 4 San Antonio reported, “[Gonzalez’s] press secretary, Jason Johnson, told News 4 San Antonio that the Bank of China is insured and operating under U.S. laws.

Johnson also told the News 4 San Antonio, the congressman has closed that account.”

Presumably, if the account actually was closed, the financial disclosure statement in question that Gonzalez now has until Aug. 13 to file would show that to be the case.

Additionally, in June 2021, Breitbart News unearthed newspaper reports and court documents from the early 2000s showing Gonzalez allegedly made “demeaning statements” about the local police that reportedly started a brawl with a municipal court judge and the then-mayor of Donna, Texas. 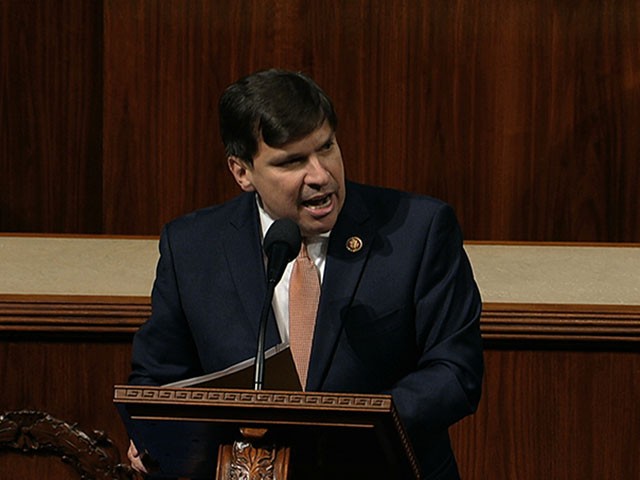 File/Rep. Vincente Gonzalez, D-Texas, speaks on the House floor as the House of Representatives debates the articles of impeachment against President Donald Trump at the Capitol in Washington, Wednesday, Dec. 18, 2019. (House Television via AP)

Despite the well-documented court filed and newspaper articles, Johnson from the congressman’s office told Breitbart News that “this is completely false” and would not specify further what he was referring to as “false.”

But, Gonzalez also voted in March to “defund the police.” The congressman voted to pass the George Floyd Justice in Policing Act of 2021 with House Democrats on an almost party-line vote of 220-212. Republicans described the act as a plan that would engage in “defunding the police.”

The Congressional Budget Office’s (CBO) nonpartisan analysis of the bill found it would hurt more than 18,000 police departments around the country. “More than 18,000 law enforcement agencies nationwide would be affected by the bill’s requirements,” the CBO said in a letter to top congressional Republicans on the matter.