Former President Barack Obama expanded the size and scope of the “deep state,” explained Wall Street Journal columnist Kimberley Strassel, drawing on research in her latest book Resistance (At All Costs): How Trump Haters Are Breaking America in a Monday interview on SiriusXM’s Breitbart News Tonight with hosts Rebecca Mansour and Joel Pollak.

Mansour read Strassel’s definition of members of the “deep state” apparatus in the aforementioned book: “Deep staters, to me, are defined as career civil servants who have growing amounts of power in our administrative state, but who work in the shadows. These federal employees are tasked with processing government policy and decisions and are supposed to do so with no judgment as to the political party in power.”

A 2016 analysis of federal bureaucrats’ political campaign contributions by the Hill found near universal support for Hillary Clinton:

Of the roughly $2 million that federal workers from 14 agencies spent on presidential politics by the end of September, about $1.9 million, or 95 percent, went to the Democratic nominee’s campaign, according to an analysis by The Hill.

“A lot of us out there who have covered government for a long time have always known that the federal bureaucracy in modern times, have leaned left, but something different has happened under Donald Trump, and I would argue that what you have is people actively joining that resistance.”

“They aren’t just disliking the president,” continued Strassel. “They’re taking actions to try to undermine the administration, and it’s a huge problem.” Such bureaucrats are opposing and obstructing work “they are paid to implement,” she added. 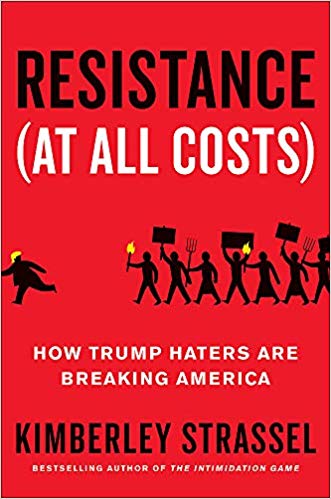 The “deep state” apparatus had been expanded and increasingly politicized in a partisan and activist sense during the Obama administration, Strassel stated.

“The Obama years were terrible for the federal bureaucracy in terms of their mission [to execute the president’s policies],” Strassel remarked. “Remember, Obama bragged about the fact that he couldn’t get Congress to pass the legislation he wanted them to pass, and so he said, ‘I’m going to do it, instead, by pen, pad, and phone,’ and he basically turned the federal bureaucracy into this new arm — which, by the way is not in our Constitution.”

Strassel went on, “We have a Congress that’s supposed to make laws, and an executive branch that’s supposed to execute those laws. But he said, ‘I can’t get the Congress to pass the laws, so I’m just going to emancipate you, the EPA or emancipate you the Department of Transportation to do what I want you to do, and so this bureaucracy did feel emancipated. They were like, ‘We’re in charge, and we get to make the decisions.'”

“Not only that, but [Barack Obama] grew [the “deep state”] to an enormous extent, too,” noted Strassel. “So more people, harder to keep track of, with more power. So this was a huge problem, and they came into the Trump administration saying, ‘We get to call the shots,’ but of course they don’t, right? We didn’t put in charge some unelected faceless bureaucracy to make decisions. We elect a president [and] members of Congress.”

Strassel said, “When Barack Obama finished his last year, the Federal Register — which is a list of all the rules and regulations in Washington — sat at more than 95,000 pages. It was an all-time record. After one year, the Trump administration [brought] that number down to 62,000, I think. …So it was the lowest number that had been there since the first year of President Clinton’s administration.”

Mansour asked if policy disagreements between presidents and bureaucratic consensus are being framed as impeachable offenses by self-styled “whistleblowers.”

“Many of these civil servants … are careerists who have very distinguished careers, perhaps [they] even mean the best using their own personal judgment in these matters — or swapping in their personal judgment where they shouldn’t — but at the same time, we can’t run a country with these faceless unelected officials [and] bureaucrats deciding that they know better than the electorate,” Mansour said.

Mansour continued, “The latest people that are coming forward — in Adam Schiff’s super-secret chamber — we’re seeing these people from the national security apparatus [whose] criticism of Trump’s handling of Ukraine is that they don’t feel that it was appropriate for the president to, in any way, put any sort of demand on his counterpart in Ukraine. That, to me, seems like a political accusation — or a difference in politics — and not necessarily anything that was wrong. Is this sort of part of the problem with these whistleblowers who are basically talking about a political difference with the president?”

Strassel replied. “Well, right, and one of the problems — the huge problem — of this entire impeachment farce that’s going on at the moment is that no one is being allowed to see their full testimony or how they hold up under questioning. This is the entire point of impeachment.”

“We’ve heard this narrative for years, that Donald Trump is undermining our institutions [and] breaking all of our standards, but if you look out there [and] if you step back, it’s actually the other side that’s violating so many norms, and that includes this impeachment drama that we are hearing, in that we’ve never had a situation in which the House has not voted for a formal impeachment inquiry — now, we hear that they’re going to do that later this week, I hope that they do, because that’s a measure of accountability — but everything is being done in secret, we’re only getting leaked bits of testimony where people hear this or that,” added Strassel. “It’s all designed to push a narrative, not necessarily to inform the American public about what is going on.”

Strassel continued, “So we have all these people that are coming and giving testimony but we don’t really know how they held up in testimony and what they really had to say, and this is a very dangerous precedent, because I keep warning people on the liberal side of the aisle that this is the precedent you’re going to set where we’re going to use impeachment as a partisan political tool, and we’re going to do it behind closed doors, and we’re going to have in essence a trial that nobody can see, there’s going to be a point where there’s a Democratic president and a Republican House and that situation is going to be turned around. Do we really want impeachment to be the way that we settle debates in this country?”

An investigation of the origins of the Obama administration’s surveillance of Trump’s presidential campaign is necessary, Strassel estimated. “I think it’s awesome that [William Barr] is having someone look into this, a neutral, non-partisan U.S. attorney — who’s going to come out at some point and say, ‘This was right. This was wrong.’ We need that in the United States. We need a reckoning of what happened, and as long as we have people who are willing to go into government and do that, I think we’re still on a good path. I’m an optimist.”