An unnamed person was shot outside MILO’s event at the University of Washington, amid outbreaks of violence as over a thousand anti-Trump protesters descended on the event. Hospital officials have confirmed to local news that the victim is in critical condition.

Seattle Police Department tweeted from their official Twitter account (@SeattlePD) that an unnamed person has been shot outside the venue where MILO is currently giving a speech. The tweet reads, “Officers working to remove one person with suspected gunshot wound to abdomen from crowd at UW campus demonstration. Developing.”

Officers working to remove one person with suspected gunshot wound to abdomen from crowd at UW campus demonstration. Developing.

The Seattle Fire Department have since updated the story that the victim is an “adult male [who has been] transported to HMC with possible life threatening injury from a gun shot wound.”

The University of Washington sent out two messages on its “Alerts” Facebook page, which it uses during emergencies. One warns students to stay away from the venue, while another identifies a possible suspect.

Police later confirmed that they are searching for this suspect. 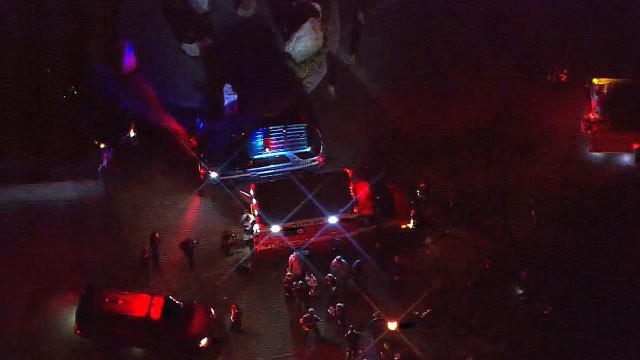 Police working on a gunshot victim in Red Square. Hit in the stomach. We heard a muffled bang and commotion. #ANTITRUMPMVMT @KING5Seattle pic.twitter.com/VH8QYhnbTg

The shooting was reported shortly after MILO took the stage to address an audience of students and fans at the University of Washington. After being informed of the shooting, he insisted that they could not cancel the event due to violence.

“The police have told me that it is indeed the case. We don’t really have a protocol for this. I don’t know if it was a fatality or not. Until I do know that, my suggestion is that the show should go on.”

“If I stopped my event now, we are sending a clear message that they can stop our events by killing people. I am not prepared to do that,” MILO continued.

Following the conclusion of his speech, police reportedly escorted MILO and his audience safely out of the building through an underground parking garage.

Police snuck Yiannopoulos audience out through underground parking garage after telling them to remove Trump hats.

Local news reports that the Mayor of Seattle, Ed Murray, has released a statement.

Statement from Seattle Mayor Ed Murray on tonight's shooting at the University of Washington. #komonews pic.twitter.com/nwRe90vZg8

The President of the University of Washington, Ana Mari Cauce, has issued a statement.

President of @UW issues statement after person shot at protest: "It is an outrage that anyone would resort to violence." #KOMOnews pic.twitter.com/6hEkSJmujk

Seattle PD say there were no arrests, “little use of force” and “no major violence” other than the shooting victim.

Chief O'Toole @SeattlePD says no arrests, little use of force today. Other than the shooting victim, she says no major violence. #KOMOnews