Australian state officials have declared athletes returning from the Tokyo Olympics will be required to quarantine for four weeks, with some being banished to remote outback camps for the duration.

All overseas travellers, including the nearly 500-strong Australian team, must spend 14 days in isolation at a designated hotel or special camp on arrival in the country, under strict national government coronavirus rules.

The South Australian (SA) government is going one step further by also insisting those heading back to the state from Sydney must repeat the two-week quarantine. This takes the total time in enforced lockdown to four-weeks.

The Australian Olympic Committee (AOC) on Wednesday slammed SA Health’s rules saying they “lacked common sense” and were both “cruel and uncaring” for 11 athletes and five support staff from South Australia.

The AOC says the South Australian Government's decision to ignore expert medical advice and the decision of National Cabinet by imposing a 28 day period for returning Australian Olympians poses a significant mental health risk for those athletes.https://t.co/V1Xk6StO0X

The AOC chief Matt Carroll said they had no choice but to send 16 South Australian athletes to Sydney for quarantine before booking them through to return to Adelaide.

He said upon finding out athletes would have to double quarantine in South Australia on July 30, the AOC applied for an exemption, but was denied.

He told Sky News Australia it is not only “disgusting”, but he feels “upset” for the athletes.

“There is no reason for it,” he said.

He stressed the athletes were an extremely low risk to the community following mass testing and coronavirus-safe protocols put in place by the AOC before, during and after the Tokyo events.

Australia is currently battling to control an outbreak of the coronavirus Delta variant, which has caused lengthy lockdowns in the major population centers of Sydney and Melbourne.

The state of New South Wales, where Sydney is located, recorded 345 new cases on Thursday while the national capital Canberra announced a week-long lockdown after a single infection was detected in the city. 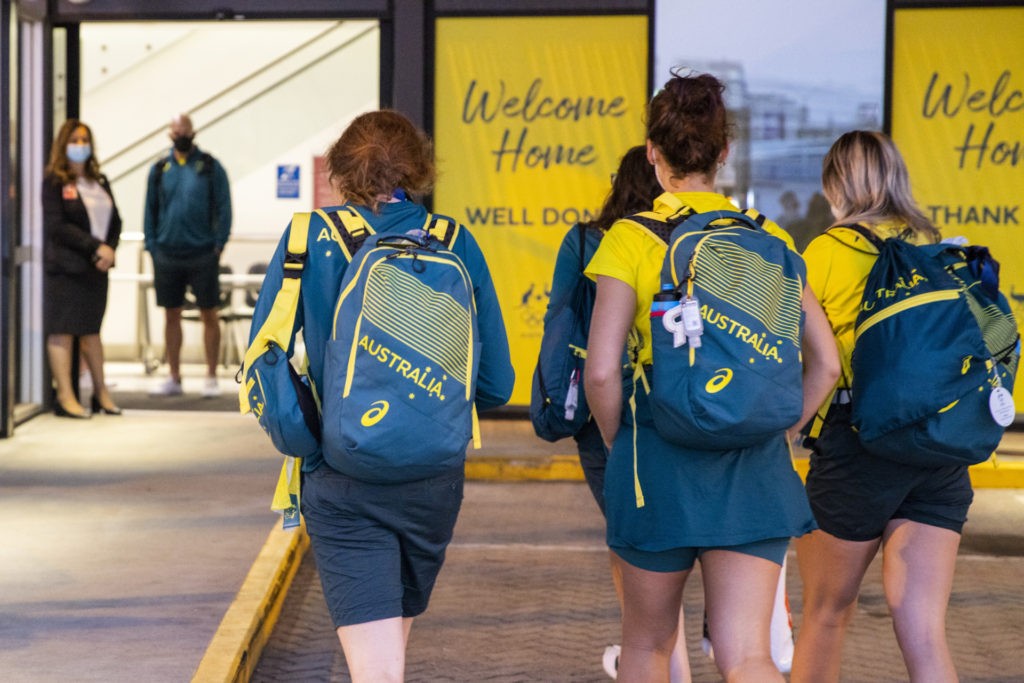 Australian Olympians walk towards the terminal after returning from the Tokyo 2020 Olympic Games, at Sydney International Airport and head straight for quarantine. (Jenny Evans/Getty Images)

Despite the rise in threats – real and apparent – Carroll added extra isolation would pose a “significant mental risk” for the athletes.

The entire Australian team, who won 17 gold medals and 46 in total, are fully vaccinated and were tested for coronavirus almost daily in Japan.