Former Ohio State coach Urban Meyer has flat out denied that he used a photo of Trayvon Martin to warn students against wearing hoodies, hats, and sunglasses in class.

In a New Year’s Day tweet, former player Marcus Williamson (class of 2021) accused Meyer of using the photo of the teen shot and killed in Florida in 2012 as an example of how not to dress during class in a Powerpoint presentation this year.

Trayvon Martin was, of course, wearing a hoodie at the time George Zimmerman confronted him.

My first team meeting. (True story 2017) This photo was presented to us via PowerPoint to institute our building wide rule of “no hoods” in the building pic.twitter.com/bGdJVZaEVT

Urban was asked about the matter, but he thoroughly denied it.

“Our team rule was no hats or hoodies or sunglasses of any kind but only in team meetings, just so we could see their eyes and make sure they were paying attention and not asleep,” Meyer told Ohio State reporter Jeff Snook. “We did not and never would show a picture of Trayvon Martin. My gosh, no.”

Urban added that the accusation is “absolutely false.”

“That is absolutely false, and you can check with any other player on my teams during that time to confirm what I am saying,” Urban continued. “Other players know what he is saying is false. I would never do that. He is crossing the line here. It seems people are just piling on now. But that never happened.”

Thus far, no other student — current or former — has stepped up to confirm Williamson’s claim or Urban’s denial.

The Jacksonville Jaguars fired Meyer after a disastrous few months as an NFL head coach. 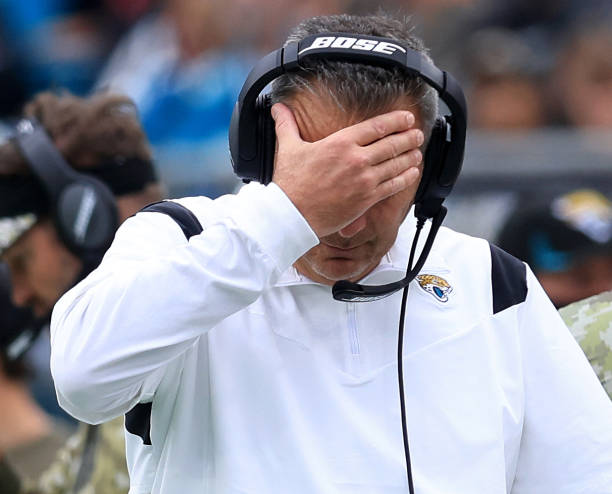 JACKSONVILLE, FLORIDA – NOVEMBER 28: Head coach Urban Meyer of the Jacksonville Jaguars as seen on the sidelines during the game against the Atlanta Falcons at TIAA Bank Field on November 28, 2021 in Jacksonville, Florida. (Photo by Sam Greenwood/Getty Images)

Meyer annoyed Jags owner Shad Khan for hiring strength coach Chris Doyle, who has been accused of being a racist. He also launched a failed effort to hire former NFL quarterback Tim Tebow as a tight end, a position that he had never played.