Former PGA Tour pro Mark Lye has been fired from his golf radio host job after saying, “I’d rather shoot myself” than watch the Women’s National Basketball Association (WNBA).

During his SiriusXM show, The Scorecard, on Saturday, the former PGA tour winner declared himself a fan of women’s golf while knocking the WNBA.

“You know, the LPGA Tour to me is a completely different tour than it was ten years ago,” Lye said. “You couldn’t pay me to watch. You really couldn’t. Because I just, I couldn’t relate at all.

“It’s kind of like, you know, if you’re a basketball player — and I’m not trashing anybody — please, don’t take it the wrong way — but I saw some highlights of ladies basketball. Man, is there a gun in the house? I’ll shoot myself than watch that,” he added. 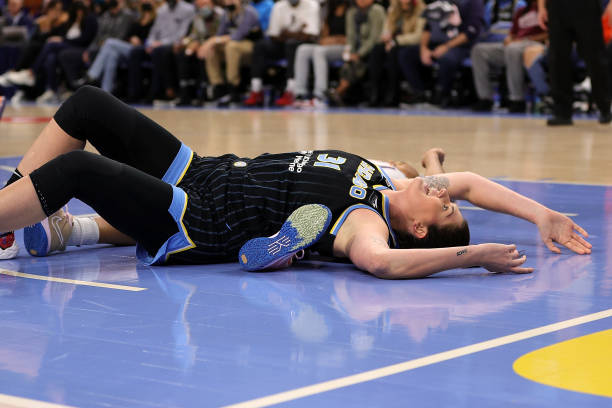 CHICAGO, ILLINOIS – OCTOBER 17: Stefanie Dolson #31 of the Chicago Sky reacts to an officials call during Game Four of the WNBA Finals against the Phoenix Mercury at Wintrust Arena on October 17, 2021, in Chicago, Illinois. (Photo by Stacy Revere/Getty Images)

A SiriusXM spokesperson later told Golf.com that it “will no longer be hosting” Lye over his WNBA comments. Lye confirmed to the outlet that he had been fired despite apologizing for it on the air that same day. “I was terminated about comments made about the WNBA, which I apologized for starting the next segment,” he said.

“Good luck getting some WNBA stars to come play for you,” another host interjected.

In a tweet following the firing, Lye rejected accusations of sexism.

“The fact that I can’t relate to WNBA does not make me sexist in any way. All you haters should listen to the whole segment, where I completely glorified women’s golf, which I love to cover. Thanks for listening,” the 69-year-old tweeted.

The fact that I can’t relate to WNBA does not make me sexist in any way. All you haters should listen to the whole segment, where I completely glorified womens golf, which I love to cover. Thanks for listening.