This summer, white, Western social justice warriors helpfully explained to Japanese-Americans why they should be offended over Westerners wearing a kimono at an interactive art exhibit in Boston.

According to the warriors of goodness, tolerance, and diversity, westerners who wore Kimonos were “appropriating” Japanese culture, thus committing a grievous act of oppression. According to SJWs, Japan is for the Japanese.

Actually, these anti-racism campaigners bravely went a step further: they demanded Japanese people be offended by the exhibit, despite the fact that it was commissioned by NHK, a Japanese broadcaster. “Japanese Americans don’t have the option to experience white culture just for fun,” read the sign of one protester.

Moved by the powerful, righteous, and entirely non-insane arguments of these campaigners, I’ve decided to examine my own track record of cultural appropriation. I can’t hide my sins against social justice forever. It’s time I came clean.

Some people merely adopted cultural appropriation. But I was born in it, molded by it. My mother’s side of the family is from India, and my father’s is from Britain, and I’m still struggling to understand how society allowed them to just go ahead and appropriate each other like that. It must have been a different era.

In year one of primary school I brought my auntie’s saree — a traditional Indian dress — for show and tell. At that point, I’d had no real contact with Indian culture and wore the saree purely because I thought it was cool. Only now do I realise what a diabolical oppressor I was.

But my worst transgressions have, without doubt, taken place in Japan. Cultural appropriation is bad enough in the country you inhabit, but to shamelessly adopt the traditions and heritage of a country you’re visiting as an oppressive Western tourist? I only wish I’d realised sooner how dangerous and exploitative my money and appreciation are.

Many foreigners to the country are leery of trying a traditional Japanese method of bathing, the onsen. And, honestly, getting completely naked in a room full of strangers is a little intimidating – especially if you’re a pudgy feminist whose activism springs from a pit of insecurity. Due to my thin privilege, it was all too easy for me to do it just for fun.

I wasn’t wearing my glasses, so I must have missed the inevitable looks of horror and disgust as I appropriated the Japanese designed bath full of Japanese hot water. I must also have misheard what I thought were expressions of contentment (kimochi ii!). Surely they actually said kimochi warui (gross). Alas I did not pick up on their discomfort and continued to exploit the Japanese tradition of soaking in water, ignorant of the damage I was causing. 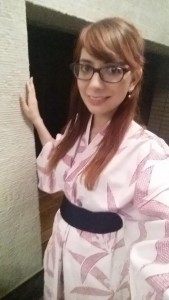 On a separate visit, I committed an even graver act of appropriation: I wore a yukata. And took pictures. And uploaded them to Twitter. (Why don’t they automatically censor such flagrant acts of racism? They should.)

I’ve even decided to appropriate the Japanese language. It was only after the heroic Boston protests that I realise I’d never asked a single Japanese person if that was okay, let alone the expert cultural scholars of Tumblr.

I should really be locked up for my crimes. But we live in a racist society that hasn’t banned appropriation yet, so I have to make my own amends. I’ve halted my studies until I receive permission from a representative sample of the Japanese population.

In my efforts to discern what would constitute such a sample, I’ve done a lot of research about exactly how many people need to be offended before something officially becomes “appropriation.”

The more I read, the more I feel critics don’t actually go far enough. The line between what is respectfully borrowed and what is unjustly appropriated is extremely arbitrary. As scions of white Western privilege, surely we have an obligation to be as broad as possible when defining what is offensive.

Really, I think the simplest thing to do would be to just separate cultures altogether. Then no-one would be offended by anything. Wouldn’t that be great? I almost have to wonder if it hasn’t been tried before.

Now I’ve done my progressive activism for the day, please confess your own wrongdoings in the comments.