His name is Gregory Alan Elliott. He has been on trial for three years, in a costly Canadian court battle with drastic implications for free speech. For two years, he was banned from the internet, where he previously earned much of his income. His artwork, hanging in a local coffee shop in Toronto, was recently defaced by a mob of enraged activists.

Crippled by loss of work and the ongoing court case, Elliott and his family have been forced to turn to an online crowdfunding campaign to cover their legal costs. What did he do to bring about such persecution? Did he kill someone? IS he a virulent white supremacist? A campaigner for pedophile rights?

No. Elliott criticised feminists on the internet.

The story begins in 2012, the heyday of online feminism, two years before GamerGate smashed the dominance of progressive activists on social media. Stephanie Guthrie, a young Toronto woman looking to raise her media profile, had a bright idea: she would lead a Twitter mob against a critic of professional feminist whingebag Anita Sarkeesian.

Her target was Ben Spurr, an unruly video games designer who had created a game that allowed players to punch an image of Sarkeesian in the face. He had previously done the same to conservative anti-games activist Jack Thompson; there was no public outcry. On Twitter, Guthrie plotted to “sic the internet” on Spurr, in a way that would “impact his real-life experience.” In other words, Guthrie wanted the kind of progressive online mob justice that is by now all too familiar to the rest of us.

Even for an age of establishment feminism in which potty-mouthed professional grievance mongers are elevated to sainthood, what happened next was extraordinary. In November 2012, Guthrie accused Elliott of “criminal harassment” on the basis of his tweets. She was joined by two other accusers, her Toronto feminists Heather Riley and Paisley Rae.

With no evidence showing that Elliott’s tweets were in any way threatening  – the arresting officer, Jeff Bangild, admitted as much in court – the reasonable course of action would have been for the authorities to throw out the case. Instead, Elliott was arrested, detained and charged by the Canadian crown. Thus began an arduous, three-year battle to clear his name.

He had more problems than a charge of criminal harassment. According to Gregory Elliott’s son, Clayton, the Canadian courts initially sought to detain him for the duration of his trial. This would have seen him jailed for more than three years.

Eventually, the Crown was persuaded to grant bail, although, as part of his bail conditions, Elliott was prohibited from using “the internet and any device with access to the internet.” A graphics designer by trade, this was crippling to his career. Before he even had a chance to figure out how to continue doing his job of 17 years with these restrictive bail conditions, he was fired without cause. Forced to withdraw his pension early, the 55-year old father of four has spent more than $50,000 in legal fees, and still owes a further $40,000.

Guthrie and Riley do not need to win their case. Without a serious surge in his crowdfunding campaign, Elliott’s livelihood has already been destroyed. The process has been the punishment – and it is still not over yet. But how were these feminist bullies allowed to get away with it?

The word “crybully” will be familiar to some Breitbart readers. Recently appearing in the Wall Street Journal, it describes a new breed of progressive activist that rapidly alternates between aggressor and victim. My own term for it is quantum superstate feminism.

The three women who accused Elliott fit this description perfectly. Christie Blatchford of Canada’s National Post describes how his accusers “convened a meeting of friends to discuss how Elliott should be publicly shamed; they bombarded their followers with furious tweets and retweets about him (including a grotesque suggestion from someone pretending she was a 13-year-old that he was a pedophile); they could and did dish it out.”

Their radical progressive supporters are no better. Recently, online activists started bullying a small Toronto coffee shop when they discovered it showcased Gregory Alan Elliott’s artwork. This culminated in an act of vandalism: one activist threw hot coffee over Elliott’s artwork as it hung in the coffee shop.

Crybully feminists are normally found on college campuses and Tumblr blogs, with mainstream society somewhat insulated from their excesses. In the case of Gregory Alan Elliott, however, his crybully persecutors had a powerful ally: the Canadian legal system.

Elliott was charged under Canada’s laws on criminal harassment which include the phrase “reasonably feared for their safety.” Laws based on subjective hurt feelings are feminism’s bread and butter.

Any objective person reading Elliott’s tweets would find it difficult to pinpoint what about them was so “threatening.” But here our story takes a Kafkaesque turn, for the cry-bullies had yet another ally: the Toronto Police Department itself.

Paisley Rae, one of the women who accused Elliott, has mates at the Toronto PD, say friends of Elliott. Deputy Toronto Police Chief Peter Sloly personally credited Rae for helping him enter the world of social media. In early 2012, she was a panellist at a Canadian police conference on the then-nascent world of social media.

Furthermore, Twitter archives show that Rae has maintained a friendly relationship with Detective Jeff Bangild, the officer in charge of the Elliott case, since early 2012. In 2013, while she was still a complainant in the Elliott case, she was still giving Bangild public pep talks on his social media presentations. With a question mark hanging over whether Elliott should have been charged at all, it’s little wonder that Rae, with her close connections to Toronto Police, dropped out of the trial.

But it didn’t matter. Elliott had already been charged. Caught between crybullies, Canada’s harassment laws and the overzealousness of Toronto law enforcement, did Elliott ever stand a chance?

There is only one force that could undo the damage caused to Gregory Alan Eliott by mendacious, bullying feminists and the Canadian legal system that enabled them. That force is the collective power of the internet. Unlike the establishment, the majority of the internet remains culturally libertarian, and is generally horrified by attempts to shut down speech and intimidate dissenters.

That’s the idea behind Freedom of Tweets, a campaign launched today on behalf of Gregory Alan Elliott. The campaign hopes to raise the $100,000 paid by Elliott in legal fees, and repair some of the damage to his livelihood and public reputation.

The campaign is co-ordinated by an acquaintance of mine, Lauren Southern, a ferocious Canadian libertarian activist who was, with me, thrown out of a slut walk in L.A. earlier this year for asking the wrong questions. I’ll be interviewing her about the case during a mammoth live stream this weekend, where we’ll discuss Elliott, freedom and free speech on the internet, and more. And, as always, I’ll be inviting some guests along too. 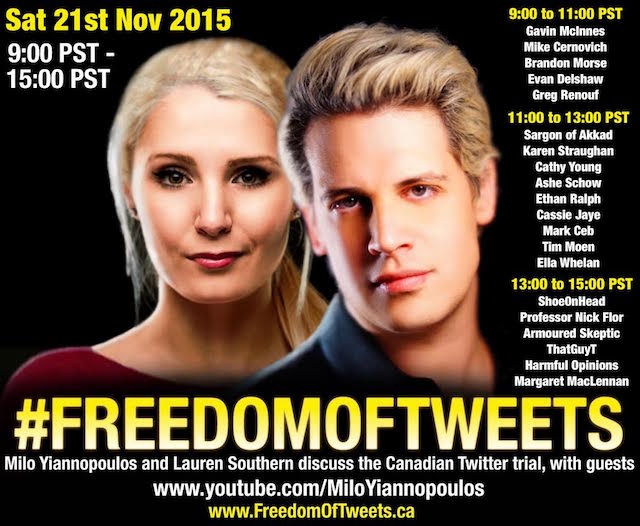 Southern told me today: “I hope that supporters of free speech on the web will recognise the importance of this case, and lend their support to Gregory Alan Elliott. Some good can come of this if we show the world that the public will be galvanised when an individual’s free speech is threatened.”

There are now two ways for the Elliott case to unfold. It will either set a dark precedent for free speech on the web, sending the message that feminists can exploit the legal system to ruin their critics. If so, their next targets will be journalists — hence my particular interest in the case.

Or it will show that the cultural libertarians masses of the internet can take on the establishment, reversing the damage caused to the victims of crybullies. Gregory Alan Elliott’s fate – and, in no small part, the fate of free speech in Canada and on the web – now depends on the internet. And me! Join us this weekend. You can subscribe to my YouTube channel in advance here.