Neil deGrasse Tyson made the decision a long time ago to be a sort of media cheerleader for science instead of an actual scientist, and although he isn’t a great communicator, it was the right decision because he was unlikely ever to trouble the Nobel committee. Also, he is stupid and his politics are dumb.

Tyson, whom liberals love because they are racists who can’t believe a black guy could be smart enough to be a scientist and so spontaneously ejaculate and soil themselves every time they see him on TV, hasn’t published anything of note for years. The advantage of being a celebrity scientist is that you don’t actually have to do any science. You’re exempted from the usual “publish or perish” rules.

Even when he was making a go of being a proper academic, Tyson didn’t exactly have the most glittering record. He didn’t get the PhD he was studying for at the University of Texas and had to go elsewhere for his qualification. Obviously, rather than take responsibility for his academic performance, Tyson has blamed racism. In reality, Tyson was playing in bands and appearing on stage instead of completing essays. Typical science PhD students are at any given time either studying, teaching or sleeping.

It’s tough to avoid the conclusion that much of what is frustrating about Neil deGrasse Tyson stems from identity politics and the victimhood ideology peddled by leftist academics and journalists. Despite all his media success, Tyson insists that racism is responsible for his academic failures, alluding to sinister “forces” that keep women and ethnic minorities down.

In 2005, he said: “I know these forces are real and I had to survive them in order to get where I am today. So before we start talking about genetic differences, you gotta come up with a system where there’s equal opportunity.” He of course doesn’t address the fact that the only reason Neil deGrasse Tyson is on television at all, given his intellectual shortcomings, is that he is black.

Perhaps realising how ridiculous he sounds, the world’s most celebrated populariser of science has stopped talking about race in interviews and says he has never given an interview whose primary focus is race since 1993. Which is something, at least.

Social justice-inspired grievance culture has flavoured much of Tyson’s output during his media career. Indeed, some observers say he’s more left-wing propagandist than rigorous thinker these days. His reboot of Cosmos, for instance, was saturated with progressive garbage designed to appeal to liberal-minded students and lefty geeks.

The problem is, every time Tyson plays to this crowd, he has to get his facts wrong to make the argument work. Take his gushing tribute to Giordano Bruno, who was burned at the stake. None of the details are correct. Bruno wasn’t a scientist: he was a cult leader who dined out on wild conjecture and guesswork.

Elsewhere in Cosmos, Tyson makes other serious errors. I say “errors” but for a man of his ostensible erudition you do have to wonder how these mistakes and bizarre claims keep creeping in. He says Venus is suffering from global warming, for instance. And I think we can live without the televisual trope of space ships making sound in space — unless Tyson is claiming no more astrophysical literacy than an episode of Star Trek.

Because he has given up on the scientific method in favour of progressive politics, Tyson has jettisoned fairness and fact in favour of slipperiness and propaganda: he is caught again and again repeating quotes that he appears to have simply made up, or which at a bare minimum are stripped of essential context or provenance. He shows no interest in correcting the record or addressing these mistakes — we’ll be diplomatic and call them mistakes — which does rather cast doubt on his entire benevolent genius schtick, don’t you think?

His Twitter feed, naturally, is packed to the gills with daft comparisons, meaningless apples-to-oranges number crunching and red meat for his hyper-progressive fan club.

Observers are left to conclude that Tyson is an attention-seeking media troll who courts adoration from bloggers, students and hipsters while picking off low-hanging fruit and mocking people he doesn’t like. But he often does this not with the master troll’s scalpel but the clumsy tin ear of the lumbering buffoon who pisses people off for all the wrong reasons, with cheap, sarcastic bait masquerading as sassy intellect.

Everyone remembers his infamous Christmas tweet, but what many don’t know is that even this is factually wrong: Newton wasn’t born on Christmas Day, but by today’s calendar some time in January. Oh, and by the way, Neil: Newton was a devout Christian who said the laws of nature were an expression of the divine will of God. Just like a lot of the other guys you look up to whom you conveniently forget to mention were men of faith.

Tyson has a complex relationship with the Almighty. He loves to bait Christians, despite claiming — at least some of the time — to be an agnostic. Incredibly, he believes that Christians have no right to call Scientology crazy. His silly, provocative comparisons between Christianity and Scientology are becoming a regular thing.

Needless to say, the argument against Scientology isn’t — or isn’t only — restricted to its goofy belief system or even that it’s essentially a tax dodge cooked up by a bad sci-fi writer. Rather, Scientology is a litigious, dangerous cult that cuts impressionable people off from their family and friends and brainwashes them into handing over all their money and devoting their lives to its comically absurd strictures.

Tyson pretends he doesn’t understand basic theology when responding to questions about the problem of evil. Here we are on Earth, the perfect habitat for humanity with a million random variables somehow ending up in our favour and the most Tyson can say is: “Every account of a higher power that I’ve seen described, of all religions that I’ve seen, include many statements with regard to the benevolence of that power. When I look at the universe and all the ways the universe wants to kill us, I find it hard to reconcile that with statements of beneficence.”

Neil deGrasse Tyson is a philistine with no love of learning except for popularisations and oversimplifications that serve his political purposes. Just look what happens when he’s asked about the study of philosophy: “I don’t have time for that.” Asking too many questions, he says, “can really mess you up.” For someone who so obviously wants to be laureate — and who is said to be lobbying hard for this behind the scenes — his attitude is unprecedented and his mystifyingly proud, deliberate ignorance an affront to science.

For all his pontificating about climate change and the evils of guns, Tyson seems unable to grasp some basic ethical realities: for instance, that science without ethics or philosophy is likely to produce weapons and all manner of stomach-churning experiments in cloning and on babies, stem cells and animals. It’s not like we haven’t seen that happen in history. Tyson actively ridicules those who ask us to consider the moral implications of our actions.

And he does all this with unearned and undeserved vanity and an intergalactic ego. He once even said: “Scientists are smart and doctors are stupid.” Tyson constantly situates himself in the big brain league, but he has done nothing in his life to demonstrate that he belongs there — and a lot to suggest he doesn’t. Not for Neil deGrasse Tyson the lowly, humble, intellectually curious aspect of the modest lab researcher.

And then there are the exaggerated claims. Tyson claims to have been “mentored” by Carl Sagan, for instance. Yet it appears this “mentorship” boils down to little more than a couple of traded letters. If Tyson thinks that qualifies as mentorship, I wonder what he’d call my nocturnal liaisons with other men who share his skin colour. Adoption?

As dumb as Tyson is, his fans are even more preposterously thick, which is probably to be expected given that they’re all liberals. But the extent to which they hoover up and retweet his contradictory and brainless provocations is matched only by the hilarity of the occasional social justice car crash, in which the politics of grievance that Tyson likes to encourage comes back to bite him. 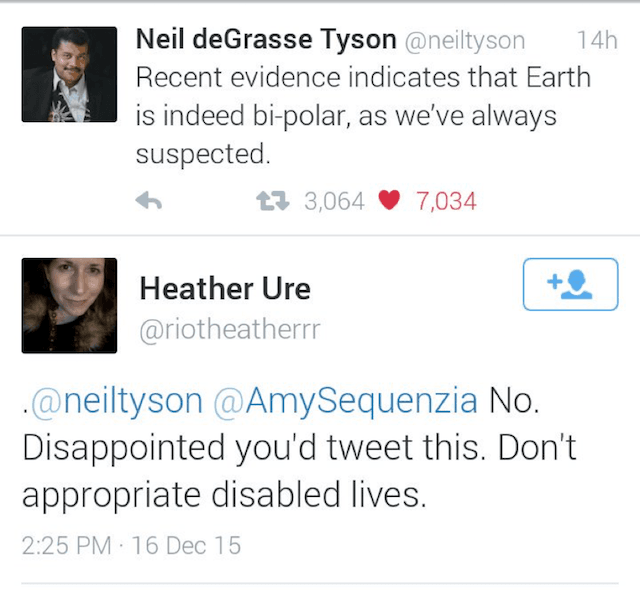 Does anyone learn anything from Tyson’s pop sci pronouncements? Who knows. But what little they do glean from his persnickety commentary on Star Wars v. Star Trek and his nitpicking about Interstellar and Gravity is called into question when his own shows make the same errors and his grasp of accuracy, sourcing and evenhandedness are shaky, to put it mildly.

There’s a silver lining to Tyson’s outsized notoriety, of course, and it’s that the internet always hurts the ones it loves: outside of reddit, and even within it, Tyson is known primarily as a meme. He has been reduced to a clutch of vacuous funny soundbites and obnoxious reaction images sprayed across image boards.

Tyson has been relegated to a place of widely-known obscurity where little is known about his ill-thought-out opinions and he’s instead celebrated for his facial expressions and attention-seeking media persona. Everyone knows his face, but few know or care to discover anything about the man or the views behind it. If you ask me, that’s a fitting tribute.