Since the implementation of Twitter’s new algorithmic timeline back in February of this year, conservatives, libertarians and anti-establishment dissidents alike have been waiting for the social media platform to interfere in the current U.S. election cycle. Now it seems that there is clear evidence of Twitter censoring the current Republican front-runner, Donald Trump.

A tweet sent from Trump’s account at 3:04 PM EDT yesterday is not visible from his timeline, even when showing “Tweets and replies.” That message included a video wherein Trump declared that “the establishment and special interests are absolutely killing our country.”At the time of this writing, the tweet is still publicly accessible via a direct link and thus has not been deleted either by Twitter or by someone operating on the Trump account.

This archive.is link has a copy of the timeline taken before this article was published which clearly shows the tweet not appearing where it should be — between a tweet sent at 12:10 PM EDT and one sent at 3:27 PM EDT; it is possible that the tweet may be reintroduced to the timeline in order to hide the manipulation. 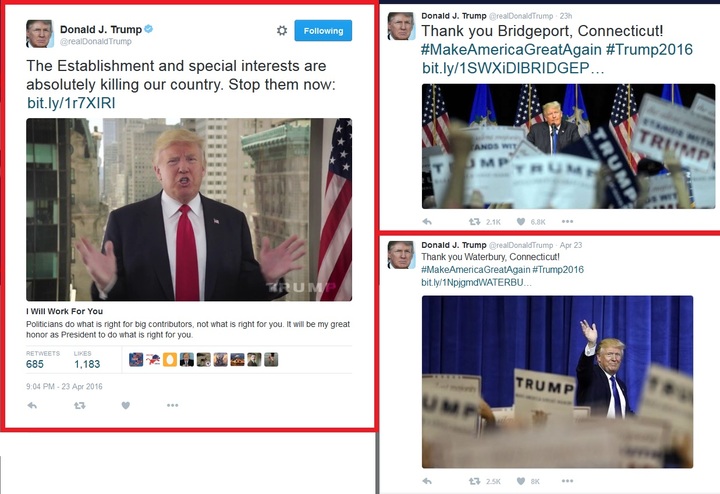 Milo Yiannopoulos, editor of Breitbart Tech, predicted 2 months ago that Twitter would seek to interfere with the primary process, noting that Twitter’s head of news, government and elections served as Deputy Chief of Staff for a Democrat senator from Louisiana in 2008, and that he is also a Term Member of the Council of Foreign Relations. A move to shadowban the tweets of the Republican front-runner would therefore not entirely be unexpected.

Unlike Twitter, Facebook has publicly declared that it will not seek to influence the election, insisting that it is “a neutral platform,” but it, too, has an algorithmic timeline and also has worked with German Chancellor Angela Merkel to remove anti-refugee comments from its site.

Breitbart Tech has reached out to Twitter for comment, but there has been no response so far.

Jack Hadfield is a student at Warwick Univeristy and a regular contributor to Breitbart Tech. You can follow him on Twitter here: @ToryBastard_.