A study from the Columbia Journalism Review (CJR) and funded by George Soros’ Open Society Foundation among others, shows that Breitbart News dominated right-wing coverage of the 2016 election and influenced narratives in the mainstream media.

Breitbart’s rise, according to the CJR’s writeup is “disconcerting.”

We have a less exotic, but perhaps more disconcerting explanation: Our own study of over 1.25 million stories published online between April 1, 2015 and Election Day shows that a right-wing media network anchored around Breitbart developed as a distinct and insulated media system, using social media as a backbone to transmit a hyper-partisan perspective to the world. This pro-Trump media sphere appears to have not only successfully set the agenda for the conservative media sphere, but also strongly influenced the broader media agenda, in particular coverage of Hillary Clinton.

Attacks on the integrity and professionalism of opposing media were also a central theme of right-wing media. Rather than “fake news” in the sense of wholly fabricated falsities, many of the most-shared stories can more accurately be understood as disinformation: the purposeful construction of true or partly true bits of information into a message that is, at its core, misleading. Over the course of the election, this turned the right-wing media system into an internally coherent, relatively insulated knowledge community, reinforcing the shared worldview of readers and shielding them from journalism that challenged it.

The study’s analysis of social media shares during the 2016 election shows Breitbart eclipsing most conservative and right-wing outlets, and challenging mainstream sources. 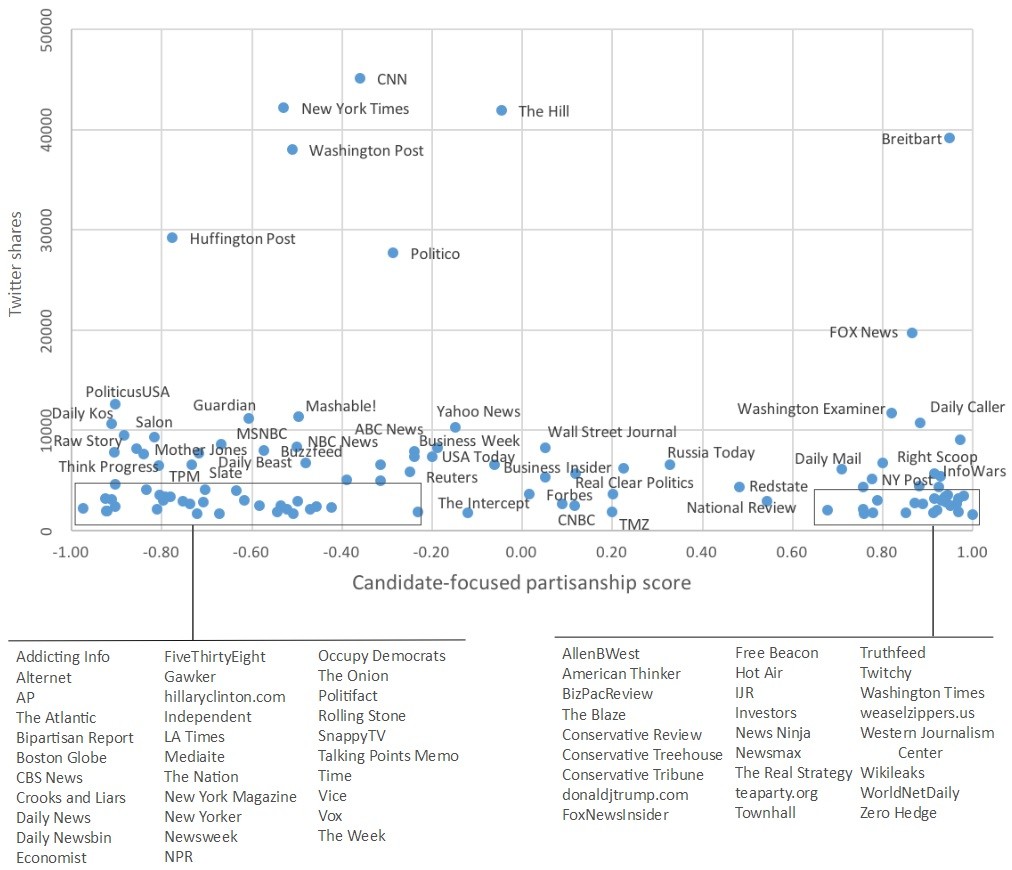 The study’s authors also argue that Breitbart’s coverage of FOX News during the Republican primaries successfully “sidelined” that organization, which only recovered its popularity on social media after the primaries had concluded, and the focus of Breitbart’s coverage shifted to Hillary Clinton and the Democrats.

This sidelining of Fox News in early 2016 coincided with sustained attacks against it by Breitbart. The top-20 stories in the right-wing media ecology during January included, for example, “Trump Campaign Manager Reveals Fox News Debate Chief Has Daughter Working for Rubio.” More generally, the five most-widely shared stories in which Breitbart refers to Fox are stories aimed to delegitimize Fox as the central arbiter of conservative news, tying it to immigration, terrorism and Muslims, and corruption.

What we find in our data is a network of mutually-reinforcing hyper-partisan sites that revive what Richard Hofstadter called “the paranoid style in American politics,” combining decontextualized truths, repeated falsehoods, and leaps of logic to create a fundamentally misleading view of the world. “Fake news,” which implies made of whole cloth by politically disinterested parties out to make a buck of Facebook advertising dollars, rather than propaganda and disinformation, is not an adequate term. By repetition, variation, and circulation through many associated sites, the network of sites make their claims familiar to readers, and this fluency with the core narrative gives credence to the incredible.

Read the  full study at the Columbia Journalism Review.