Donald Trump’s selection of his 2016 digital media director, Brad Parscale as his campaign manager for 2020 is a warning to the Masters of the Universe in Silicon Valley: rein in your left-wing biases.

The selection of Parscale, the digital guru of the 2016 election, also indicates that Trump has recognized the power of a digital-first strategy. In public interviews, Parscale has argued that social media, not traditional media was the key to Trump’s victory in 2016. His selection suggests that the digital campaigning will be given even greater emphasis in 2020.

I mean, one or two of us are going to have to leave our cushy tech jobs, at least for a bit, and ensure we do better than this guy. For real ya'll. https://t.co/lz5Z8wG01K

Trump’s digital campaign, headed by Parscale, was widely credited with outclassing his opponents helping him win the White House. Analyses in the left-wing tech magazine Wired and the Hill both spotlighted the superiority of Trump’s digital operation following the election. Trump’s digital engagement and social media follower counts eclipsed his opponents, allowing him to reach beyond the mainstream media and speak directly to his supporters.

Post-election analysis also highlighted how Breitbart News dominated its rivals during the election. An analysis of over 1.25 million stories published between April 1, 2015 and election day caused the Columbia Journalism Review to conclude that Breitbart “altered the media landscape” in 2016. During the campaign, Breitbart became the 29th-most trafficked site in America, and the third most trafficked pure news site. Facebook shares were a major part of this growth: as the CJR noted, Breitbart News was miles ahead of its competitors during the election, with only CNN and the New York Times amassing more Facebook shares. 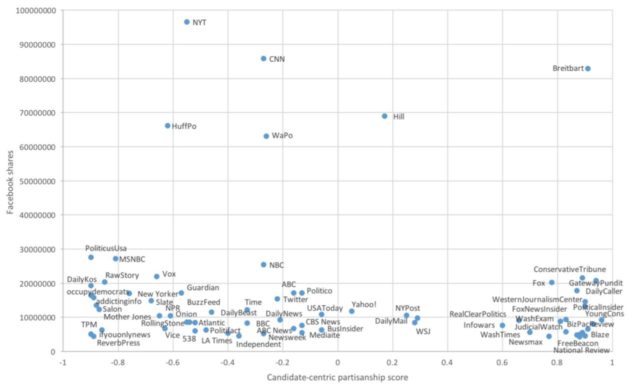 Mark Zuckerberg should be particularly worried by Trump’s move, because it means that Facebook is once again in the spotlight. Parscale believes that the social network was the key ingredient in Donald Trump’s victory over Hillary Clinton at the last general election. In an interview with CBS News’ 60 Minutes in October, Parscale said that Facebook “was the method” for beating Clinton, allowing the Trump campaign to “get to places and places possibly that you would never go with TV ads.”

“Now, I can find, you know, 15 people in the Florida Panhandle that I would never buy a TV commercial for” said Parscale, referring to how Facebook allows clients to “microtarget” ads to particular demographics.

Parscale’s belief in the power of Facebook is bad news for Zuckerberg, who has been under intense pressure from the mainstream media, Democrats, and left-wing employees inside his own company for “allowing” Trump to win in 2016.

During the campaign, anti-Trump employees pressured Zuckerberg to categorize Trump’s posts on the platform as “hate speech” and remove them. Some even threatened to quit the company if their demands were not met. Following the election, employees reportedly formed a “secret task force” to fight “fake news” on the platform.

The media also turned on Facebook after the election. Article after article accused the social network of spreading “fake news,” “bad information,” and helping Trump win the White House. The narrative stood in stark contrast to 2008 and 2012, when Facebook received virtually no backlash for its role in Obama’s victories. For the mainstream media, the power of big tech only seemed to become a problem when it helped “bad guys” win.

The other big post-election narrative was Russian propaganda on social media influencing voters. This also placed intense pressure on Facebook and other social platforms to engage in more censorship and exert more editorial control over their platforms. But even an anti-Trump researcher has acknowledged that the actual influence of Russian “bots” and “fake news” on the election result was virtually nil.

Parscale, too, has directly challenged this narrative, highlighting skeptical comments from Facebook’s own executives about the influence of Russian propaganda.

Here is the Vice President of Facebook Ads killing most of the media's #FakeNews narrative.
VP said:
* Seen all the ads
* Main goal was NOT the election
* Most money was spent after the election https://t.co/CXjBOI3v8t

The #FakeNews media continues to lie about the "Hoax".

* The hoax is the LIE that the campaign colluded with this Russian campaign
* The hoax is the Democrats want you to believe the Russians had real influence over the election.
* We never denied that Russians attempted. https://t.co/7TwvwQVaTV

Parscale’s awareness of the post-election spin, and his general social media expertise means that Silicon Valley can no longer assume that their moves to limit the reach of pro-Trump, conservative content on their platforms will continue to go unnoticed.

All major platforms, under pressure from Democrats and the mainstream media over the spread of “misinformation” and “fake news” have been recently making big moves to impose censorship on pro-Trump, populist voices online. YouTube has promised to promote mainstream news sources in their algorithm and clamp down on “conspiracy theories.” Twitter recently instituted a mass-lockout of Trump supporters, accusing them of being “bots.” And Facebook, in the most wide-reaching change yet, has altered its newsfeed to promote mainstream news sources over partisan news — a veiled attack on the Trump movement.

It would be surprising if Parscale, with his digital-first strategy, is not paying close attention to these developments. Representatives of the big tech companies have already been called out by Ted Cruz for anti-conservative censorship on their platforms. They can now expect to have a presidential campaign watching their every move as well — one year ahead of schedule.