Although Congress has focused on Facebook’s alleged censorship in recent weeks, Twitter continues to engage in mass bans of conservatives with little outside scrutiny. Increasingly, these bans come after users post “hate facts” — statements that are factually true, but politically inconvenient for progressives.

The most high-profile individual to be banned on this basis was Islam critic Tommy Robinson, who received a permanent ban from Twitter after he posted statistics showing that Muslims are vastly overrepresented in child grooming gangs in the U.K. Robinson is now taking Twitter to court to prove that “facts are now treated as hate.”

The censorship of British accounts is tied to increasing pressure from European governments for social media platforms to censor their users. Robinson claims that 10,000 Twitter accounts have been closed at the request of the U.K. government over alleged “hate.”

There are now concerns that the accounts of American users are also being shut down at the request of European governments. Nick Monroe, an independent journalist based in America, says he was banned from the platform after he began an investigation of Tell MAMA, an “anti-Islamophobia” organization based in the U.K.

The Home Affairs Select Committee, made up of lawmakers from all British political parties, has previously pressured Twitter into suspending accounts accused of “Islamophobia” by Tell MAMA. Faith Matters, the group that runs Tell MAMA, has previously provided evidence to the committee, and has been referenced during committee discussions of online “hate speech.”

Monroe’s account, which appeared to be permanently banned, was restored without explanation after Breitbart News reached out to Twitter for comment and after Monroe publicized the story on his blog.

Even when European politics aren’t involved, Twitter still punishes conservatives for making factual claims. Conservative twitter user Mark Samenfink had his account locked after claiming that black-on-black homicide was more common than other types of homicide and implying that Islamic terror attacks were more common than non-Islamic terror attacks. 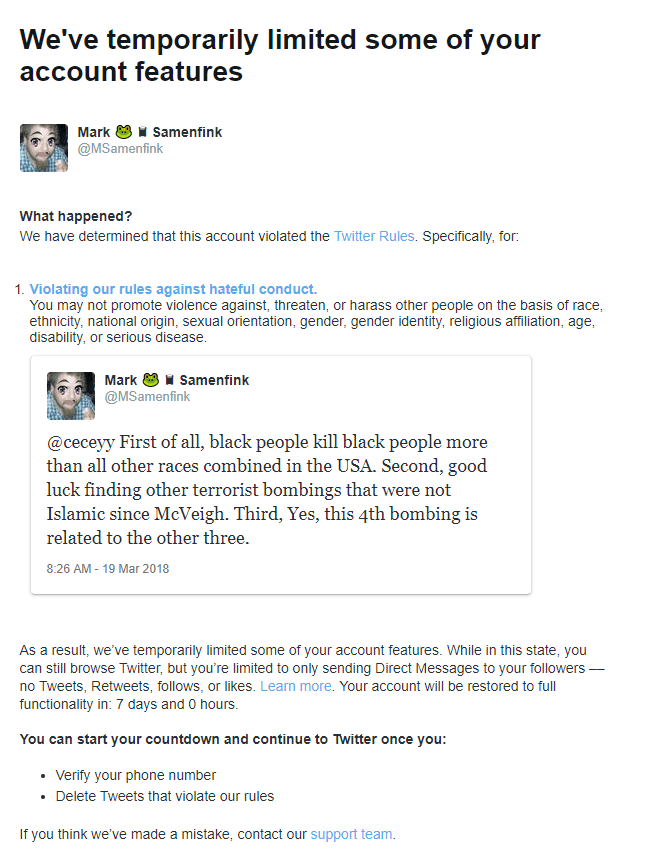 Twitter also fails to address attempts by left-wingers to game its reporting system. Pro-Israel account Ozraeli Dave was hit with a temporary suspension over a tweet in which he called out an anti-semitic tweet from another user.

Back from the one-week Twitter suspension – at least for now. Will I receive another one or even a permanent account ban, all for the crime of tweets exposing antisemites?

Lunar Archivist, a critic of far-left “Social Justice Warriors”, had his account locked after mocking the phrase “Kill All Men,” a misandrist meme pushed by feminists in pop culture.

So, let me get this straight, @TwitterSupport and @jack: I had my account locked for jokingly using the "Kill All Men" hashtag while referring to an issue of "Wonder Woman" and was forced to delete my tweet, but a bunch of people who've been dead serious while using it are fine? pic.twitter.com/ryW88cDw8a

This is to say nothing of the fact that Twitter has permanently banned more high-profile critics of progressivism than any other platform. In addition to Tommy Robinson, journalist Chuck Johnson, internet celebrity Milo Yiannopoulos, former Nixon and Reagan adviser Roger Stone, classical liberal YouTuber Carl Benjamin are all permanently excluded from the platform. Similar permabans of high-profile progressives are virtually unheard of.

In January, Twitter employees were caught on camera boasting about discriminating against pro-Trump, conservative accounts. One employee discussed shadowbanning political accounts, a practice that Twitter has continually denied using, while another claimed that accounts that expressed an interest in “god, guns, and America” were likely to be flagged as “bots.” Another employee, Mo Norai, explained that Twitter moderators regularly discriminated against accounts deemed to be pro-Trump.

Twitter’s double standards can be seen in the way it handles complaints of abuse against conservatives and individuals linked to conservatives. When the daughters of Islam critic Pamela Geller were bombarded with abuse earlier this year, Twitter did nothing. In fact, some of the abusive tweets remain on the site, undeleted.

If Republican lawmakers want to make an example of a company over political bias and censorship, it’s hard to think of a more clear-cut case than Twitter.