Free speech platform Gab has taken its site offline in advance of its web hosting being cut off, and has faced further blacklisting by Big Tech companies, including domain registrar GoDaddy, which told Gab to immediately transfer to another registrar or face suspension of its domain name, effectively holding the site hostage.

Gab, the free speech platform competing with the Silicon Valley Masters of the Universe, has been taken offline temporarily following hosting provider Joyent giving them just 48 hours to find a new host. While searching for a new host, Gab’s domain Registrar GoDaddy contacted the company to inform them that they had allegedly discovered content on the social media platform which “promoted and encouraged violence.” The warning noted that Gab must immediately transfer their domain registrar services to another provider or face the suspension of their domain, meaning Gab.com would not direct to their website wherever it is hosted.

The warning that Gab received can be seen below: 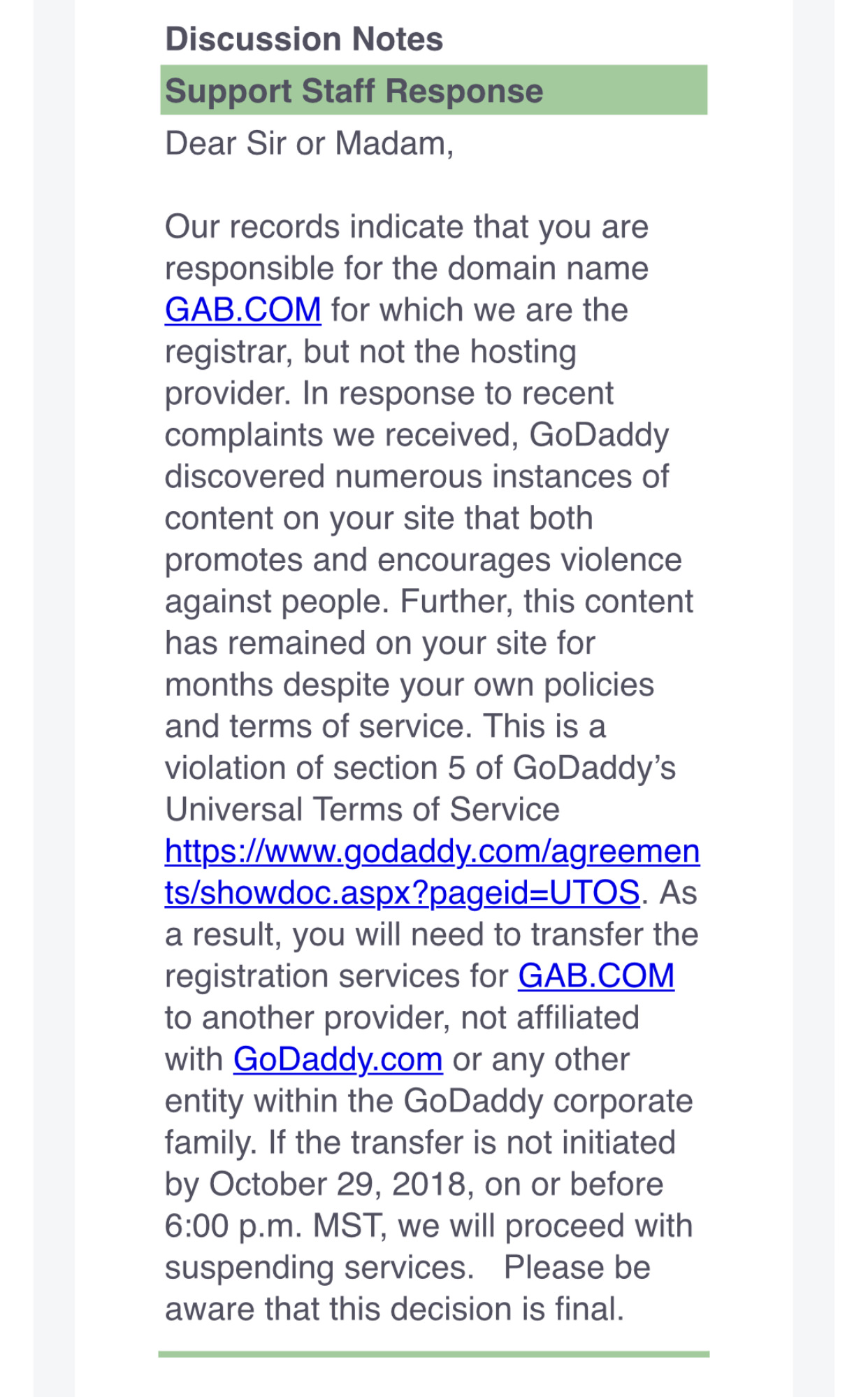 Payment processing services PayPal and Stripe have also informed Gab that they will no longer be allowing them to use their services. “When a site is allowing the perpetuation of hate, violence or discriminatory intolerance, we take immediate and decisive action,” PayPal spokesman Justin Higgs said in a statement to CNBC.

Since then, Gab has published a statement noting that they have been working with the Department of Justice and FBI to help them gain more information on the individual behind the shooting at a synagogue in Pittsburgh who allegedly had an account on Gab.com

Gab’s Chief Technical Officer, who lives in Turkey, also left the company, citing “attacks from the American press” for his departure from the upstart social media company:

Gab has regularly faced blacklisting, particularly from those in the tech industry such as Apple and Google. Breitbart News reported in August of 2017 that the Gab app for Android phones was banned from the official Google Play store, in December of 2016 Apple rejected the app from their app store. Despite this, Gab continued to grow in popularity, particularly following the suspension of conservative figures from other social media platforms, Gab gained approximately 16,000 new users after InfoWars host Alex Jones was banned from a number of social media platforms.

Gab is still currently inaccessible as the website moves to a new hosting provider, but the company told Breitbart News that they hope the downtime is limited to a few days.