The group posted an assembly location in a residential area of Aurora, Colorado, in an image on Facebook, which has yet to take the post down. The social network’s community guidelines lists the unsolicited posting of “personally identifiable information” as a violation of both its harassment and privacy policies.

“You should not post personal or confidential information about others without first getting their consent,” according to Facebook’s community guidelines. The posting of “private phone numbers or addresses” is specifically prohibited.

Responding to a comment request from Breitbart News, a Facebook spokeswoman said the assembly location posted by Abolish ICE Denver did not contain a private residential address and therefore did not violate the platform’s policies. The address is for a community center in the warden’s neighborhood.

In its post, Abolish ICE Denver described the Aurora, Colorado, processing center as a “concentration camp” that is involved in “neglect and torture.” The center is operated by GEO Group, and its warden, whose home the protesters plan to harass, is named Johnny Choate. 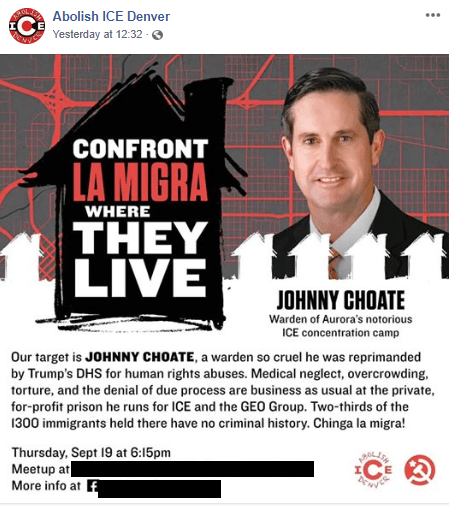 In a statement, a spokesman for GEO Group condemned the protesters for their plans to target Choate at his home, and defended the company’s track record. The spokesman emphasized that GEO Group previously provided the same “high quality, professional services” for eight years under President Obama.

GEO Group’s full statement is below:

In a post on their Facebook page, Abolish ICE Denver declared its intention to embarrass the GEO Group employee in front of his local community, calling on activists to “make sure every one of his neighbors knows exactly what they are living next to.”

People have been asking about ways to get involved in protesting the deplorable conditions and human rights abuses at the ICE concentration camp in Aurora, CO.

This camp is notorious for numerous outbreaks and quarantines, coverups, medical neglect, torture via solitary confinement (up to nine months) of trans, gay, and mentally ill captives, and was one of 4 camps nationwide that was recently reprimanded by *Trump’s own Department of Homeland Security* for human rights abuses. That’s unbelievably bad.

The protests, marches, and vigils are working –– high-level officials are shaking in their boots right now, knowing that the people of Colorado are continuing to escalate our DEMANDS for justice for the people held inside GEO.

We plan to peacefully assemble and exercise our First Amendment rights outside the home of Johnny Choate in Aurora, CO. Bring a sign, poster, musical instrument, and all your righteous rage and let’s make sure every one of his neighbors knows exactly what they are living next to.

Breitbart News will continue to report on Facebook’s application of its community guidelines.