Mercer University theology professor Chanequa Walker-Barnes wrote a prayer in which she asks God to help her “hate white people,” specifically, “the nice ones,” such as “the Fox News-loving, Trump-supporting voters” who “don’t see color.” She published the “Prayer of a Weary Black Woman” in the book A Rhythm of Prayer: A Collection of Meditations for Renewal.

“Dear God, Please help me to hate White people,” the professor began in her prayer, titled, “Prayer of a Weary Black Woman,” which was published in A Rhythm of Prayer: A Collection of Meditations for Renewal edited by Sarah Bessey. 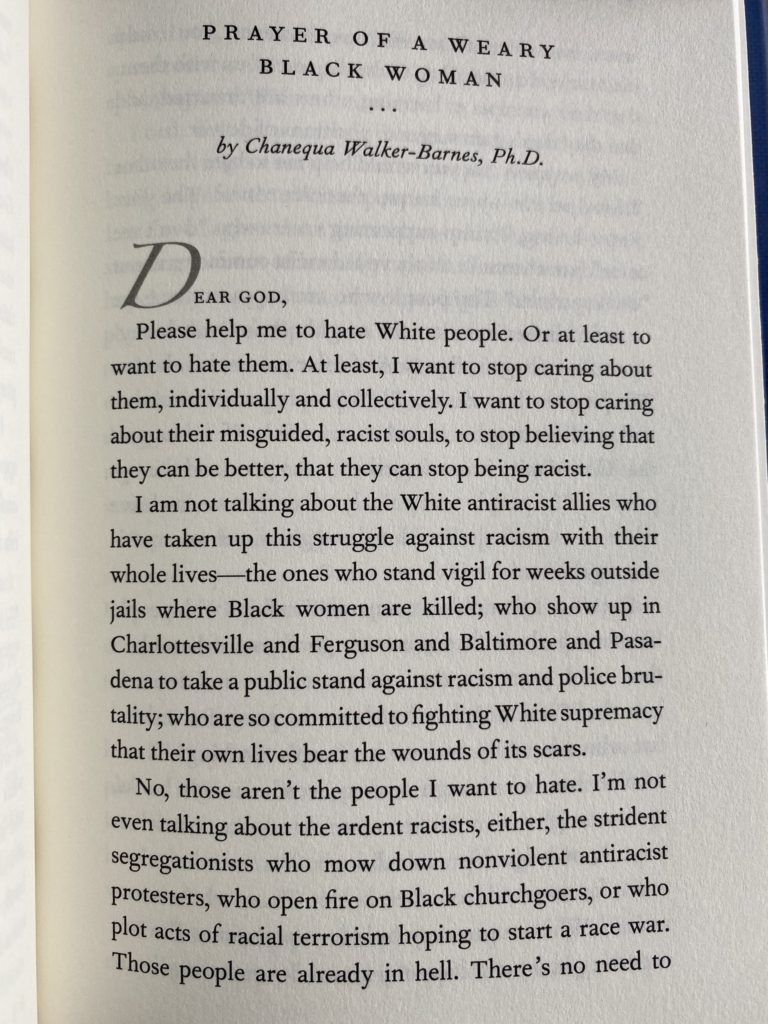 The professor went on to clarify that she is “not talking about the White antiracist allies who have taken up this struggle against racism with their whole lives,” nor is she even referring to “the ardent racists” who “plot acts of racial terrorism hoping to start a race war.”

“Those people are already in hell,” she wrote. “There’s no need to waste hatred on them.”

Walker-Barnes explained in her prayer that she specifically wants to hate “the nice ones,” who “don’t see color.”

“My prayer is that you would help me to hate the other White people — you know, the nice ones. The Fox News-loving, Trump-supporting voters who ‘don’t see color’ but who make thinly veiled racist comments about ‘those people,'” the professor wrote.

The people who are happy to have me over for dinner but alert the neighborhood watch anytime an unrecognized person of color passes their house. The people who welcome Black people in their churches and small groups but brand us as heretics if we suggest that Christianity is concerned with the poor and the oppressed. The people who who politely tell us that we can leave when we call out the racial microaggressions we experience in their ministries.

“But since I don’t have many relationships with people like that, perhaps they are not a good use of hatred either,” added the professor, who went on to ask God to instead help her “hate the White people who claim the progressive label but who are really wolves in sheep’s clothing.”

“Lord, if you can’t make me hate them, at least spare me from their perennial gaslighting, whitemansplaining, and White woman tears,” she continued.

“Grant me a Get Out of Judgement Free card if I make White people the exception to your commandment to love our neighbors as we love ourselves,” Walker-Barnes wrote.

Walker-Barnes is an associate professor of practical theology at Mercer University, according to the school’s website.

Mercer University did not respond to a Breitbart News request for comment.