Considering how incredibly rare it is to find balanced global warming reporting in the mainstream media, Noel Sheppard’s 4/24 NewsBusters headline was worthy of a double-take: “Retired Anchorman Apologizes for Presenting Both Sides of Global Warming Debate.” Having written an American Thinker article last year where I quantified the outright bias at the PBS NewsHour to be a ratio of 3 “skeptic” to 200+ “pro-Al Gore/IPCC” going back to 1996, I was puzzled. Who could it be? 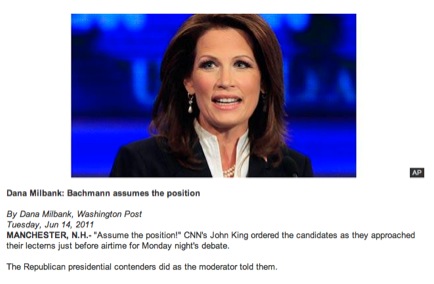 I was disappointed to see a name I didn’t recognize – imagine it being NBC’s Tom Brokaw. The bigger disappointment for me was in Sheppard’s third and fourth paragraph reproduction of the original Duluth Budgeteer article, where it said:

The TV newsman’s mea culpa about having misreported climate change came after of years of treating the story the same as he would any other, requiring the views of two opposing parties…

….climate change is not a pro or con issue; it’s a scientific fact. And journalists who work to “balance” a story present an inaccurate picture when they give equal weight to sources promulgating inaccurate facts.

The significance of that eludes most people, but I’d been researching the origins of the fossil fuel funding accusation against skeptic scientists for 16+ months, two of my articles about it are at Breitbart pages here and here, among a pile of others I’ve written. For me, the words “equal balance”/”equal weight” in reference to people pushing “inaccurate facts” jumped right off the page as yet another repetition of 15-year old talking points consolidated by anti-skeptic book author Ross Gelbspan and his associates at the Ozone Action enviro-advocacy group in 1996. For those not familiar with that group, just think Greenpeace because its founder John Passacantando merged Ozone Action with Greenpeace USA in 2000 and took over as its new executive director.

Regardless of that group’s motives, we have to commend them for fine-tuning their message into a concise 3-part mantra – settled science / skeptic scientists paid by fossil fuel industries to “reposition global warming as theory rather than fact” / the media gives skeptics too much unneeded attention. Even the dumbest of their followers can easily remember it.

So, I assumed the original Budgeteer article (now behind the newspaper group’s paywall), would have the ex-TV anchorman, Don Shelby, heartily praise Gelbspan for inspiring his apology. Surprisingly, it instead indicated Shelby got the idea entirely on his own. That prompted me to write an article at the American Thinker about this contradiction because a paragraph not seen in the NewsBusters piece stated:

Shelby said he used the skills of any good investigative reporter and followed the money. “Once I began to trace back the source and the politics of that approach to science … Things began to smell. I then started pointing out those facts”….

This isn’t merely a misconception on my part, the commenter at this page‘s link to the original article clearly says,

Mr. Shelby has stumbled into “the great dilemma” we all face and live with, each and every day… “Biased Reporting”, ‘cherry picking’, “distorting outcomes”…We need more men like him, to stand up and be counted and oppose this travesty of justice.

When I emailed the Budgeteer about Shelby’s apparent problem, they first said the report was about an event, not science debate, then asked if my email could be a letter-to-the-editor, even though I was just suggesting another look into the situation. It appeared online bizarrely headlined, “Shelby needs to provide irrefutable proof that scientific skeptics are wrong,” despite no such insinuation about that on my part. I politely offered specific word searches for them to try in relation to Shelby’s claims, but ultimately the editor to ask me on 6/3 not to contact them again because “we aren’t planning any additional coverage of the issue, especially with regard to Mr. Shelby’s stance and statements… Our top priority remains local-local news.” (Yes, he did type the word “local” twice).

A locally famous speaker making spectacularly questionable assertions to a group of university students is as local as it gets. Asking tough questions about the veracity of those involves neither science nor politics. When anyone seriously tries to get to the bottom of these, it is amazing what can be found. In my 6/2 article “Media Too Fair to Climate Skeptics,” say reporters who’ve been unfair to skeptics, I showed how there are very troublesome problems surrounding Ross Gelbspan and an often cited 2004 paper that supposedly proves the media was too fair to skeptic scientists, and in an exclusive I wrote for Marc Morano’s Climate Depot, I showed how Al Gore’s praise of Gelbspan as discoverer of coal industry memos supposedly proving the guilt of skeptic scientists is contradicted by words straight out of his own 1992 Earth in the Balance book.

People say there is no hope for the mainstream media, but the crack in their armor was exposed when CBS’ Bob Schieffer said in response to a wildly unsupported accusation from the White House’s David Axelrod on another matter, “Is that the best you can do?” When it comes to global warming promoters relying unsupported accusations to keep their issue alive rather than support their underlying science, this is perhaps better analogized by a Wall Street movie quote, where Charlie Sheen’s boss says, “Man looks in the abyss, there’s nothing staring back at him. At that moment, man finds his character. And that is what keeps him out of the abyss.”

Whether it’s a huge media news outlet or a small newspaper, the global warming issue is their abyss, and I’m just one of an ever-increasing number giving them this advice. I didn’t realize until Andrew Breitbart said it just recently, the name to put on this is citizen journalism:

All we did was ask of the mainstream media to correct their bias problem….but as a result of that, when they wouldn’t correct themselves, citizens said, “if you are not going to correct yourself, we’re going to create a media in the wake of your incompetency.”