On March 27, Josh Hicks of the Washington Post’s Fact Checker gave White House regulation czar Cass Sunstein one “Pinocchio” for his defense of the Obama administration’s regulatory record. However, the same article, a day earlier, was far more critical of the administration, giving Sunstein a total of three Pinocchios.

Below (as text, and in Word document at the end of the article) is a comparison of the first (3 Pinocchio) and the second (1 Pinocchio) versions of the Fact Checker article, with extensive changes indicated:

Based upon Fact Checker’s published standard, here is the difference between one and three Pinocchios.

1 – Some shading of the facts. Selective telling of the truth. Some omissions and exaggerations, but no outright falsehoods.

After the March 26th item was published, it promptly disappeared and was replaced with a notification: “This post was inadvertently published and has been temporarily removed by the editors.” See screen cap below: 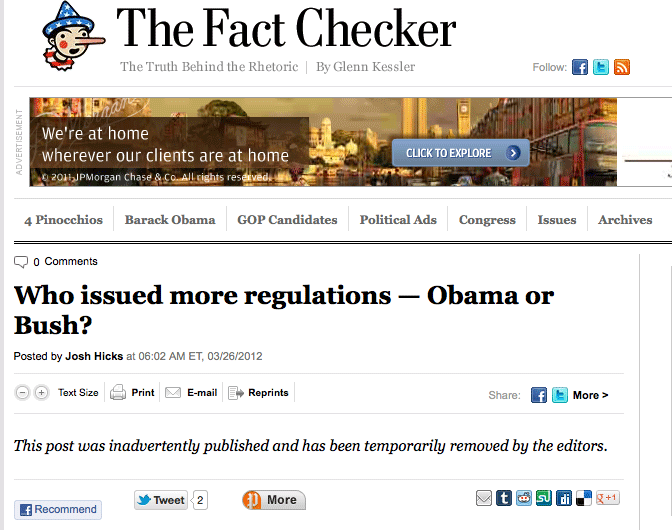 The Post gave no additional explanation; the notice was removed, and an all but re-written version of the Fact Checker item appeared the next day, with no acknowledgment of what had transpired during the 24-hour gap between the first and second items, now far more favorable to the Obama administration.

Along with significant amounts of text throughout the article, the two paragraphs below were removed from the summation:

Perhaps most importantly, Sunstein cherry-picked data from certain years to make Obama’s numbers look better than those from Bush’s time. We have no proof that any of his statements are factually wrong, but they omit very important information about stretches of time that could put Bush on top.

Sunstein said he never intended to disparage previous administrations. Still, he failed to give those other teams any credit for what they accomplished during their best regulatory years. He actually made them look like slouches, regardless of whether that was his intention.

One has to wonder how something went from “Perhaps most importantly” to all but irrelevant overnight, not to mention that the alteration remains unexplained to date by the Post‘s editors.

The Fact Checker appears to acknowledge, in the first version, that the Bush administration could emerge on top if the Obama administration left out “very important information” from its public statements.

What happened? The Post‘s readers deserve a clear explanation. In particular, it should disclose what, if any, contact it had with the White House in the time between the two items.

For now, the Post‘s Fact Checker looks to have surpassed four Pinocchios.