Politico, the unofficial web-branch of MSNBC, and whose staff spends more time on MSNBC than Chris Matthews, has a so-called reporter named Joseph Williams who all but called Mitt Romney a racist on Martin Bashir’s show today.

Williams says declaratively that Romney is only comfortable around white people.

But if you think the video clip is disgraceful, wait till you see Mr. Williams’ greatest tweets collection assembled below.

The full clip is actually worse.

Williams just isn’t any Politico reporter, by the way, he’s their White House Correspondent, but one who regularly shills for Obama on Twitter — furthering the Obama campaign’s talking points on race and Romney’s wealth.

Oh, and he also makes penis jokes about Ann Romney. 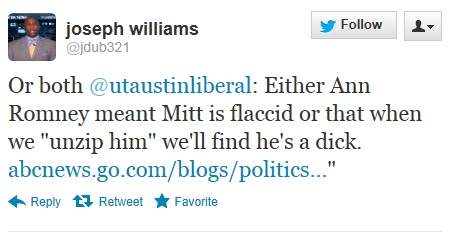 Picture of a Politico White House Correspondent in action…when he thinks no one is watching:

And naturally, NASCAR is racist, donchaknow:

This is our MSM.

This is why God created Andrew Breitbart.