The Huffington Post misquoted Ohio Governor John Kasich from a Wednesday Tampa event to make a comment of his seem racist.

According to author Jon Ward, the Ohio governor said that African-Americans need to be convinced that they can “come off the streets” and become small business owners. 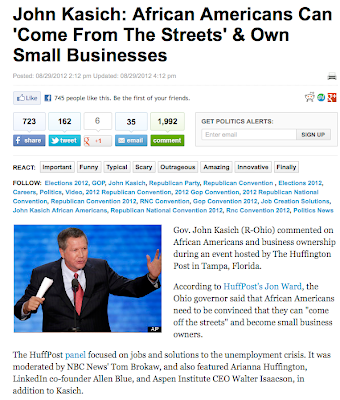 To illustrate his point, Kasich said he recently read an article about rap mogul, actor, and businessman Jay-Z, who is a minority owner of the NBA’s Brooklyn Nets.

“He’s running the whole God-darn place now,” Kasich said, referring to the Nets. “People like that, who have shown that they can come from the streets, and have a tough beginning and then be able to become incredible entrepreneurs, we’ve got to get that into our schools and the inner cities where we can show kids that hey, you can be what you want to be.”

Jay-Z, born Shawn Carter, grew up in the Brooklyn projects and his early life struggles are well known. Kasich was clearly speaking about Carter in this context.

The editors at Huffington Post have since changed the article. Ward, however, also tweeted the misquote, which was then retweeted by dozens of followers. He has not deleted the tweet or corrected the quote on his timeline.