The New York Times‘ coverage of the radical Islamist attacks on 9/11 on the U.S. embassy in Cairo and the U.S. consulate in Benghazi begins–like the Obama administration–with acknowledging “anger” over an anti-Islamic film, not with the attacks themselves–and criticizes Republican Mitt Romney’s statement on Obama’s apology.

The Times’ headline, “Anger Over a Film Fuels Anti-American Attacks in Libya and Egypt”–Update: buried on page A4!–does not even inform readers that U.S. diplomatic missions were attacked, or the fact that one official in Libya was actually killed.

The article goes on to criticize Mitt Romney for his allegation that “the Obama administration’s first response was not to condemn attacks on our diplomatic missions, but to sympathize with those who waged the attacks.”

Because the U.S. embassy’s (unauthorized) apology was offered before the attacks, which the embassy later condemned the Times concludes that Romney was “[a]pparently unaware of the timing of the first embassy statement.” But that is nonsense, for three reasons–first, because the U.S. State Department had, as of last night, apologized for the film without condemning the Egypt attack; second, because the apologies by the U.S. Embassy continued throughout the day, though they were later sheepishly deleted; and there was no need for the U.S. to apologize at all for a film made by a private individual, least of all on the sacred 9/11 anniversary.

What the Times is really outraged about–more than the attacks themselves, perhaps–is that the events have placed the Obama administration’s foreign policy of appeasement in a deservedly bad light.

Hence the focus on the mobs’ alleged pretext for attacking American diplomats; hence the opinionated charge–unsubstantiated–that the Romney campaign was unaware of the timing of the apology and the attacks.

Update: Among the articles that made the front page of the Times rather than the embassy/consulate attacks are an article looking back at Mitt Romney’s stance on Vietnam in the 1960s, and a story about how the gay marriage issue is affecting a state senate race in upstate New York. 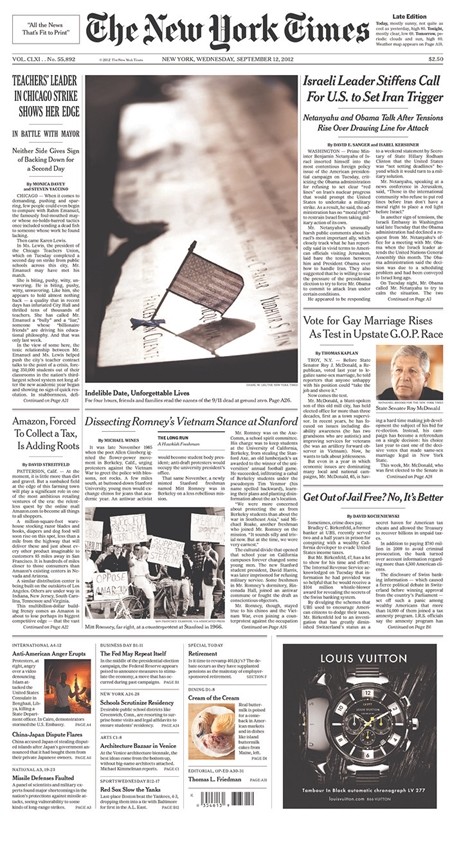