After PolitiFact rated as “mostly false” a joke made by Republican Senator Ted Cruz, using all the known and provable qualities associated with PolitiFact, Breitbart News engaged in an exhaustive, science and fact-based investigation in order to find a way to perfectly describe the people who run the fact-checking site. We went where the facts led us, and the facts led us to the objective conclusion that PolitiFact is run by gigantic assholes.

Here’s how the final “Gigantic Assholes” conclusion was made.

PolitiFact’s fact check against Senator Cruz was the first piece of data used in our study.

For all the partisan reasons we’ve come to expect, PolitiFact’s W. Garner Selby published a no-win, reputation-damaging “fact check” against Senator Cruz over a joke that was obviously meant to be intentionally hyperbolic in order to illustrate a larger point.

Here is the Cruz joke PolitiFact rated as “mostly false”:

Here, we have Thanksgiving, we have Christmas, we have the 4th of July. Every year in Iran, they celebrate death to America day, which is the anniversary of Iran in the 1970s taking Americans hostage.

In order to come to the conclusion that Cruz’s morally clarifying piece of humor was a lie, PolitiFact scoured news archives and hassled no less than five “academic authorities” to see if there is an official “Death to America” holiday in Iran.

What PolitiFact discovered is that like that road-crossing chicken and that saucy farmer’s daughter, there is no official Death to America holiday in Iran.

At this point our study found only that PolitiFact was run by “pedantic left-wing gotcha trolls.”

Like Senator Cruz, Breitbart News found that when fact-checked humor used by Democrats does not hold up to scrutiny.

“Recently, [Romney’s] campaign criticized me for slow-jamming the news with Jimmy Fallon. In fact, I understand Governor Romney was so incensed he asked his staff if he could get some equal time on ‘The Merv Griffin Show.'” — President Obama  4/27/12

Breitbart News could find no public record of Governor Romney ever asking his staff for a spot on “The Merv Griffin Show.” Speaking exclusively to Breitbart News, a high-level Romney staffer responded to our inquiry with, “What the f*ck are you talking about?” The White House refused to respond to any of our inquiries, as did everyone associated with the “Merv Griffin Show.” Because they are all dead.

Breitbart News had no choice but to give the president a “Pants-On-Fire.”

“Four years ago, I was locked in a brutal primary battle with Hillary Clinton. Four years later, she won’t stop drunk-texting me from Cartagena.” — President Obama 4/27/12

Although Breitbart News was able to confirm President Obama was indeed locked in a brutal campaign with Hillary Clinton in 2008, and that she has traveled to Cartagena, we were not able to confirm the texts referenced by the president.

Apparently, during her time as Secretary of State, in violation of clear government regulations, Ms. Clinton stashed all of her official and personal State Department communications on a secret server at a black-site somewhere in Chappaqua, New York.

Furthermore, earlier this week, Ms. Clinton stated that she had deleted all of her personal communications. Breitbart News believes drunken texts to President Obama would likely fall under the category of personal.

(NOTE: Should we discover later that some of Clinton’s texts read — I told all the grieving families we’d get that dumbass filmmaker, then I hit ’em up for a Clinton Foundation donation. Now I’m all rotflmfao — Breitbart News reserves the right to change our ruling.)

Also working in the president’s favor is the fact that as Secretary of State, Ms. Clinton accomplished nothing. Therefore drunken tweets are not out of the question. She had to fill her time somehow.

Breitbart News rates this use of humor from President Obama as “Sadly Believable.”

With this additional but still incomplete data, our study now found that PolitiFact is run by “dicks.”

PolitiFact Has Never Fact-Checked a Democrat’s Use of Humor

As firm believers in science, we knew that on its own the fact-check of the Ted Cruz joke was not enough data to conclude our study of the people who run PolitiFact. This led us to see if PolitiFact had ever rated as “mostly false” an obvious joke told by any Democrat to make a larger political point.

Using Google, PolitiFact’s own site, and a secret Internet-thingy Halliburton only offers right-wing extremists, Breitbart News searched PolitiFact for every political joke or humorous hyperbolism used by a Democrat.

What we found is that not a single use of humor by any Democrat has ever been fact-checked by PolitiFact, much less rated as “mostly false.”

With this additional but still incomplete data, our study now found that PolitiFact was run by “racist dicks who see Hispanic conservatives as uppity apostates who must be taught a lesson.”

Wanting to be as exacting as possible, Breitbart News added three small but still crucial pieces of data that led to the final conclusion that PolitiFact is in fact run by “Gigantic Assholes.”

1. The author of the Ted Cruz fact check starts his name with a “W.”

2. This week, PolitiFact chose to fact-check Ted Cruz’s humor but not statements made by Hillary Clinton during her press conference about her secret stash of government emails.

3. In its fact-check, PolitiFact itself did not capitalize “death to America day” when quoting Senator Cruz:

Here, we have Thanksgiving, we have Christmas, we have the 4th of July. Every year in Iran, they celebrate death to America day, which is the anniversary of Iran in the 1970s taking Americans hostage.

If PolitiFact truly believed Cruz was talking about an actual holiday, PolitiFact would have capitalized “Death to America Day.” We believe this is conclusive proof of PolitiFact’s intentionally dishonest literalism. 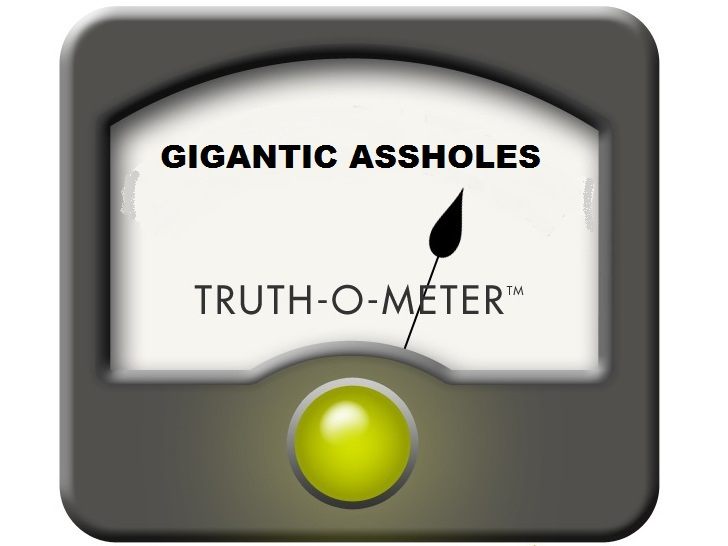 — a stupid, incompetent, or detestable person

— worst place —used in phrases like asshole of the world

PolitiFact did not immediately respond to our request for comment.